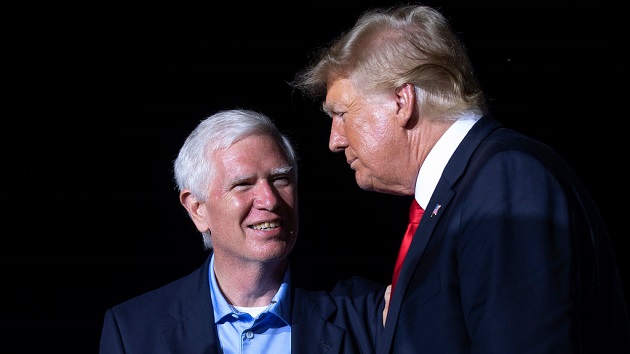 “The word he used was ‘rescind,"” Brooks said in a phone interview with ABC News, describing what he said Trump first started telling him last September. “We didn’t get into the details [of how it would happen] because it’s legally impossible. And I explained that fairly promptly.”

Brooks first disclosed his conversation with Trump in a statement released after Trump on Wednesday withdrew his endorsement in the Alabama GOP Senate primary.

In his statement, Trump called Brooks “woke” and criticized him for suggesting Republicans move on from the 2020 presidential election.

“Since he decided to go in another direction, so have I,” Trump said. “I will be making a new Endorsement in the near future.”

Brooks, who was one of Trump’s staunchest conservative allies in the House and proponent of his unfounded claims of widespread election fraud, told ABC News that Trump “did not give me a heads up” about withdrawing his endorsement in the Senate primary, where he has lost ground to Katie Britt, a former senior aide to retiring Sen. Richard Shelby, R-Alabama.

In his statement Wednesday, Brooks said he told Trump the actions he sought to undo the election results were illegal, and that “neither the U.S. Constitution nor the U.S. Code permit” what he requested.

Taylor Budowich, a spokesman for Trump, did not respond to an email seeking comment on Brooks’s claims, and whether Trump asked other lawmakers to “rescind” the election results.

Brooks told ABC News he has not been contacted by the House select committee investigating the Jan. 6 Capitol attack about his conversations with Trump, and wouldn’t say if he would cooperate with their inquiry.

A spokesman for the panel, which has requested testimony from GOP Reps. Kevin McCarthy of California, Jim Jordan of Ohio, and Scott Perry of Pennsylvania, declined to comment. In letters to Jordan and McCarthy, the panel said it was interested specifically in the lawmakers’ conversations with Trump around the attack on the Capitol.

Brooks, one of the leaders of the Jan. 6 effort to challenge the election results on the House floor, rallied Trump supporters in a speech outside the White House before the Capitol attack. He also met with Trump and other key allies repeatedly at the White House over plans to object to the results, in an effort to delay the certification.

“Today is the day American patriots start taking down names and kicking ass,” he said to the crowd.

Brooks later said he was not condoning violence at the Capitol that day.