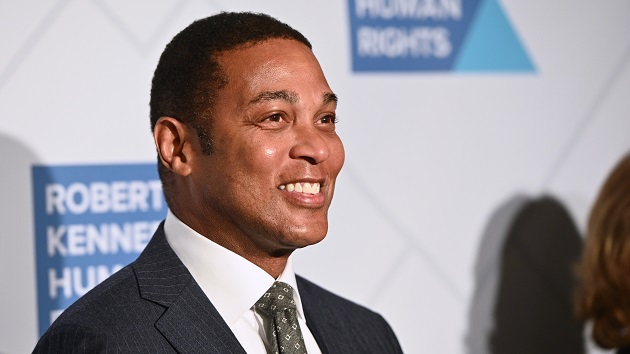 (WASHINGTON) — CNN anchor Don Lemon wrote in his new book that former President Donald Trump was the president the country “deserved” and probably “needed” in 2016 because he exposed racism that had gone unrecognized by many white people.

Lemon’s book, “This is the Fire: What I Say to my Friends About Racism,” is a nod to James Baldwin’s “The Fire Next Time.” In it, the anchor of “CNN Tonight with Don Lemon,” writes, “It breaks my heart and burns my tongue to say it, but in 2016, Donald Trump was exactly the president we deserved and probably the president we needed in the way you need symptoms that alert you to a disease.”

On ABC’s “Powerhouse Politics” podcast Wednesday, Lemon explained, “Here’s why I said that. Because I think we had been sort of lulled into this false sense that we were somehow living in a post-racial society — so to speak, not a completely post-racial society. We had elected a Black president, and everything was moving along swimmingly and we thought that we were going in the right direction towards progress.”

“And then all of a sudden, a Donald Trump comes along and he pulls the wool off of everyone’s eyes, well, mainly white people– about the racism that was just beneath the surface that maybe people who were part of the larger culture did not see or didn’t recognize, but people of color saw it and felt it,” he added. “And he exposed that so that for the world to see.”

Lemon pointed to open displays of racism like the violent 2017 “Unite the Right” march in Charlottesville, Virginia, and protests at statehouses over the last year, as examples.

“It was undeniable, the racism that was — that’s in this country, that was hiding just beneath the surface, undeniable. There it was,” he said. “And guess what, as a person from the South, who grew up with the Klan passing out literature in front of my high school on weekends because there was a church across the street, and those were the people they thought could relate to them best, this Baptist Church, I would rather know who those people are.”

The book, released on March 16, discusses racism and the legacy of slavery, often weaving together Lemon’s personal experience, reporting and historical research.

The CNN anchor said he decided to write it after the killings of Ahmaud Arbery, Breonna Taylor and George Floyd in 2020.

“I said I have to do something beyond my platform because so many people were calling me and asking me what should I do. I don’t want my kid to grow up in a world like this. I don’t have the language to be able to talk to my kids or my friends about this, and quite honestly, Jonathan, they’d say, ‘you’re my Black friend. I love you, help me out,"” he told ABC News Chief Washington Correspondent Jonathan Karl.

“The Fire Next Time” is dedicated and addressed to Baldwin’s nephew. Lemon’s book begins with a letter to his nephew, who he said was the same age.

“I was feeling guilty about the world that I had made — helped to create and that he was going to inherit,” he said. “And I sat down, I wrote a letter, and I said this is what James Baldwin was talking about, this is the fire. We’re in it now. And that’s how the book came about.”

On “Powerhouse Politics,” Lemon also discussed being a journalist during Trump’s presidency and explained why he wrote in the book that “it’s time to have a point of view, not just an opinion.”

“Because of who Donald Trump was and is, it’s a time to have a point of view, it’s not necessarily a time for opinion,” he said on the podcast. “And having a point of view and having an opinion — two different things. A point of view is based in truth. An opinion isn’t always about truth.”

“So when I give my point of view on my show, it’s always based in fact,” he added. “I’m just giving you how I feel as a person of color, as a person who has a prime-time show on CNN, as a gay person, but I’m not giving you lies.”