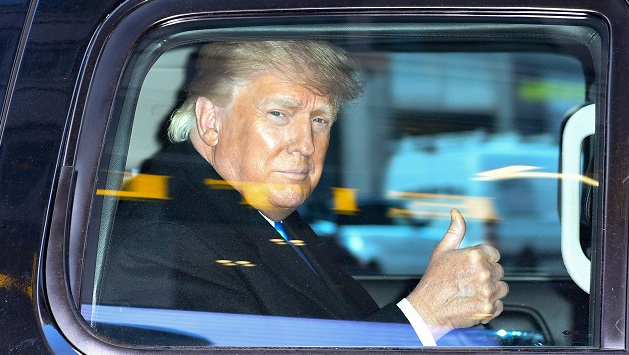 (WASHINGTON) — In a December phone call with the chief investigator in Secretary of State Brad Raffensperger’s office, former President Donald Trump insisted he won Georgia’s presidential election, telling the investigator “the country is counting on” an audit that was launched to determine whether the signature verification process for mail ballots was done properly in the state’s third largest county, according to an audio recording of the call.

“This country is counting on it because it’s very interesting. … I won everything but Georgia, you know, and I won Georgia — I know that — by a lot, and the people know it, and you know, something happened there. I mean, something bad happened,” Trump told the chief investigator, Frances Watson, according to the recording of the six-minute call, which was first obtained by The Wall Street Journal, and later obtained by ABC News.

The former president goes on to tell Watson, “When the right answer comes out, you’ll be praised. … People will say, great, because that’s — that’s what it’s about, that ability to check it, and to make it right because everyone knows it’s wrong.”

The existence of this new audio recording comes amid a criminal probe of Trump’s efforts to overturn the results of the November election in Georgia, which he lost by 11,779 votes. At the center of that investigation, which was launched by the Fulton County district attorney’s office last month, is an hour-long phone call Trump had with Raffensperger on Jan. 2. In that call, Trump spewed baseless conspiracy theories and falsehoods about the election and pleaded with Raffensperger to “find” the exact number of votes he needed to win Georgia. Trump has denied wrongdoing, and his impeachment attorneys disputed he “acted improperly in that telephone call in any way.”

A spokesperson for Trump has not responded to ABC News’ request for comment.

Raffensperger announced on Dec. 14 that investigators in his office, in coordination with the Georgia Bureau of Investigation (GBI), would conduct a signature match audit of absentee ballot envelopes, saying there were specific and credible allegations that signature matching wasn’t done properly by election officials in the June primary. A total of 15,118 absentee ballot oath envelopes, which is where voters sign, were randomly selected to be audited.

The audit was completed on Dec. 29, and investigators only discovered two ballots that should not have been accepted as they were and should have undergone the “cure” process. But the GBI director also made clear that neither of those two ballots were fraudulently cast.

According to the recording, Watson assured Trump that her team and the GBI are “only interested in the truth and finding, you know, finding the information that’s based on the facts.”

ABC News previously reported on this call’s existence in January. At that time, a source familiar with the matter said Trump had told Watson to “find the fraud” and that she would be a “national hero” for it. Those exact words are not spoken in the audio recording of the call. In a follow-up conversation, that source told ABC News that that was how Watson had interpreted the president’s words and how she described the call to this source.

When the call was first reported on, ABC News did not identify the investigator because the source sharing the call’s details asked Watson remain unnamed due to the threat environment election officials were facing. In this recording, however, Trump identifies her by name.

ABC News has reached out to Watson for comment about the call and audio recording, but has not heard back. However, ABC’s Atlanta affiliate, WSB, also obtained the recording and spoke exclusively with Watson.

“It is something that is not expected, and as I mentioned in the call, I was shocked that he would take the time to do that,” Watson told WSB’s Mark Winne.

She also said she didn’t feel she was being pressured and that no investigative agency had requested the phone call.

In a statement, Raffensperger’s spokesperson, Ari Schaffer, said, “This phone call is just one more example of how Secretary Raffensperger’s office’s public comments also reflect what was said in one-on-one conversations: We would follow the law, count every legal vote and investigate any allegations of fraud. That’s exactly what we did, and how we arrived at the accurate final vote tally.”

In the recording of the call, Trump references Watson meeting with his chief of staff, Mark Meadows, and Watson indicates that happened a day prior to the call. ABC News previously confirmed Meadows was in Cobb County attempting to observe the audit taking place on Dec. 22. Raffensperger’s deputy, Jordan Fuchs, said at the time that she did not allow Meadows to enter the room where investigators were working, but did allow him to stand in the doorway.

Trump does much of the talking throughout this call, rambling at times about his electoral victories in other states, like Florida, Ohio, Alabama and Texas, implying those wins are evidence that his loss in Georgia was impossible.

“Whatever you can do, Frances, it would be — it’s a great thing. It’s an important thing for the country, so important. You have no idea, so important. And I very much appreciate it,” he said, according to the recording.

Near the end of the call, Trump asked Watson whether investigators will be working through Christmas, saying, “Because you know we have that date of the 6th, which is a very important day.”

Jan. 6 was the day Congress counted the electoral votes, the last step in the certification process of President Joe Biden and Vice President Kamala Harris’s victory.

That morning, Trump told a crowd of supporters at a rally, “I know that everyone here will soon be marching over to the Capitol building to peacefully and patriotically make your voices heard. … We fight like hell. And if you don’t fight like hell, you’re not going to have a country anymore.”

It wasn’t long after that when a mob of Trump supporters and violent extremists descended upon the U.S. Capitol, overcoming police to infiltrate the nation’s seat of government, forcing lawmakers and then-Vice President Mike Pence to seek safety as insurrectionists attempted to obstruct Congress and Pence from following through with their constitutional duty to affirm Biden’s win.