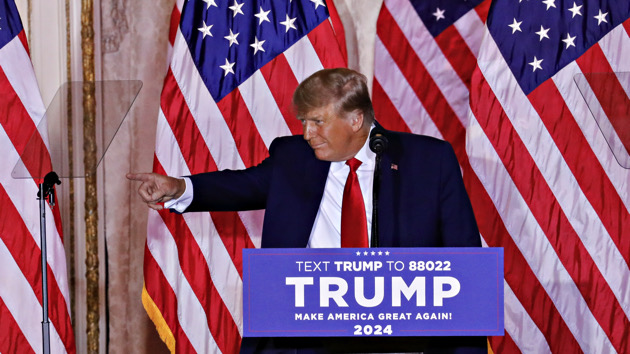 (PALM BEACH, Fla.) — A prominent adherent of the QAnon and “pizzagate” conspiracy theories posed for photos with former President Donald Trump at his Mar-a-Lago resort Tuesday night after speaking at an event hosted at the club, according to the photos and videos posted to social media.

The event came two weeks after Trump had dinner at Mar-a Lago with rapper Ye, formerly known as Kanye West, who recently spoke positively about Hitler, and far-right YouTuber Nick Fuentes, who the Department of Justice has labeled a white supremacist. The meeting sparked outrage despite Trump’s claim he did not know who Fuentes was.

Videos and photos posted to social media appear to show Liz Crokin, a prominent promoter of QAnon and pro-Trump conspiracies theories, speaking at an event at Mar-a-Lago and later posing for photos with Trump. In one photo, the duo make a “thumbs up” sign together.

According to social media posts, the event was billed as a fundraiser in support of a “documentary” on sex trafficking — one of the pillars of the QAnon conspiracy theory. The website for the film, which includes multiple falsehoods and claims of mass sex-trafficking in Hollywood, boasts that it is “Banned by YouTube, Facebook, Instagram, Twitter, and PayPal.”

“You are incredible people, you are doing unbelievable work, and we just appreciate you being here and we hope you’re going to be back,” Trump said in remarks to the crowd, according to a video of his speech.

A representative for the Trump campaign did not respond to ABC News’ request for comment.

“Tonight I had the privilege and honor to speak at America’s Future fundraiser to combat child trafficking at Mar-A-Lago,” Crokin wrote in a social media post, claiming that while she was at Trump’s club she discussed “Pizzagate” — a viral conspiracy theory that falsely claims prominent Democrats were running a child-sex trafficking ring out of a pizza shop in Washington, D.C.

Crokin has expressed her belief in the conspiracy theory as recently as 2020. In an interview with Salon, she said the theory had not been debunked, according to the outlet.

Crokin was featured in the HBO Docuseries “Q: Into the Storm.” In a video, Rep. Marjorie Taylor Greene said she first was introduced to the conspiracy theory by Crokin.

According to a report on an another interview she gave, Crokin said of Trump that as president, Trump was “dismantling the deep state and one of his top priorities is to end sex trafficking.”

Crokin did not respond to ABC News’ request for comment on the event or whether she still believes in QAnon and “pizzagate” conspiracy theories.

In recent weeks, Trump’s newly announced 2024 campaign has been playing defense on multiple fronts. On Wednesday, Trump’s namesake real estate company was found guilty by a jury in New York of tax fraud. Last week, Trump on social media called for “termination” of “of all rules, regulations, and articles, even those found in the Constitution” over false claims of election fraud.