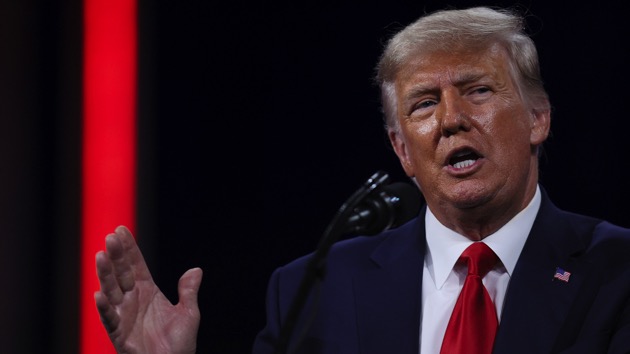 By MORGAN WINSOR and WILL STEAKIN, ABC News

(WASHINGTON) — Former U.S. President Donald Trump is urging supporters to send donations directly to his political action committee, Save America, amid clashes with the Republican National Committee over its fundraising efforts.

Trump, who is said to be considering starting a new political party, issued a statement Tuesday warning donors of “RINOs,” or Republicans in name only, and “fools.”

“I fully support the Republican Party and important GOP Committees, but I do not support RINOs and fools, and it is not their right to use my likeness or image to raise funds,” the former president said. “So much money is being raised and completely wasted by people that do not have the GOP’s best interests in mind. If you donate to our Save America PAC at DonaldJTrump.com, you are helping the America First movement and doing it right. We will WIN, and we will WIN BIG! Our Country is being destroyed by the Democrats!”

The statement comes a day after RNC chief counsel Justin Riemer sent a letter to Trump’s attorney, Alex Cannon, pushing back on a cease-and-desist demand to stop using the former president’s name and likeness in the committee’s fundraising appeals. Riemer’s letter, reviewed by ABC News, stated that Trump had “reaffirmed” to RNC chair Ronna McDaniel “over the weekend that he approves of the RNC’s current use of his name in fundraising and other materials, including for our upcoming donor retreat event at Palm Beach at which we look forward to him participating.”

The Republican party is keen to tap into Trump’s popularity among conservative voters to raise money ahead of next year’s midterm elections and to help elect GOP candidates. But Trump, who made his fortune in licensing, appears to want to control the use of his name and image.

Since leaving the White House, Trump has made it his top priority to try to steer donations away from the RNC and into his new super PAC, Save America. He has released multiple statements calling on supporters to donate.

Following the 2020 presidential election last November, in which Trump lost to Democratic rival Joe Biden, the former president raised millions of dollars for Save America, with help from the RNC, while pushing baseless claims of voter fraud. Trump didn’t spend any of the money on his legal challenges against the election outcome, despite telling supporters to donate to an “election defense fund.”