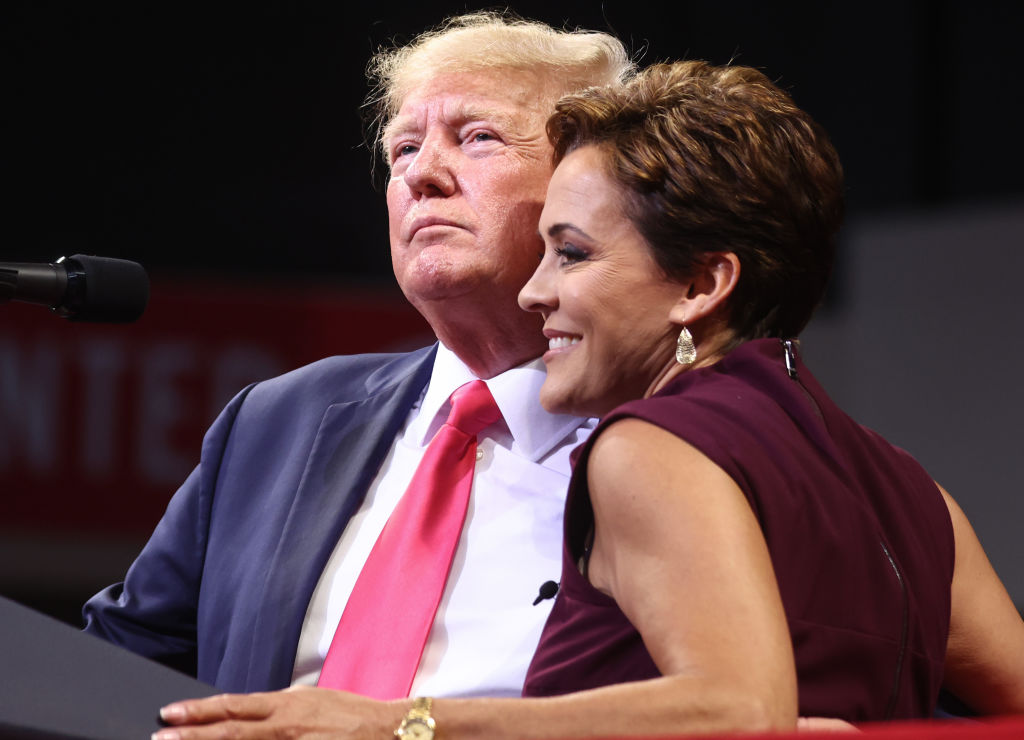 (PHOENIX, Ariz.) — Republican candidate for Arizona governor Kari Lake, a former Phoenix news anchor who has seized the conservative spotlight in recent weeks, was careful not to forget former President Donald Trump when she joined Florida Gov. Ron DeSantis at a rally Sunday, even as DeSantis seeks to raise his national profile ahead of a potential presidential run against Trump.

“Someone said, ‘Kari, you’re going to be the DeSantis of the West,’ Lake said to an adoring crowd that organizers said numbered up to 4,000 supporters. “Honestly, other than being called ‘Trump in a dress,’ that is the greatest compliment you could pay me, and I appreciate that. And that means that you know what you will get with me — you’re gonna get somebody who fights for you every single day.”

Outside the rally in downtown Phoenix, notably located in Maricopa County — the state’s most populous– MAGA supporters dressed in “Trump-DeSantis” gear, with “Vote Lake & Blake” signs and chanting “Let’s Go Brandon!” lined up for several hours in more than 100-degree heat. The first man in line said he’d been there since 3 a.m. local time to see DeSantis headline the event with Lake and U.S. Senate candidate Blake Masters, also endorsed by Trump.

The “Unite and Win” rally was hosted by Turning Point Action, a conservative youth group founded in Arizona by activist Charlie Kirk, who blasted the FBI for escalating what he called a “paperwork dispute” with Trump.

“They raided our president’s home. There is no going back from this everybody,” Kirk said. “The raid at Mar-a-Lago only makes me like Donald Trump even more,” prompting many in the crowd to a standing ovation in apparent agreement.

Notably, both Trump-backed Abe Hamadeh, candidate for Arizona attorney general, and secretary of state candidate Mark Finchem, who like Lake and Masters espouse without evidence Trump’s “big lie” that the 2020 election was stolen, were not on the schedule with DeSantis, though the four ran as a primary slate. But Finchem, who has previously identified as an Oath Keeper and was in Washington on Jan. 6, 2021, was front row and center in the audience, and people cheered for him as he walked up to the venue.

DeSantis stopped earlier in Carlsbad, New Mexico, and delivered a similar stump-like speech in Phoenix Sunday, ticking through his anti-COVID, anti-transgender policies in Florida and criticizing the federal government, all without once mentioning Trump’s name.

“I think the difference between today and when [President Ronald] Reagan was here is these federal agencies have now been weaponized to be used against people the government doesn’t like. And you look at the raid at Mar-a-Lago, and I’m just trying to I’m trying to remember, maybe someone here can remind me, about when they did a search warrant at Hillary’s house in Chappaqua,” DeSantis said, going on to sow doubt in the federal government’s top law enforcement agency.

Republicans across the board were quick to defend the former president when the FBI conducted a search of his Mar-a-Lago estate, with Arizona candidates, including Lake and Rep. Paul Gosar, leading calls to “defund the FBI” two years after the GOP lambasted Democrats for “defund the police” slogans in the wake of George Floyd’s murder. As the federal agency says it’s fielding threats to agents, dozens of individuals gathered outside the FBI field office in Phoenix to protest the raid one day before DeSantis dropped in.

“They’re enforcing the law based on who they like and who they don’t like. That is not a republic. Well maybe it’s a banana republic, when that happens,” DeSantis said.

For her part, Lake has blasted the raid on TV hits on conservative media outlets and on Twitter, all but suggesting Arizona should secede from the country, but only briefly mentioned the Trump search in her half-hour remarks, tacked onto an attack on Democrats for passing the Inflation Reduction Act and in support of arming school resource officers.

“They decided to hire 87,000 armed IRS agents to go after us in case we’re late on our taxes. Can you imagine if they hired 87,000 school resources and armed them? We’d have safe schools,” she said. “And then these people sent politically motivated, federal agents to President Donald Trump’s home and raided it. How dare they? Joe Biden, we have had enough,” she went on, shaking her finger.

Lake laced her stump speech with praise for DeSantis for being a “fighter” in his response to COVID-19 mandates and criticized California Democratic Gov. Gavin Newsom and Michigan Democratic Gov. Gretchen Whitmer, who she called, “Witch-mer,” in Trump-like name-calling.

“Amidst all of the insanity, there was one governor who stood out in the crowd and he was talking about he’s right up there, right now. And his name is Governor Ron DeSantis,” she said to cheers.

But when she added that he had what she called “BDE” — “Big DeSantis Energy” — she made sure to say Trump has it, too, careful not to fall out of favor with her most famous supporter.

“[DeSantis] has a backbone made of steel. I’ll tell you what he’s got. I don’t know if you’ve heard of this, but he’s got the B-D-E,” Lake said. “Ask your kids about it later. I call it ‘Big DeSantis Energy.’ Right? He’s got the same kind of BDE that President Trump has.”

Returning her enthusiasm, DeSantis met Lake’s call on border security, a top campaign issue as she’s said she’ll declare an invasion on “Day One.” He said he told Lake, “Look, if you’re willing to put people on that border and keep them from coming in to begin with, I’ll send National Guard to help with that,” to roaring applause.

Before invoking the Bible in his closing, the Florida governor called on the crowd to “have the courage to stand in the way of the Brandon administration.”

DeSantis will make stops later this week in Ohio and Pennsylvania, which governor’s candidate Doug Mastriano said Saturday he would like to make “the Florida of the North,” to boost Republican candidates in battleground states ahead of the midterm elections including his own. But leaving his home state to do so further suggests he’s testing the waters for something bigger.

“There’s no doubt Ron DeSantis is the second biggest draw in the Republican Party. But Trump is still the biggest draw. And right now, they do have a common goal of electing people like Kari Lake,” said Barrett Marson, a longtime Republican strategist in Arizona.

“There’s room enough to have two national supporters in these races. It’s not like the battle between Pence and Trump, where they took opposite candidates. Here, they’re on the same team,” he told ABC News, referring to races like the governor’s primary in Arizona where former Vice President Mike Pence backed a candidate competing with Trump’s.

DeSantis’ rallies, announced last Monday morning, still risk being overshadowed by the Mar-a-Lago search that has dominated headlines since last Monday night. Trump, DeSantis’ primary opponent if both decide to run, continues to tease announcing his bid own before the November midterms — and while he’s fielding a barrage of legal issues.

Asked this week about Trump saying that he would not oppose the release of documents related to the search, Lake told ABC News the “overreach” would only encourage more MAGA supporters to get out and vote.

Her first public reaction was a lengthy statement on Twitter calling the Biden administration an “illegitimate, corrupt Regime” which “hates America and has weaponized the entirety of the Federal Government to take down President Donald Trump,” adding, “We must fire the Federal Government.”

Masters tweeted the search was “politically motivated” and “should terrify us all.” And DeSantis, for his part, tweeted: “The raid of [Mar-a-Lago] is another escalation in the weaponization of federal agencies against the Regime’s political opponents, while people like Hunter Biden get treated with kid gloves.”

Their Democratic opponents in November, aside from Kelly who declined to comment, criticized both the reaction and the rallies.

“Ron DeSantis is traveling the country campaigning for 2020 election deniers,” tweeted Charlie Crist, a former Florida governor seeking the Democratic nomination to run against DeSantis. “He’s running for president by mobilizing the same people who tried to overthrow our democracy.”

Secretary of State and Democratic nominee for Governor Katie Hobbs, who Lake has called on to resign as she runs for governor, said in a statement, “Far from putting ‘America First,’ Kari’s repeated calls to defund law enforcement and her talk of secession are dangerous and belong nowhere near our state’s highest office.”

Lake and Masters joined Trump for a July rally in Prescott Valley, historically the most Republican county in Arizona, ahead of the state offering Trump his most successful primary night of the season.

ABC News’ Miles Cohen and Will McDuffie contributed to this report.