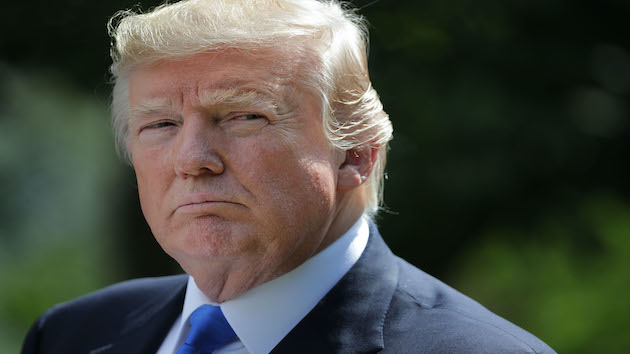 The emails to Jeffrey Rosen, from Trump’s former assistant — with the subject line “From POTUS” — purport to show manipulation of voting machines in Michigan.

Documents forwarded to Rosen allege election fraud in Antrim County, Michigan – claims that turned out to be false.

The emails were sent on Dec. 14, the day Trump announced Bill Barr would be stepping down as attorney general and as Electoral College votes were being counted.

Barr concluded in December before he left that there was no evidence of widespread voter fraud.

“To date, we have not seen fraud on a scale that could have effected a different outcome in the election,” Barr told the Associated Press.

Trump’s assistant also forwarded from Trump, to Richard Donoghue, then-acting deputy attorney general, a draft lawsuit, to be filed by the Justice Department, alleging voter fraud. Donoghue forwarded the draft lawsuit to U.S. attorneys in the Western and Eastern District of Michigan.

A lawsuit was never filed.

In a Dec. 30 email to Rosen released by the Democratic-controlled committee, then-White House chief of staff Mark Meadows asks Rosen, “Can you have your team look into these allegations of wrongdoing. Only the alleged voter fraud,” he wrote.

Another theory Meadows peddled to Rosen, in a Jan. 1 email with a link to YouTube video, was an allegation the committee said came from a former intelligence officer that people in Italy had somehow used satellites to manipulate votes in the election.

Rosen, in an email to acting Attorney General Donoghue, said he was asked to meet with one of Rudy Giuliani’s associates, Brad Johnson.

“After this message, I was asked to have the FBI meet with Brad Johnson, and I responded that Johnson could call or walk into the FBI’s Washington Field Office with any evidence he purports to have,” Rosen writes. “On a follow up call, I learned that Johnson is working with Rudy Giuliani who regarded my comments as ‘an insult.’ Asked if I would reconsidered, I flatly refused, said I would not be giving any special treatment to Giuliani or any of his ‘witnesses,’ and re-affirming yet again that I will not talk to Giuliani about any of this.”

Donahue responded in an email that the theory Meadow wanted investigated was “pure insanity.”

“Can you believe this?” Rosen writes in a message forwarded to Donoghue.

The U.S. Supreme Court in December had officially put to rest the 11th-hour attempt by Texas and Trump’s Republican allies Trump to throw out millions of votes in four states and overturn Democrat Joe Biden’s victory.

In an unsigned, single-page order, the court rejected the lawsuit, citing a lack of standing under Article III of the Constitution. In dismissing the case, the Supreme Court said Texas had no “cognizable interest” in how Pennsylvania, Michigan, Wisconsin and Georgia conduct their own elections.

“Attached is a draft complaint to be brought by the United States modeled after the Texas action,” the email says. “As I said on our call, the President of the United States has seen this complaint, and he directed me last night to brief AG Rosen in person today to discuss bringing this action.”

In May, Rosen testified in front of the House Oversight Committee that during his tenure in the Department no action was taken regarding the 2020 election.

“During my tenure, no special prosecutors were appointed, whether for election fraud or otherwise; no public statements were made questioning the election; no letters were sent to State officials seeking to overturn the election results; no DOJ court actions or filings were submitted seeking to overturn election results, and the only time DOJ did file a brief it was to seek a dismissal of Representative Gohmert’s lawsuit aiming to decertify the electoral count—and that lawsuit was dismissed, as DOJ had urged,” he said.