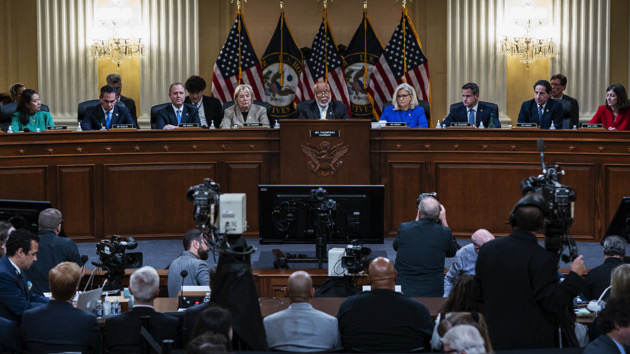 (WASHINGTON) — The Jan. 6 committee announced Monday morning that, due to a family emergency, its key witness, Bill Stepien — Trump’s 2020 campaign manager — is unable to testify as planned.

The committee said his counsel had confirmed that Stepien’s wife had gone into labor.

The hearing was delayed 45 minutes after the previously announced 10:00 a.m. start time.

Stepien was scheduled to testify in a hearing that will focus on Trump’s decision to declare victory against Joe Biden on election night and knowledge that he was spreading lies of widespread election fraud.

He was to appear before the committee on a panel with Chris Stirewalt, the former Fox News political editor who was fired after defending the network’s early projection that Trump had lost Arizona on election night — a move that infuriated the former president.

A second panel of witnesses in the roughly two-hour hearing will include Al Schmidt, a former Republican city commissioner in Philadelphia who repeatedly debunked claims of fraud in the state; veteran GOP election lawyer Ben Ginsburg, and Byung “BJay” Pak, a former U.S. Attorney for the Northern District of Georgia.

Pak previously told Senate investigators he resigned in January 2021 after learning Trump sought to fire him over not doing more to amplify his false claims of widespread election fraud in Georgia.

In a Los Angeles Times op-ed after the Capitol riot, Stirewalt, who was fired from Fox News on Jan. 19, 2021, wrote that after the Arizona call, he “became a target of murderous rage from consumers who were furious at not having their views confirmed.”

On a briefing call with reporters Sunday evening, select committee aides said Monday’s hearing will explore Trump and his campaign’s actions in the days and weeks after election night, and the decision to push “the Big Lie to millions of supporters” and fundraise off claims that rioters later used to justify attacking the Capitol on Jan. 6.

The questioning of live witnesses, along with clips of interviews the committee videotaped with other key witnesses, will show how Trump was told he had lost the election and lacked evidence of widespread voter fraud as he continued to claim the election was stolen from him, aides said.

“I think we can prove to any reasonable, open-minded person that Donald Trump absolutely knew, because he was surrounded by lawyers, including the attorney general of the United States, William Barr, telling him in no uncertain terms, in terms that Donald Trump could understand, this is B.S.,” Rep. Jamie Raskin, D-Maryland, said Sunday on CNN.

The committee hearing, which will be guided in part by Rep. Zoe Lofgren, D-California, will show “how litigation to challenge elections usually works,” and argue that Trump had an “obligation” to “abide by the rule of law” when his dozens of lawsuits failed in courts across the country.

Using never-before-seen video of the Capitol assault and testimony from Barr and Trump’s own daughter, Ivanka, the committee laid out the broad findings of its inquiry, placing Trump at the center of an “attempted coup” last year.

Hearings scheduled for Wednesday and Thursday will explore Trump’s efforts to pressure the Justice Department to investigate and spread false claims of widespread election fraud, and force Vice President Mike Pence to block the counting of electoral votes on Jan. 6.