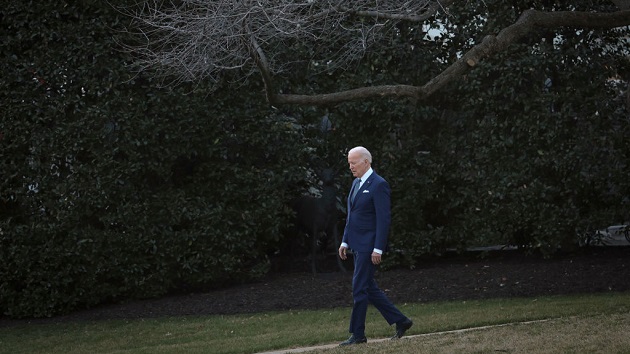 (WASHINGTON) — Calls mounted Monday for the U.S. to ban the import of Russian oil, but while President Joe Biden’s administration signaled a new openness to doing so, the president faced the tough decision of taking a step that would raise the price Americans pay at the gas pump.

Top Republicans and Democrats in Congress announced they had come to a deal on bipartisan legislation that would punish Russia for its invasion of Ukraine, by banning the import of Russian oil and other energy products — as well as suspending normal trade relations with Russia.

The White House said Biden had not yet decided whether to impose a ban. But an official with the White House’s National Security Council told ABC News that the Biden administration was considering doing so even if Europe did not also impose a ban — which would mark a departure from Biden’s strategy of imposing sanctions in lockstep with European nations.

Secretary of State Antony Blinken said Sunday that he had spoken with Biden and other Cabinet members the day before about a potential U.S. ban.

“We are now talking to our European partners and allies to look in a coordinated way at the prospect of banning the import of Russian oil, while making sure that there is a still an appropriate supply of oil on world markets,” he said during an interview with CNN’s “State of the Union.”

“That’s a very active discussion as we speak,” Blinken added.

In Congress, Democrats and Republicans in both houses have in recent days increasingly called for a ban. A bipartisan group of senators last week proposed legislation that would impose a ban, and House Speaker Nancy Pelosi, too, said she supported the move.

As the pressure to act mounts from both sides of the aisle, Biden faces a political quandary.

After nearly two weeks of placing crushing sanctions on Russia in concert with Western allies, not moving to ban Russian oil imports, too, could appear as it he is not doing all he can to inflict pain on Russia’s economy and its president, Vladimir Putin.

But around 7% to 10% of U.S. oil imports come from Russia, and a ban would raise energy prices, including the cost of gas, analysts say.

The White House has cited that cost to Americans as a reason Biden has not taken that step. It has been looking for alternative

White House officials also say the impact on Russia, which sent just 1% of its oil exports to the U.S. in 2020, would not be great — especially when its oil and gas sector is already under “de facto sanctioned” because of harsh restrictions on Russian banks.

But in an NPR/PBS NewsHour/Marist poll last week, 69% of Americans said they supported economic sanctions on Russia even if they resulted in higher energy prices in the U.S.

Biden has also said a priority of his is to keep the West united in imposing penalties on Russia for its invasion.

There is less appetite in Europe for a ban on Russian oil and gas imports, since European nations rely heavily on Russia for their energy needs — nearly half of Russian oil exports go to Europe, according to U.S. government figures – and a ban would raise Europe’s energy prices significantly, according to analysts.

The Democratic chairmen of the Senate and House tax-writing committees and the most senior Republicans on those committees said Tuesday that they had come to an agreement on legislation that would not just ban the import of Russian energy products but that would also suspend normal trade relations with Russia and Belarus, which has aided Russia in its invasion of Ukraine.

The legislation would also provide Biden with the authority to increase tariffs on products from Russia and Belarus and aim to suspend Russia’s participation with the World Trade Organization.

The House could vote on the legislation as soon as Tuesday or Wednesday.