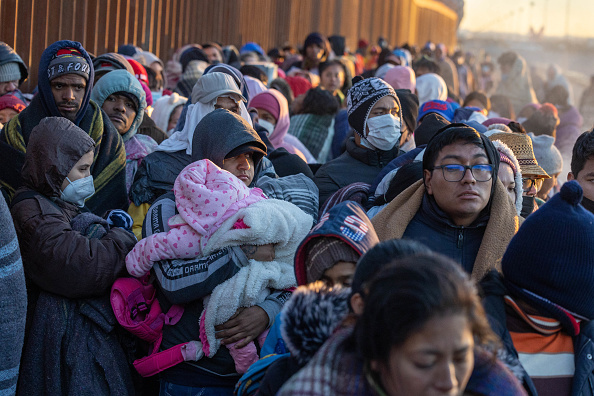 (WASHINGTON) — Authorities at the southern border have been arresting, detaining and removing migrants at the border more times in the past year than ever before in U.S. history.

Much of that work has been done under the Title 42 public health order, implemented in the early days of COVID-19, which allows for the rapid expulsion of migrants without opportunities to apply for asylum.

While Republicans have insisted Title 42 should remain in place as a means of handling the record numbers, mounting evidence indicates the protocols actually contribute to that very issue.

Over the past several years, a groundswell of migration has built up throughout Central and South America with many people waiting for the end of pandemic-era restrictions like Title 42.

Legal battles between mostly GOP-led states, the federal government and civil liberties advocates have delayed the end of Title 42. Changing demographics of those seeking to cross — with more coming from countries that do not accept U.S. migrant removal flights — have also limited the effectiveness of Title 42.

ABC contributor John Cohen served as the head of intelligence at the Department of Homeland Security as the Biden administration was preparing its plan earlier this year for the end of Title 42. At the time, Cohen said, the department estimated there were 4 to 6 million people migrating throughout Central and South America.

Based on the latest Customs and Border Protection (CBP) data, only a fraction of those have attempted to cross into the U.S. so far.

“Over the course of the last four years, this population of people seeking to come to the United States has formed south of the border and they are going to come right whether Title 42 remains in place or not,” Cohen said.

Republicans and federal law enforcement officials alike, however, have warned of a massive increase in migration upon the lifting of the Title 42 order, which could strain — and potentially exhaust — the Border Patrol and the communities where migrants choose to settle.

The elimination of the hardline measure, they say, would invite unprecedented numbers of people to seek refuge in the U.S. regardless of the validity of their claims.

However, a rare in-depth look at Border Patrol data reveals evidence that the end of Title 42 could in fact reduce border crossings long-term and ease the burden on the immigration system while allowing migrants to make legally authorized humanitarian claims.

CBP measures unauthorized migration at the southern border with a monthly tally of encounters, which includes arrests made by Border Patrol and people who voluntarily give themselves up to immigration authorities. These records represent interactions CBP officials have with migrants. Under Title 42, there have been more than ever before in U.S. history.

The numbers of encounters are often misconstrued as a record of individual migrants. But the tally of encounters doesn’t account for migrants who illegally cross multiple times — one person could be counted as multiple encounters. And since Title 42 is not an immigration policy, there are no legal consequences for getting expelled, unlike for those processed under long-standing U.S. immigration law.

Nearly half of all people processed under Title 42 in budget year 2021 – the first full year the policy was in effect — had previously tried to cross into the U.S., according to Border Patrol data obtained by ABC News.

By comparison, those processed under Title 8, the standard immigration authority which has consequences for repeat offenses, had a recidivist rate of just 3%.

The disproportionate amount of recidivism appears to have continued into this year, when 44% of those processed under Title 42 had a prior crossing attempt on record, according to the latest available data reviewed by ABC News. However, the number of migrants who were arrested and turned themselves in was significantly higher, at 914,588 in budget year 2021, compared to pre-pandemic years when that number topped out at 608,000, according to Border Patrol numbers.

Now contending with a war in Ukraine, concerns about crime and instability in Latin America that continues to drive people north, the Biden administration has run into a resource crunch with little wiggle room to handle the growing diaspora arriving in the southwest, observers said.

“It is a massive problem that requires a comprehensive approach involving federal, state, local governments and non-government entities,” Cohen said. “And the challenge is that it’s such a politically polarized issue.”

While a viable solution from the White House and Congress hasn’t materialized — given the policy divisions — the Department of Homeland Security has been working on overdrive to process the record number of those apprehended along the southwest this past year. During budget year 2022, DHS deported or expelled 1.4 million migrants under both Title 42 and the primary immigration process of Title 8.

Thousands of new staff, nearly a dozen new semi-permanent facilities, a doubling of transportation capacity and a request for Congress to provide additional security funding are all components of the department’s multi-pronged approach to handle a historic level of migration.

CBP can comfortably handle around 3,500 unauthorized migrant encounters per day, one current and one former official told ABC News. But the El Paso region alone saw more than two-thirds that rate in the recent surge that began earlier this month.

The strain on authorities and humanitarian aid workers was apparent. A video released by Texas Rep. Tony Gonzales showed an overcrowded processing facility where migrants were huddled with mylar blankets side by side on the floor.

CBP countered the migration by transferring people out of the area while bringing in staff from less impacted regions. Overall, nearly 10,000 migrants were moved out of the El Paso area in a matter of days, including roughly 3,400 who were deported or expelled.

The situation in El Paso has been extreme, especially for local officials who continue to struggle with providing aid to those who remain in the city. But the El Paso Border Patrol sector is just one part of a nearly 2,000-mile stretch that will serve as the destination for many who are part of current intercontinental migration trends across Central and South America.

Migration patterns have been changing, creating added challenges in the efforts to deport those who do not qualify for humanitarian protection. In fiscal year 2022, for the first time in history, U.S. authorities saw more unauthorized crossings by people from Cuba, Nicaragua and Venezuela than from El Salvador, Guatemala and Honduras.

Two-decade inflation highs in Columbia and Peru, where more than 3.5 million Venezuelans live, contributed to their migration, according to the Migration Policy Institute, a think tank. Disputed elections in Nicaragua and the targeting of political candidates drove people out of that country and across Central America, MPI said in a recent report.

“There is just this huge number of people — displaced people — who are in this region,” Cohen said. “So it’s not just a U.S. issue. While they may want to come to the U.S., it’s an issue that’s going to impact other countries, particularly Mexico, and Central American countries and so they need to be a part of the solution as well.”

And that’s where Title 42 has shortcomings, too. Even if a home country agrees to accept the swift return of their citizens from the U.S., many have already been displaced elsewhere in Central and South America for years.

These populations are often prime targets for smugglers who make false promises and exploit those in vulnerable situations. Collaborations between Homeland Security, the Justice Department and international partners have resulted in more than 6,500 arrests related to human smuggling, government officials said.

HSI, a division of Immigration and Customs Enforcement (ICE), is the country’s principal agency for tracking down smugglers and helping those who find themselves in the throes of illicit operations run by transnational criminal organizations with immense resources. The government believes the stakes have never been higher for ICE HSI as the Biden administration attempts to reign in illegal migration across the southwest while protecting victims fleeing persecution.

The scope and sophistication of smuggling operations has ramped up exponentially in recent years. Fifteen to 20 years ago, it was common to find family-operated smuggling rings charging $2,000-3,000 per migrant, Larrabee said. But now, much larger organizations are charging upwards of $8,000.

“That’s a huge amount of money,” Larrabee said. “Now, that money is spread out among many different people in the organization — but those numbers continue to go up depending on where you’re coming from too.”

The organizations that run human smuggling rings operate across borders and are tied to criminal groups that can freely move through Mexican border towns, Larrabee said. In areas where the U.S.-Mexico border is impossible to block with a physical barrier — including the middle of the Rio Grande — migrants are able to attempt dangerous repeat crossings when they are sent back under Title 42.

The same conditions that allow smugglers to operate freely along the Mexican side also expose migrants to extortion, assault and sexual abuse, according to government officials.

The State Department urges people to avoid or reconsider travel to most of the Mexican border region and human rights groups have for years documented exceptionally high rates of violence with migrants as the targets.