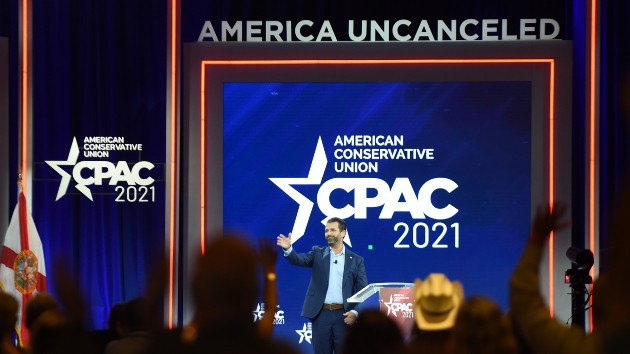 Officially beginning Thursday evening, this year’s conference comes about a year into the coronavirus pandemic. Normally held in Maryland, Matt Schlapp, the chairman of the American Conservative Union, took a jab at the state’s Republican governor, Larry Hogan, for telling the organization they could not hold CPAC there in 2021.

Throughout the day, speakers referenced the pandemic by decrying the restrictions officials put in place. Only about an hour into Friday’s programming, attendees had to be reminded to keep their masks on.

The year’s event also comes as the Republican Party grapples with its identity.

One faction of the party doesn’t want Trump at the helm following the Jan. 6 insurrection when Trump-supporting rioters stormed the U.S. Capitol in an attempt to stop Congress from counting electoral votes certifying President Joe Biden’s victory, which Trump relentlessly decried as illegitimate despite all evidence to the contrary.

But that segment of the party was notably absent from CPAC, which is considered a barometer of the Republican Party’s base. The theme of CPAC 2021 is “America Uncanceled,” but the pre-Trump GOP and establishment Republicans seemed to be “canceled” from the conference altogether.

CPAC’s speakers were staunchly behind Trump and the new Republican Party that emerged throughout his four-year tenure, and took direct swipes at the “establishment” wing of the party and Republicans who have come out against Trump.

Republican John Boehner was the speaker of the House for four years, but at CPAC, Cruz joked that he didn’t know who he was. The quip comes after reports that Boehner, in the audio version of his memoir, tells Cruz to “go f— yourself.”

In between the shots aimed at the “radical left” or the Democratic Party as a whole, some seemed more focused on targeting their own Republican colleagues.

“If Liz Cheney were on this stage today. She’d get booed off of it. What does that say? The leadership of our party is not found in Washington D.C.,” said Florida Rep. Matt Gaetz, jabbing at the GOP’s conference chair, who voted to impeach Trump.

“She hates Donald Trump and his policies … because she’s tied to an establishment that has done nothing but fail us time and time again,” he said.

Florida Sen. Rick Scott, who is charged with leading the party’s efforts to retake the Senate majority as chair of the National Republican Senatorial Committee, acknowledged “all the infighting in the Republican Party,” but adamantly said he wouldn’t intervene.

“Many people are saying that my job is to mediate between warring factions on the right, and mediate the war of words between the party leaders,” Scott said. “I’ve got some news for you, I’m not going to mediate anything, instead I’m going to fight for our conservative values.”

He also made clear that the GOP is very much still Trump’s party.

“We will not win the future by trying to go back to where the Republican Party used to be. If we do, we will lose the working base that President Trump so animated,” Scott said. “We’re gonna lose elections across the country and ultimately we’re gonna lose our nation.”

During the second impeachment trial, the core of the House impeachment managers’ case was this: Trump’s extreme rhetoric about the presidential election being “rigged” incited a mob to storm the U.S. Capitol.

Every Democratic senator and seven Republican senators bought the argument, voting to convict Trump. In both the House and Senate, even Republicans who did not vote to impeach or convict Trump, respectively, criticized his rhetoric and actions surrounding the election.

But at CPAC, while there were few mentions of Jan. 6, several speakers’ rhetoric was similarly inflammatory as they described political opponents in extreme terms and painted a dire picture of a nation led by Democrats.

During his speech, freshman Rep. Madison Cawthorn, R-N.C., delivered a line eerily similar to one Trump gave on Jan. 6, when the former president said, “If you don’t fight like hell, you’re not going to have a country anymore.”

“If we sit on the sidelines, we will not have a country to inherit. If we do not get involved and say that it is our duty to make sure that our country is responsible, that our country doesn’t take away our liberties, then my friends, we will lose this nation,” Cawthorn said. “The Democrats, my opponents and adversaries on the other side are brutal and vicious and they are trying to take away all of our rights.”

Sen. Tom Cotton of Arkansas said that “radical liberals … want to erase and rewrite our history.”

“There’s no more urgent task today than the defense of America, and a simple unapologetic patriotism. We face many threats in this country, whether from China or Iran or Islamic terrorism, but there is no more pernicious threat to America than the rejection of our founding principles and our heritage and our tradition,” Cotton said. “And all those on the left, who would reject those things I have a message: We will defend America without fear, without reservation and without apology.”

While it was likely not meant to be a reference to Jan. 6, Cruz said that the Washington elites “look at the millions of people inspired who went to battle fighting alongside President Trump, and they’re terrified.”

The Texas senator also mocked Rep. Alexandria Ocasio-Cortez, declaring, “AOC is telling us she was murdered!”

It was a clear reference to the New York congresswoman recounting on Instagram Live her experience on Capitol Hill the day of the insurrection. Ocasio-Cortez was not in the House chambers that day, but was hiding in her office in another building on the Capitol complex. Divulging that she’s a sexual assault survivor, she spoke at length of the trauma and fear for her life that she felt on Jan. 6 when someone was banging on her office door, not knowing that the individual was a Capitol Police officer.

The next presidential election is three years away, but the conservative confab afforded some of the potential 2024 presidential hopefuls an opportunity to position themselves as a possible leader of a post-Trump Republican Party.

Missouri Sen. Josh Hawley, who is speculated to be eyeing a run for the White House, sought to cast himself as a fighter against those who have tried to “cancel me, censor me, expel me, shut me down, stop me from representing” voters in Missouri.

Hawley, who played a prominent role in objecting to the Electoral College results in Congress, received a standing ovation for referencing his opposition.

“I objected during the Electoral College certification, maybe you heard about it. I did,” he said. “I said I want to have a debate on election integrity, and what was the result of that? You know what the result was, I was called a traitor. I was called a seditionist, the radical left that I should be resigned and if I wouldn’t resign, I should be expelled from the United States Senate. Well, as I said a moment ago, I’m not going anywhere.”

Cruz took the stage to double down on Trump’s legacy, contending that the party Trump reshaped in his image is here to stay.

But looming over Friday’s speeches was the former president, who is still toying with a possible 2024 bid. He is set to take the stage on Sunday and reclaim the mantle that doesn’t appear too far away.

The former president’s eldest son even predicted that Trump’s speech Sunday “will solidify Donald Trump and … the MAGA movement as the future of the Republican Party.”