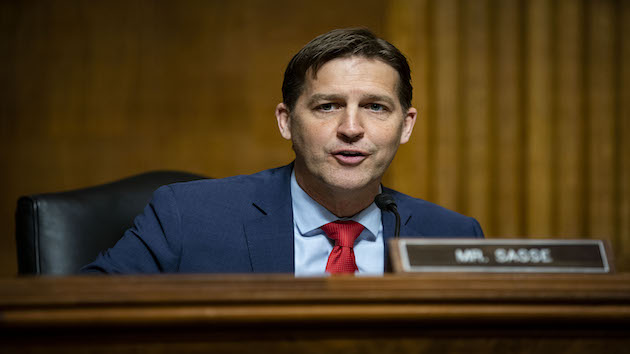 “There is clearly no plan. There has been no plan. Their plan has basically been happy talk,” Sasse told ABC “This Week” co-anchor Martha Raddatz.

In an earlier interview with Secretary of State Antony Blinken, Raddatz pressed the secretary about the United States’ ability to get the remaining U.S. citizens and Afghan allies out of the country once all U.S. troops where out of Afghanistan.

Blinken pointed to private and public assurances from Taliban leadership to allow free travel after America’s departure to anyone who wishes to leave the country. Sasse called the interview “disgusting” and he said the thinking that the U.S. should trust the Taliban is “stupid” and “insane.”

“And their plan still seems to be, ‘let’s rely on the Taliban’ because the Taliban cares a lot about what world opinion thinks of them — it was a disgusting revelation of yet again no plan,” Sasse added.

The senator, who serves on the Senate Intelligence Committee, has been critical of the U.S. troop withdrawal from Afghanistan since the final months of the Trump administration.

“I fear this weak retreat is not grounded in reality and will make the world a more dangerous place,” Sasse said in a statement in November 2020.

In the last few days, Sasse has repeatedly urged Biden to keep troops in Afghanistan past Tuesday’s deadline to ensure that every U.S citizen and ally who wants to leave the country is safely evacuated.

Raddatz asked the senator Sunday what he thinks should be done to continue evacuations.

“There are some small ways to try to do things around the margins. But what we need is a commander in chief that actually has a big plan and a big way to solve this problem,” Sasse responded, accusing Biden of being “disconnected from reality.”

Sasse continued to hammer the “happy talk” he claimed is being used by Biden and that he said won’t resolve the growing terror threat in Afghanistan.

“The consequences are going to be a return of the Taliban that has been willing to provide safe haven to terrorists in the past,” Sasse added. “We have so many different groups who want to turn Afghanistan into the global capital city of jihad, and the administration doesn’t have a plan.”

Raddatz asked Sasse whether his plea to keep more U.S. forces in Afghanistan past the Tuesday deadline would put them at risk.

“Given that the Taliban said this date was a red line, given that ISIS is now carrying out these horrendous bombings and threatening more violence, wouldn’t staying have put our forces more at risk?” Raddatz asked.

“Joe Biden put our forces at risk by having no plan for how to evacuate. We are absolutely at risk,” Sasse responded.

“Abandoning Bagram base will be read about in military textbooks for decades as one of the stupidest military blunders ever,” Sasse continued, adding that the rapid reduction of U.S. forces in Afghanistan has left a “ridiculously untenable position” for evacuations.

“Thirteen servicemen and women died this week, and our families across this country are in prayer for those families and for the ultimate sacrifice they have made, but they were doing something to make sure that no one was left behind,” Sasse said.