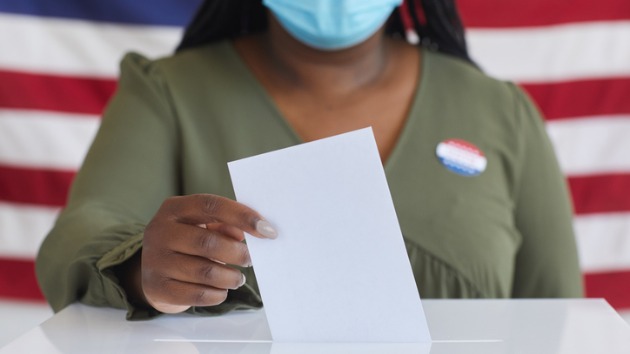 (WASHINGTON) — Partisan divides were on full display Tuesday morning as the Senate Judiciary Committee discussed a wave of restrictive voting legislation introduced in statehouses across the country and federal legislation that would standardize voting laws.

Republicans across 47 states have introduced 361 voting-related bills in their legislative sessions this year with the premise of restoring confidence in elections — setting off outrage from Democrats and advocacy groups who are dubbing the trend “The New Jim Crow.” The title of Tuesday’s hearing was “Jim Crow 2021: The Latest Assault on the Right to Vote.”

Debate centered around the voting laws in various stages in state legislatures as well as the Democratic-led “For the People Act,” which would put in place federal regulations on running elections, including expanded access to absentee voting and mandates around early voting periods, which states would be required to follow.

Republicans pushed back on the idea of federal interference in state-run elections, while Democrats argued the necessity of a federal law in light of conservatives in statehouses across the country, including in Georgia, pursuing changes as to how voters can cast their ballots and who is permitted to vote absentee.

California Sen. Alex Padilla pointed to the history of Jim Crow-era tactics that kept minority voters away from the polls.

“Voter suppression is rooted in white supremacy. During the Jim Crow era, we know that racially-targeted, racially-motivated voter suppression was often blatant. Legislatures adopted overtly racist policies like literacy tests and poll taxes in an effort to shape the electorate,” Padilla, a Democrat, said.

“Today’s voter suppression playbook is still rooted in white supremacy and motivated by the same factors as their Jim Crow predecessors but looks different. Overtly racist policies have been replaced by facially neutral ones, like mandated in-person voting requirements, decommissioning of polling sites and manipulated, discriminatory photo ID laws…”

A recent Quinnipiac poll found the nation is split on whether voter fraud or voter suppression is the bigger problem in the country, 43% to 49%, respectively. Fifty-four percent of respondents say they’d like to keep in place the expanded voting access in 2020 due to the coronavirus. But baseless fears of voter fraud — perpetuated by former President Donald Trump and others — still exist despite assurances made top Trump administration officials, including former Attorney General Bill Barr, and top Republicans across the country that there were no signs of widespread voter fraud in the 2020 election.

“I can’t help but wonder why, after the Trump administration top elections security official and Georgia’s own election officials vouched for the integrity of the last elections, did seemingly every Republican-controlled legislative body in the country… file and move voter suppression bills,” Sen. Sheldon Whitehouse, D-R.I., said.

“The lie of massive, rampant voter fraud is serving the same function today as it did during the rise of Jim Crow,” Sherrilyn Ifill, the president and director-counsel of the NAACP Legal Defense Fund, said. “It stokes fear in a segment of the population that democracy is in peril, and thus provides cover for laws that target Black voters with race-neutral language in the 21st century.”

One of the most restrictive elections bills this year has come out of Georgia, a target of Trump’s in the aftermath of the 2020 election. After the state turned blue with the election of President Joe Biden and the flipping of two Senate seats, Republicans pushed and passed SB 202 — a massive omnibus voting bill that set new guidelines for early, in-person voting and gave the General Assembly greater control over election administration, among other provisions.

While some Republicans argue that voters’ faith in the system needed to be restored, many Democrats contended Tuesday that Republicans are changing the law in Georgia and other states to solidify wins in subsequent contests — and that they are targeting Black voters in particular to make that happen. The response to that, they say, is federal legislation.

“If we had not acted in 1965, what would our country look like?” said Sen. Raphael Warnock, D-Ga., who gave testimony at the hearing, referring to the Voting Rights Act of 1965. “Surely I would not be sitting here, only the 11th Black senator in the history of our country, and the first Black senator in Georgia.”

“And maybe that is the point,” he added.

Republicans said that the point of new legislation is not to disenfranchise Black people and that federal legislation would usurp state’s rights.

“Nowhere in the Constitution does it empower the federal government to completely usurp the role of the states in holding elections,” Sen. John Cornyn, R-Texas, said. “Yet through H.R. 1, Congress is not acting as a check, it’s acting like a hijacker to take over the constitutional authority from the states, and acting as a sole arbiter in how an election is running in rural Vermont, or downtown Chicago.”

Sen. Chuck Grassley, the top Republican on the committee, called the title of the hearing “offensive.”

“At a time when voters on both sides of the aisle have doubts about the integrity of our elections, polarizing rhetoric that distorts history is not helpful,” he said.

Still, the hearing kept returning to the question of whether “Jim Crow” is at work in new voter legislation in states across the country.

“Let me concede at the outset that Jim Crow at its worst was more violent than the situation we face today,” Judiciary Chairman Dick Durbin, D-Ill., said Tuesday.

“But I think the bottom-line question which we are addressing in this hearing is whether there is a design or an intent in legislation that is being considered and passed in many states, including the state of Georgia, to limit or restrict the right to vote of minority populations, with the intent of having an influence on the outcome of the election,” he added.

Former state House Democratic leader and voting rights advocate Stacey Abrams said that, in fact, is the intent of the Georgia law.