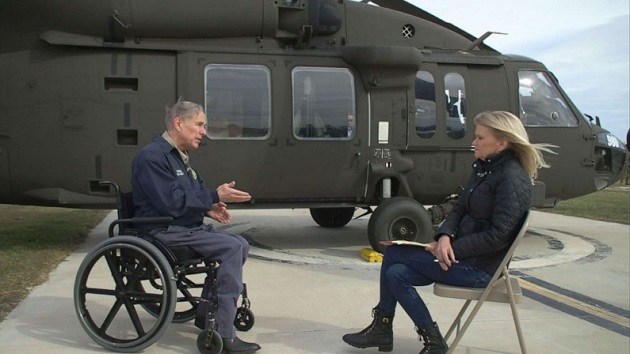 (EL PASO, Texas) — With Title 42 expected to be lifted in a matter of days, Texas Gov. Greg Abbott said he anticipates catastrophe at the southern border.

“If the courts do not intervene and put a halt to the removal of Title 42, it’s gonna be total chaos,” Abbott told ABC’s “This Week” co-anchor Martha Raddatz.

Texas is part of a coalition of Republican-leaning states that has pushed to keep Title 42 in place despite the Biden administration and civil liberties advocates saying it’s time for the hardline policy to end.

A federal appeals court on Friday denied the GOP states’ effort, putting the administration on track to lift the COVID-19 pandemic-related immigration restrictions on Wednesday.

Though that date could change if the Supreme Court decides to intervene. The GOP states are planning to file an appeal to the nation’s highest court on Monday, Arizona Attorney General Mark Brnovich, one of the Republican officials seeking to keep Title 42 in effect, confirmed to ABC News.

Title 42, put into place by the Trump administration, has been used since the early weeks of the global health crisis to expeditiously expel most migrants and asylum-seekers from the southern border. The Biden administration first sought to end the policy in May, pointing to improving pandemic conditions.

Raddatz pressed Abbott on how to justify keeping Title 42 in place when it is a public health order, not official immigration policy.

“Whether it’s COVID or some other issue, when you have people coming in from across the globe, without knowing at all what their health status is, that almost by definition is a public health risk,” Abbott responded. “There’s every reason to keep that in place.”

But immigration advocates and those fighting to repeal Title 42 have questioned the GOP states’ motive for wanting to keep the policy in place.

“They have been fighting to end COVID restrictions everywhere since the beginning. And now all of a sudden, they want a public health restriction solely when it comes to asylum-seekers. I think the real game here is that they’re trying to close the border,” said Lee Gelernt, the lead attorney for the American Civil Liberties Union’s challenge to Title 42, in a statement.

Abbott in particular has taken a tough approach to border security. He launched “Operation Lone Star” to crack down on crossings, and has bused more than 14,500 migrants from his state to Washington D.C., Philadelphia, New York and other Democrat-led cities.

“The very reason behind this is because communities like Del Rio and Eagle Pass and others, they were having thousands of people dumped off into their communities … and they don’t have the capability of dealing with that vast number of migrants,” he said. “I removed them to locations that self-identified as sanctuary cities that have the capability and the desire to help out these migrants. And so that’s exactly what’s taking place.”

Economic and political crises in Cuba, Haiti, Nicaragua and Venezuela and other nations have fueled record migration to the U.S.

“Do you look at them and think, you know, some of those people really do deserve to be here?” Raddatz asked.

A surge of migrants is expected at the southern border once Title 42 is lifted, adding to the influx of migrants border communities like El Paso are already experiencing with the policy still in place.

The Biden administration insists they’ve been preparing for the end of Title 42, pointing to the hiring of more Border Patrol staff and contractors. Biden officials are also pushing back on claims from Abbott and other Republican officials that the end of Title 42 equates to an open border.

“I don’t think I’ve ever heard President Biden say, ‘We have an open border, come on over,"” Raddatz said. “The people I have heard say it are you, are former President Trump, are Ron DeSantis. That message reverberates in Mexico and beyond. So they do get the message that it is an open border and smugglers use all those kinds of statements.”

Abbott argued that malicious actors have seized on Biden’s border policies since he became president.

“It was known from the time that Joe Biden got elected that Joe Biden supported open borders,” Abbott said. “It is known by the cartels, they have sophisticated information. Whether or not the Biden administration is going to enforce the immigration laws or not is known across the world but most importantly, known among the cartels.”