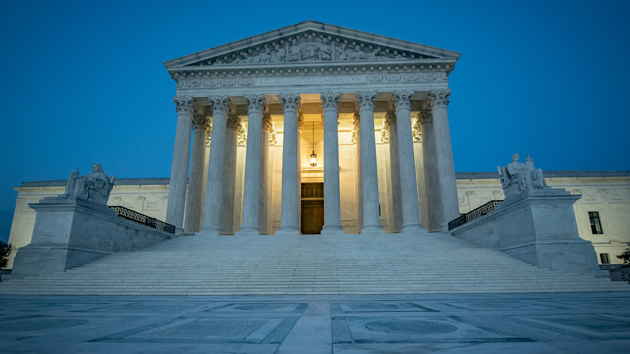 (WASHINGTON) — The Supreme Court could decide as soon as Tuesday evening whether Texas can move forward with a controversial ban on most abortions after 6 weeks of pregnancy that’s set to take effect on Sept. 1.

The law, Senate Bill 8, which would be among the strictest in the nation, also authorizes private citizens to sue anyone who helps a woman obtain abortion services and in turn receive at least $10,000 in damages per instance.

Abortion providers on Monday appealed to the court for an immediate emergency injunction blocking the law while legal challenges continue. They claim the Texas restrictions would “immediately and catastrophically” limit abortion access for 85% of patients and force many clinics to close across the state.

Justice Samuel Alito, who oversees matters coming out of federal courts for the 5th Circuit, which includes Texas, gave the state until 5 p.m. Tuesday to lay out its argument for rejecting the request. He could decide on his own or refer the matter to the full court for a vote.

“In less than two days, Texas politicians will have effectively overturned Roe v. Wade,” said Nancy Northup, president and CEO of the Center for Reproductive Rights, which is leading the challenges to Texas’ law.

“Patients will have to travel out of state – in the middle of a pandemic – to receive constitutionally guaranteed healthcare. And many will not have the means to do so. It’s cruel, unconscionable, and unlawful,” she said.

Attorneys for Texas have said the abortion providers lack legal standing to preemptively challenge the law since it has not yet taken effect or had any impact on their patients or services.

Texas is one of 13 states that have passed laws banning abortion in the first trimester of pregnancy; legal challenges have so far prevented all from taking effect.

S.B. 8 runs plainly counter to the Supreme Court’s precedent in 1973’s Roe v. Wade and affirmed in 1992’s Planned Parenthood v. Casey, which established that state restrictions on abortion before a fetus can be viable outside the womb are unconstitutional.

“SCOTUS really might be on the verge of functionally ending legal abortion in TX and hoping no one notices,” said ABC News legal analyst and Cardozo law professor Kate Shaw in a post on Twitter.

The court is set to reconsider its precedents later this fall in the biggest abortion rights case to come before the justices in years. The case, which is out of Mississippi, will determine whether all pre-viability abortion bans are unconstitutional or whether a new standard should be applied.