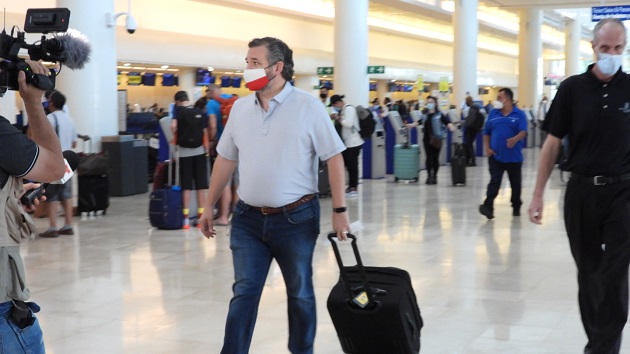 (HOUSTON) — Former Texas congressman Beto O’Rourke lashed out at Sen. Ted Cruz for flying to Mexico as the state suffered from power outages and freezing temperatures.

Cruz flew to Cancun on Wednesday and returned to the Lone Star State Thursday after he faced backlash when photos of him at the airport emerged on social media.

“It was a mistake,” Cruz told reporters outside his home Thursday evening, according to ABC affiliate KTRK.

O’Rourke, who has spent the last few days organizing wellness checks for seniors in the wake of this week’s Texas storm, slammed his Republican rival for leaving the state as swaths of the population went days without electricity or heat.

Speaking on MSNBC’s “Morning Joe” on Thursday, O’Rourke said Cruz “is vacationing in Cancun right now when people are literally freezing to death in the state that he was elected to represent and serve.”

On the “Inside the Hive” podcast, O’Rourke told the hosts, “I don’t know how much we were expecting from him to begin with. The people of Texas have really stepped up and make me really proud … that guy wants nothing to do with government, or at least our form of it.”

O’Rourke lost the race for a Texas Senate seat in 2018 to Cruz.

“I think you can be a father and be the senator of Texas all at the same time and make a round trip, quick drop-off, quick trip, and come home,” Hannity said on his show Thursday night.

Donald Trump Jr. showed his support for Cruz, tweeting that governors and senators differ “in terms of job description and what they can do for localized disasters.”

In a statement to ABC News, Cruz said he went to Mexico to take his daughters on a trip with their friends and to “be a good dad.”

After returning to Texas, he said, “I have to admit, I started having second thoughts almost the moment I sat down on the plane.”

He left Texas as the state was crippled by a powerful storm that started Sunday, leading to freezing temperatures and widespread power outages. Millions of Texans were under a boil water advisory.