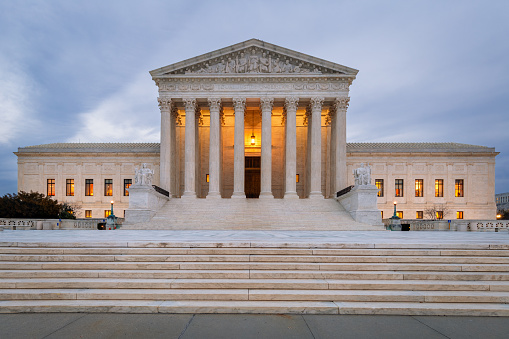 (WASHINGTON) — The U.S. Supreme Court’s conservative majority on Monday appeared sympathetic with a wedding website designer challenging Colorado’s anti-discrimination law and its requirement that she provide services for same-sex couples or face a fine. At the same time, the justices seemed wary about the ramifications of a broad ruling in her favor, suggesting a desire to potentially resolve the case on narrow grounds.

Lorie Smith, a Denver-based designer who is Christian, says the state’s public accommodations law — mandating that businesses serve all customers regardless of their sex, gender, race, ethnicity or sexual orientation — forces her as an artist to create messages that violate her beliefs. She has not yet turned away any customers, but says the law preemptively prevents her from joining a lucrative line of work.

Smith is “an individual who says she will sell and does sell to everyone, all manner of websites. But she won’t sell a website that requires her to express a view about marriage that she finds offensive to her religious beliefs,” Justice Neil Gorsuch said favorably of Smith.

“One can view these websites — or, last time around we had cakes — as either expressing the makers’ point of view or the couple’s point of view,” Gorsuch said, alluding to a related 2018 case involving cakes for same-sex weddings. “And that’s really at the heart of a lot of this.”

Justice Brett Kavanaugh said the case boils down to a simple question: “How do you characterize website designers? Are they more like the restaurants and the jewelers and the tailors, or are they more like, you know, the publishing houses and other free speech analogues?” The latter are given broad discretion under the First Amendment’s freedom of speech.

“They are creating speech,” Kristen Waggoner, Smith’s attorney said. “In those other examples, speech is not at issue.”

Colorado argued its law is neutrally applied to all public businesses and does not compel speech, instead simply requiring a business owner to offer the same goods and services to all customers, regardless of their status.

“Granting such a license to discriminate would empower all businesses that offer what they believe to be expressive services, from architects to photographers to consultants, to refuse service to customers because of their disability, sexual orientation, religion, or race,” Olson said. “This rule would allow another web design company to say no to interracial couples served.”

Olson explained that a Jewish deli could lawfully choose to only sell Jewish foods, or that a Muslim printer could only agree to print Quran verses, but that both would need to provide that same service to anyone who sought it, regardless of the customer’s identity. “If they offer a general service to the public, then they need to offer that regardless of the customer’s religion,” he said.

Sotomayor also questioned whether the act of creating a website for a customer can itself fairly be considered the protected speech of the designer.

“How is this your story? It’s their story,” Sotomayor said of a couple to be married.

Justice Ketanji Brown Jackson raised a hypothetical scenario of a mall Santa who sold artistic photos with children meant to be evocative of the 1940s and 50s — and would only appear with white children as a matter of belief.

“Their policy is that only white children can be photographed with Santa in this way, because that’s how they view the scenes with Santa that they’re trying to depict,” Jackson said. “Why isn’t your argument that they shouldn’t be able to do that? And maybe it is?”

“This court has protected vile, awful, reprehensible, violent speech in the past,” replied Waggoner, Smith’s attorney. “No one should be compelled to speak a message.”

Arguments in the case ran nearly double their scheduled length, stretching two and a half hours.

The Biden administration joined the debate on the side of Colorado, warning against a decision that would undermine the government’s compelling interest in rooting out discrimination nationwide. More than a dozen states have laws similar to Colorado’s Anti-Discrimination Act at issue in this case.

Deputy U.S. Solicitor General Brian Fletcher argued that the status of LGBTQ people and the nature of a same-sex marriage are intertwined, and that refusing to offer a wedding website to a same-sex couple is akin to turning away people for who they are.

“I do not mean to equate those who have different views about marriage to racists,” Fletcher said, but “the same principles apply in both cases.”

Several of the justices on both sides seemed eager to try to find common ground, presenting a flurry of hypothetical situations to test various proposals.

Chief Justice John Roberts questioned whether a web designer could simply affix a “tagline” stating his or her beliefs about marriage that would appear on all wedding websites sold.

Justice Elena Kagan, while broadly supportive of Colorado’s case, suggested some elements of an artists’ design might more clearly qualify for free speech protection than others. “A statement of opinion about the nature of this marriage,” she said, “I have difficulty with that hypothetical.”

Justice Jackson probed whether the court could draw a line between explicit and implicit speech, positing that a website designer might not have to write clear statements which violate a particular personal belief but that the mere act of making a website for a wedding would itself be a lesser-protected form of speech.

“This would be the first time in the court’s history, correct, that a business open to the public … serving the public, that it could refuse to serve a customer based on race, sex religion, or sexual orientation, correct?” Sotomayor asked, highlighting opponents’ view of the stakes.

A decision is expected by the end of June 2023.