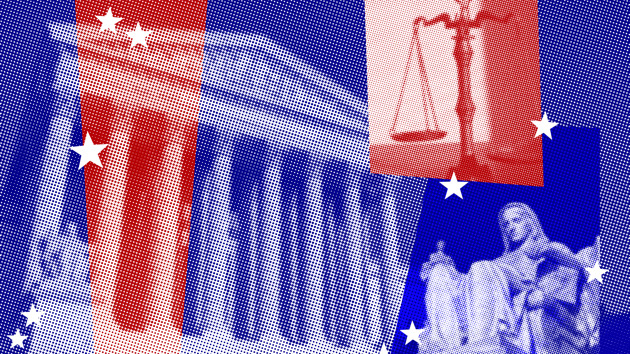 (WASHINGTON) — The Supreme Court on Monday will revisit the question of affirmative action in higher education.

Justices are hearing oral arguments in two major cases challenging race-conscious admissions programs at Harvard University and University of North Carolina. It’s the first test for affirmative action before the current court, which has a six-justice conservative majority and three justices of color, including the first-ever Black woman justice, Ketanji Brown Jackson.

The court’s decision, due out next year, could end the policy that’s shaped the college admissions process for the past half-century.

Justice Ketanji Brown Jackson, the court’s newest member, is questioning whether members of Students for Fair Admissions have standing to challenge the universities.

“I’ve been struggling to understand how race is actually factoring into the admissions process here and whether there’s actually any redressable injury that arises?” Jackson asked. “How exactly UNC’s system works with race and how your members are harmed by that?”

Strawbridge insisted that white students are at a disadvantage when applying to UNC because they cannot get a “plus” point based on their race.

“It does not give racial preferences to white applicants,” Strawbridge said.

“Any consideration or race will give rise to injury … You’re being denied the opportunity to compete on a fair playing field,” he added.

Oct 31, 10:27 AM EDT
Liberal justices press for facts on harm: How can you prove race is determinative?

The court’s three liberal justices are challenging Patrick Strawbridge, arguing the case for Students for Fair Admissions, to articulate the harm from schools using race as one factor in a holistic review, consistent with Supreme Court precedent on affirmative action.

“You’re considering race is the only factor that gets someone in at a school,” Justice Sonia Sotomayor pressed.

Strawbridge replied that “logic” suggests that if race is accounted for, only some people are going to get in.

Justice Ketanji Brown Jackson interjected, asking for “the facts that some people aren’t going to get in?”

Strawbridge replied that experts estimate 1-2% of applicants to University of North Carolina are affected by racial considerations. He said that translates to 700 applications.

“How can you ever prove that it’s ever a determinative factor?” Justice Sotomayor pressed.

He invoked the landmark decision in Brown v. Board of Education to mean “racial classifications don’t have a place” in education. Strawbridge said flatly the court should overrule 40 years of affirmative action precedent inconsistent with Brown and “egregiously wrong.”

It “contradicts the Constitution’s guarantee of equal treatment,” he said.

Two attorneys who have represented former President Donald Trump will make the case against affirmative action at the Supreme Court.

Patrick Strawbridge will argue on behalf of Students for Fair Admissions in the University on North Carolina case. Strawbridge has represented Trump in Jan. 6 matters, challenges to 2020 election results in key states and in a bid to shield his tax returns from House investigators.

Cameron T. Norris, who has also represented Trump, will represent Students for Fair Admissions in the Harvard case.

Both men are partners at Consovoy McCarthy PLLC — and both are former clerks to Supreme Court Justice Clarence Thomas.

The justices on Monday will hear two major cases, the first starting at 10 a.m. regarding affirmative action at the University of North Carolina. The second case of the day will be about the policy at Harvard University.

Students for Fair Admissions, a group of students and parents led by conservative activist Edward Blum, has led the opposition to race-conscious admissions policies.

The organization sued the schools in 2014, alleging illegal racial discrimination against Asian American applicants during the admissions process. The schools have countered that court precedent makes clear that the consideration of race is allowed to address inequality.

A federal district court rejected SFFA’s claims, as did an appeals court. Now, the Supreme Court is being asked to weigh in on 40 years of precedent.

More information about the cases can be found here.

Ahead of the oral arguments at the Supreme Court on Monday, ABC News spoke with college students from public and private colleges on what they think about the decades-old admissions policy.

Some students said the race-conscious policy was meaningful and important. One junior at Harvard University, one of the schools where affirmative action is being challenged, said: “We can’t just look at singular, individual numbers to determine who is most qualified or who should belong. We have to look at what adversity that they faced, what opportunities they have, how did they use those? Taking race into account is very important to ensure that we have a fair representation of people.”

Another student from Fordham University believed not including race on in the admissions process would provide a “more holistic review” of the applicant.

“You kind of get to see the student academically, what they really are,” they said. “You read a personal statement, you see their SAT scores. I think that in itself should say more about the student than the race.”