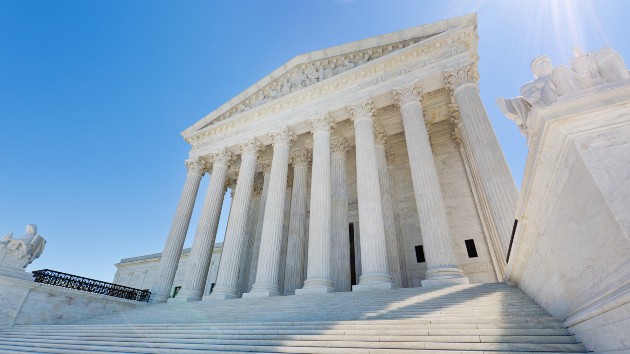 (WASHINGTON) — The opening term of the most conservative Supreme Court in a generation was supposed to bring an eruption of pent-up ideological rage. Instead, it’s closing with astonishing bonhomie.

The rushed confirmation of Justice Amy Coney Barrett in October, which solidified the court’s 6-3 majority of Republican-appointees, raised hopes on the right and fears on left of an imminent blow to Obamacare, rollback of abortion rights and downgrade of LGBTQ equality in the name of religious freedom.

“Many people expected that it would be a bunch of six to three decisions with Justice Barrett replacing the late Justice (Ruth Bader) Ginsburg,” said Jeffrey Rosen, a constitutional law professor and president of the National Constitution Center. “But that’s not what happened.”

The nine justices have charted a surprising course down the middle in 2021, handing down more unanimous opinions than any time in at least the last seven years.

An ABC News analysis found 67% of the court’s opinions in cases argued during the term that ends this month have been unanimous or near-unanimous with just one justice dissenting.

“The new justices — Justices (Brett) Kavanaugh and Barrett — decided to join Chief Justice John Roberts and Justice (Stephen) Breyer as well as Justice (Elena) Kagan in the project of bipartisan unanimity,” said Rosen. “Roberts has said that was his goal ever since he became chief, but he acknowledged that it was up to his colleagues about whether or not it would work.”

While the court still has five cases pending — decisions that are likely to be fractured — the show of consensus this year will remain well above average regardless of their outcome.

“There’s no question in my mind that the justices have worked very hard to issue unanimous or near-unanimous rulings this term,” said former Supreme Court clerk and Cardozo law professor Kate Shaw, who is also an ABC News contributor. “The justices pride themselves on standing outside of the world of politics, and they’re well aware that the court was the subject of a great deal of political attention over the last year.”

Democrats, angered by Senate Republicans’ obstruction of President Barack Obama’s court nominee Merrick Garland in 2016 and the rushed confirmation of Barrett in 2020, ramped up calls to overhaul the Supreme Court’s structure.

President Joe Biden’s commission to examine potential changes to the court’s size, tenure provisions and other procedures will hear its first expert testimony Wednesday at a public hearing.

“I think this term’s unanimous opinions need to be understood against that backdrop — as the court asserting that the justices are not just politicians in robes, and they won’t necessarily rule in line with the expectations of politicians and pundits,” Shaw said.

A fully unified court handed down opinions reinstating rape convictions against three military service members; allowing three Muslim men to sue U.S. officials for damages over wrongful placement on the no-fly list; and striking down the NCAA’s cap on education-related gifts and benefits that schools may provide student athletes.

A pair of 9-0 decisions bolstered rights of the criminally accused, affirming that police officers must obtain a warrant to enter a home and to seize property, even if they’re there for purposes of “community caretaking.”

In a major case involving religious liberty and LGBTQ rights, liberal justices joined the conservatives to side with a Catholic Social Services agency in its dispute with the city of Philadelphia over screening of parents for foster care.

“They didn’t settle the broad question of whether people cannot obey anti-discrimination laws if they disagree with them, but instead just focused on the particular case at hand,” Rosen said.

Many of the court’s unanimous opinions have been narrow, focusing on facts limited to a case while largely avoiding more controversial overarching issues. The Philadelphia foster care decision was a rare instance in which both sides said they found reason to be upbeat.

“I suspect the justices feel there is value in conveying to the American people that in a hyper-partisan moment, in which we saw deadly political violence in connection with a presidential election, the court remains a largely nonpartisan institution,” Shaw said.

All three female justices — Barrett, Kagan and Sonia Sotomayor — for the first time dissented from their male counterparts in a 6-3 decision earlier this week involving the Renewable Fuel Standard and small refineries.

“The chief may no longer be the swing vote but — with the help of Justice Breyer, who is now the most senior Democratic appointed justice — he is still wielding enormous influence,” said Sara Isgur, a former Justice Department lawyer, host of the “Advisory Opinions” podcast and an ABC News contributor. “(He’s) steering the court toward narrower, more incremental outcomes while attempting to shield the court from getting entangled in the political battles of the day.”

Not everyone is celebrating the court’s approach, however.

Progressive legal activists and some Democratic lawmakers claim that the conservative justices are lying in wait, and that decisions like the unanimous Philadelphia foster care decision should ring “alarm bells.”

“We have progressive justices being forced to compromise with bigots just to avoid an even worse, more broad ruling allowing government-sanctioned discrimination,” said Aaron Belkin, director of Take Back the Court, a left-wing advocacy group.

“The three liberal justices are attempting to buy time, but they are far outnumbered by hyper-conservative justices, including those in stolen seats and time is running out,” he said.

Belkin is part of a constellation of liberal groups lobbying Congress and Biden to add seats to the Supreme Court and appoint more liberal members as a counterbalance to the conservative majority. Biden has said he disfavors the idea.

“We know that court reform is on the justices’ minds,” said Rosen. “Justice Breyer said it was in a recent speech at Harvard Law School and he warned Democrats not to pack the courts because he said that maintaining nonpartisan legitimacy of the courts is necessary to preserving the rule of law.”

Public opinion of the court has been steadily rising over the past decade, according to Gallup’s tracking poll. Roughly half of Americans say they approve of how the justices are handling their job, compared with just a third voicing approval of Congress.

Next term, which starts in October, may mark the beginning of a different chapter.

“It might not be so easy to find unanimity on abortion, gun rights and potentially affirmative action,” Isgur said. “All will take center stage in the run up to a contentious midterm election.”