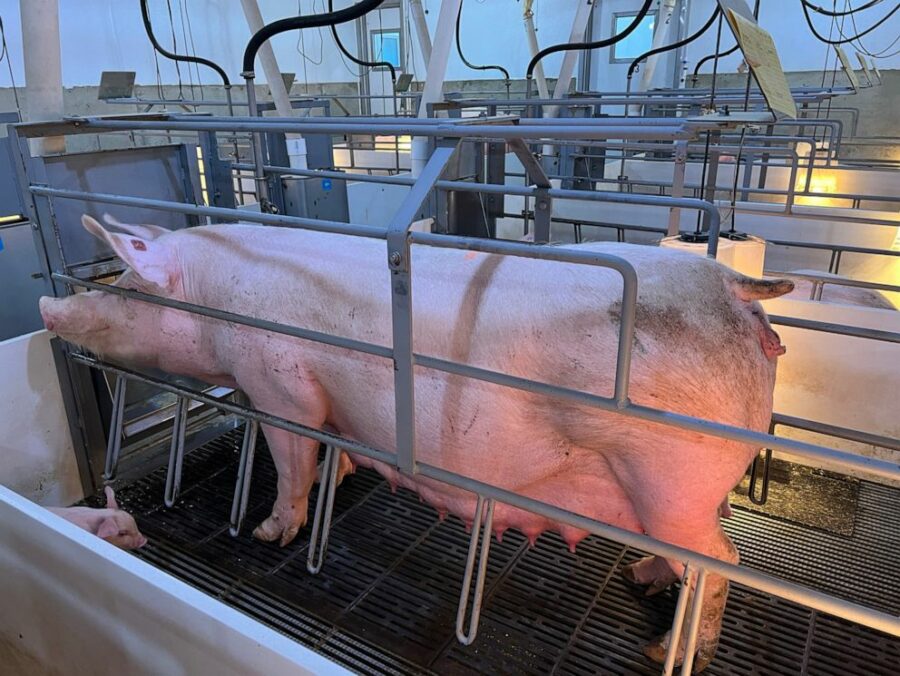 (MARSHALL, Minn.) — A battle over bacon is headed to the U.S. Supreme Court with major stakes for farmers, pregnant pigs and the prices Americans pay at the grocery store.

The nation’s $20-billion pork industry is asking the justices to strike down California’s Proposition 12, which would ban the sale of all pork from mother pigs housed in cages or crowded group pens with less than 24-square-feet each — the amount of room needed for an animal to turn around.

Oral arguments in the case are set for Tuesday.

Proposition 12 was approved four years ago, though it never took effect and is now on hold pending judicial review. Opponents call the rules overly restrictive on their businesses — with ramifications beyond one state. California officials note that voters backed the changes by 63% in 2018 and should, they say, have the power to regulate their food as they see fit.

Third-generation Minnesota pork farmer Mike Boerboom, who opposes the law and raises more than 400,000 pigs a year, has his own concerns. “When you need to make changes just to comply with the California market, I’m very worried about what our long-term success would be,” he told ABC News.

Most American pork is produced in facilities like Boerboom’s that do not meet Prop 12 standards, according to the National Pork Producers Council. The typical farm affords 16-18 square-feet per pig.

“It’s maximizing profits over welfare and over human health. It’s about confining as many animals as you can and churning out as much product as you can,” said Kitty Block, president and CEO of the Humane Society of the U.S., which has led a defense of California’s law.

“In addition to the extreme cruelty, it’s a human health problem,” Block said. “When you confine animals in these terrible conditions, it is a breeding ground for viruses.”

Prop 12 would have the biggest impact in other states: California consumes 13% of U.S. pork, the largest market in the country, but produces just 1%, according to the U.S. Department of Agriculture.

Farmers in heavy pork-producing states like Iowa, Minnesota and North Carolina say it will cost billions of dollars to retool their operations to comply with California’s law, resulting in less efficient and environmentally sustainable production of one of the most popular meats in America.

“We’ve been raising pigs in confinement for 40 years,” said Boerboom, whose 4,000 sows deliver 100,000 baby pigs per year — enough to feed nearly half a million people.

“To eliminate gestation stalls completely would be a step in the wrong direction in terms of treating that animal with respect,” he said of the confinement of sows to individual narrow stalls, or crates, during breeding as opposed to open spaces or group pens. “I would rather have these hogs housed individually after weaning to prevent them from fighting with each other.”

Some independent economists have also warned that Prop 12 could lead to pork price inflation at grocery stores, especially in California.

“Even if it’s only $0.25 a pound or something, that adds up quite a bit over time,” said economist Barry Goodwin, a professor at North Carolina State University who specializes in the pork industry.

The Biden administration has taken the side of pork farmers, concerned that a single state should not be allowed to excessively disrupt a major American industry.

The Constitution’s so-called “dormant” commerce clause has been widely interpreted to prohibit states from passing laws that would have an excessive impact on interstate trade or the economic interests of other states. The Supreme Court’s view of the clause will be key to the fate of Prop 12.

“Other states might well condition in-state sales on even more square feet of space per hog, or on compliance with requirements concerning animals’ feed, veterinary care, or virtually any other aspect of animal husbandry,” U.S. Solicitor General Elizabeth Prelogar wrote in a brief to the high court. “The combined effect of those regulations would be to effectively force the industry to ‘confirm’ to whatever state (with market power is the greatest outlier.”

As the court takes up the case — National Pork Producers Council v. Ross — there are signs market forces and consumer preferences are already nudging producers toward what animal advocates consider more ethical practices.

The Jovaag Family Farm is part of the Niman Ranch network of family farmers who specialize in certified “humanely-raised” pigs and other animals. They abandoned gestation stalls, or crates, years ago and now give pregnant sows more than 60-square-feet each, piles of comfortable hay and fresh air and sunlight.

Major pork producers like Hormel and Tyson Foods — who initially opposed Prop 12 — say they are preparing to comply with at least parts of the law because of growing demand for humanely raised meat.

The average American consumes more than 50 pounds of pork a year, according to government data.

But the industry wants the Supreme Court to make clear that companies — not individual states like California — decide what’s best for their businesses in the marketplace.

“With California making those rules affecting us as Minnesotans, Minnesota pig farmers, we don’t get that seat at the table,” said Lori Stevermer, vice president of the National Pork Producers Council.

“If we want to sell our pork into their state, we have to adhere to those regulations,” Stevermer said in an interview at the Minnesota State Fair. “The impact could be less pork, right? Or else more expensive pork, neither of which is good for consumers.”

Mike Boerboom, the third-generation farmer, hopes the justices will conclude that Californians have gone too far. “We produce a lot of food to feed the rest of the country,” he said. “It’s California today, but are there going to be more mandates that come potentially from every other state? That’s the fear,” he added.

It’s a debate over humanity and hogs that the justices are expected to settle early next year.