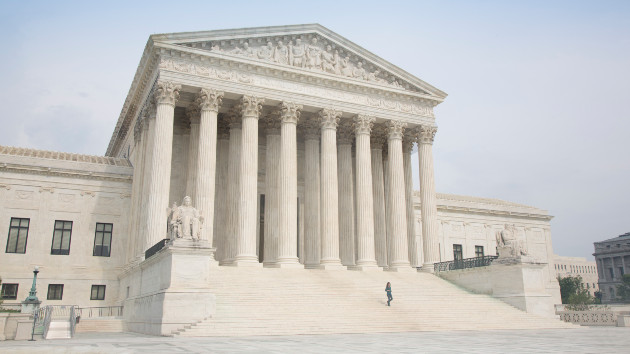 (WASHINGTON) — The U.S. Supreme Court has reinstated Alabama’s new GOP-drawn congressional map over the objection of civil rights groups and decisions of two lower courts finding that it dilutes the influence of Black voters in violation of the Voting Rights Act.

The vote to temporarily stay a lower court order blocking the map was 5-4, with Chief Justice John Roberts joining the court’s three liberals in dissent.

The decision means Alabama will not immediately have to redraw its political lines to include a second majority-Black district, as had been ordered by a District Court judge, allowing the original maps to take effect for midterm elections.

At the same time, the Supreme Court’s majority said it would take up the Alabama redistricting case on the merits later this year.

Justice Brett Kavanaugh, in a statement concurring with the decision, argued that the court should stay out of the political process so close to an election, insisting the decision makes “no new law regarding the Voting Rights Act” and simply allows time for a full briefing and oral argument.

“To reiterate: The Court’s stay order is not a decision on the merits,” he said.

The court’s liberals, however, weren’t buying it.

Justice Elena Kagan, in a pointed dissent, accused her colleagues of going “badly wrong” and forcing “Black Alabamians to suffer what under that law is clear vote dilution.”

“That decision does a disservice to our own appellate processes, which serve both to constrain and to legitimate the Court’s authority. It does a disservice to the District Court, which meticulously applied this Court’s longstanding voting-rights precedent,” Kagan wrote. “And most of all, it does a disservice to Black Alabamians who under that precedent have had their electoral power diminished—in violation of a law this Court once knew to buttress all of American democracy.”

Roberts also wrote in dissent that he would have allowed the District Court’s order to stand given that its analysis of the case in his view “seems correct.”

“We are disappointed by today’s decision. The fight for fair representation for Black voters in Alabama has been a winding road, generations long,” said Evan Milligan, an Alabama voter who helped bring the legal challenge to the state’s new map. “We won’t dishonor their legacy by putting down the torch they have handed to us. We will continue striving to ensure that our legislature honors the Voting Rights Act and that Black Alabamians have an opportunity to elect a candidate of their choice.”

Just over a quarter of Alabama voters are Black, according to Census data, but under the proposed maps the state would have just one majority-Black district out of seven. The appeals court panel said an additional Black-majority district needed to be added.

“Black voters have less opportunity than other Alabamians to elect candidates of their choice to Congress,” the panel wrote.

Alabama is appealing the decision, saying it would force the state to draw lines based solely on race and at a “late hour” ahead of midterms, creating voter chaos. Republicans allege the claims are less about racial representation than they are about Democrats trying to take back power.

Experts say the Supreme Court’s reasoning in the case, after it’s argued and decided on the merits, could potentially have a sweeping impact, serving as the basis for challenges to maps in California, Texas, New York, North Carolina and other states where maps face similar objections from minority voters.