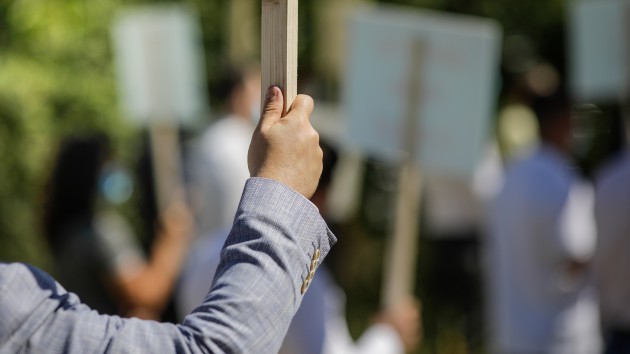 (WASHINGTON) — Middle and high school students across Virginia will soon be excused from school to participate in a protest or civic event thanks to a bipartisan group of students from Virginia Young Democrats and Virginia Teenage Republicans who joined forces to successfully lobby for the new law, which started as a school board policy in Fairfax County.

The policy, which goes into effect July 1, grants students an excused absence from school one day a year to “engage in a civic or political event.” School districts in other states have passed similar policies, but Virginia is the first to pass one statewide.

“There’s this misconception that it’s only about protests, that it’s only about walking out,” said Virginia Young Democrats Teen Caucus Chair Matthew Savage, 17. “But it’s also about just getting a sense of what your government is and trying to make a difference — meeting with legislators, attending protests — it’s much more.”

Savage decided to lobby his representatives to take the 2019 Fairfax County initiative statewide after seeing another policy his school district piloted — requiring free menstrual products in schools — had passed the Virginia legislature.

He strategized with other Young Democrats and began reaching out to lawmakers, including Democrats Del. Sam Rasoul and state Sen. Jennifer McClellan, who committed to introducing it.

“It’s critically important for us not to just encourage the youth to vote, but to actually empower them and have them involved in the civic process and what better way than to have them help draft bills — which is what happened here — help them lobby and then help them actually pass these bills,” Rasoul said.

McClellan said she chose to sponsor the legislation to stoke the students’ interests.

“There is no substitute for live action, and by participating in civic events, they come alive in a way they just can’t in a book or in a lecture in the classroom, so it will spark a passion in them that hopefully will keep them engaged,” McClellan said.

Savage also reached out to his Republican counterparts who agreed to collaborate on the bill.

“I don’t think that this bill is liberal or conservative, I think it just helps students, it helps teenagers across the commonwealth get more involved, and that’s something we all need to be working towards,” said Teenage Republican Federation of Virginia Chairman Brady Hillis, 17.

Republican Del. Glenn Davis decided to co-sponsor the legislation after the GOP students reached out to him.

“In a time that is so partisan in our nation right now, to see teenage Republicans and teenage Democrats come together to work together on a bill … sometimes you have to look at the next generation to see really how the adults should be acting,” Davis said.

Not every Republican in the Virginia General Assembly was so moved.

“I’m all for educating and getting more people involved in civics but school and education is a lot more important,” said Republican Del. Wendell Walker.

Mia Tilman, now an 18-year-old freshman at the College William and Mary, used the Fairfax County policy when she was a high school senior to lobby for the Equal Rights Amendment in Washington. She said she is not sure she would have done so if her absence was unexcused because she was concerned about blemishing her record while she was applying to colleges.

Student athletes and students involved in academic clubs are excused from school for sports games and academic conferences, but there was no equivalent for a student interested in politics and civic action, Tilman said.

“To me, protesting is my academics, it is what I want to do with the rest of my life, and it holds just as much value to me as someone going to an athletic tournament to pursue their career,” Tilman said.

“There’s so much you can learn outside of the classroom,” Hymes said of her visit to the U.S. Capitol. “(In) that type of environment, the littlest thing is like a whole life lesson.”

Savage used the Fairfax County policy in order skip class and testify on the bill virtually before the state’s House Education Committee.

Gov. Ralph Northam signed the bill into law on March 12.

Savage said students from both parties in other states have begun reaching out to him, saying they are trying to work with their legislators to introduce a similar bill in their state.

“Virginia has taken a national leadership role and is a goldfish bowl for the rest of the country in terms of civic engagement now,” Savage said.