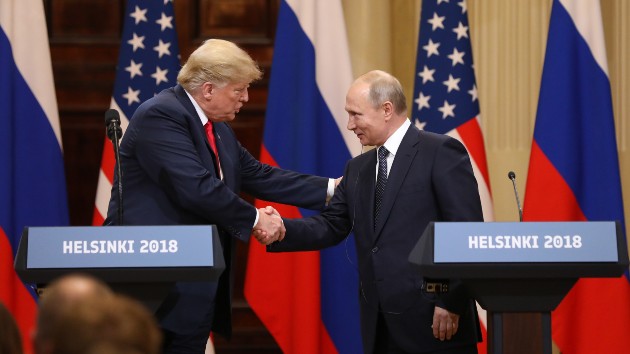 “The Biden administration is looking forward, not back,” said House Foreign Affairs Committee Chairman Gregory Meeks, D-N.Y., whose panel once considered subpoenaing Trump’s interpreter to testify about his July 2018 meeting with Putin in Helsinki, Finland, where only an American interpreter was also present.

From 2017 to 2019, amid former special counsel Robert Mueller’s investigation into Russian efforts to influence the 2016 presidential election, Democrats raised questions about Trump’s conversations with Putin, especially after Trump said in Helsinki, standing next to Putin, that he believed his 2017 denial of election interference, over the findings of U.S. intelligence.

Similar questions were raised after the disclosure of an unplanned conversation with Putin during a G-20 dinner in Osaka, Japan, in June 2019 during which Trump was not accompanied by an interpreter.

He had told reporters beforehand that his private discussions with Putin were “none of your business.”

In 2019, the Washington Post reported that the former president went to “extraordinary lengths” to conceal details of his conversations with Putin, leaving some subordinates without a clear record of the world leaders’ interactions.

Rep. Tom Malinowksi, D-N.J., a member of the House Foreign Affairs Committee who served as an assistant secretary of state in the Obama administration, said details about Trump and Putin’s conversations are “historically very interesting,” but less relevant given that Trump “is not shaping US policy towards Russia or anything else.”

Foreign policy analysts ABC News spoke with ahead of Biden’s meeting with Putin in Geneva largely downplayed concerns about Trump and Putin’s conversations, and their impact on Wednesday’s summit.

“You’d like to have it, but I don’t think it matters much,” Ian Bremmer, a political scientist and president of the Eurasia Group, who first reported Trump and Putin’s second meeting at the G-20 in 2017, told ABC News.

“What happened beforehand has obviously created an atmosphere, a situation in the United States where everyone’s going to be watching closely what happens during that meeting and what is said afterwards,” Angela Stent, the director of the Center for Eurasian, Russian and East European Studies at Georgetown University and a senior fellow at the Brookings Institution, told ABC News. “But I think the substance of what was discussed between Trump and Putin is much less important for President Biden going forward.”

To prepare for his meeting with Putin, Biden has been receiving daily briefings leading up to the summit, sessions that have included advisors and experts inside the government, and senior officials in the previous administration, including Fiona Hill, a Russia expert who served on Trump’s National Security Council.

“Biden is very engaged in those sessions,” Brett Bruen, a former diplomat who served as the director of Global Engagement at the White House during the Obama administration and participated in briefings with the then vice president, told ABC News.

“Obama would tend to listen, and ask a couple of questions, whereas with Biden it’s more of a conversation,” he said. “He does perhaps, more than any other first term president going out on his first foreign trip, have the benefit of being on the world stage for a very long time.”

In March, White House press secretary Jen Psaki told reporters she was “not aware” of any “deep dive” into finding out what Trump and Putin discussed during their one-on-one meetings. The White House declined to comment on whether the topic was revisited before Wednesday’s summit.

“From the people I’ve spoken to, the interpreter who was with Trump at the Helsinki meeting, the other people in the National Security Council at that point, they had a pretty good idea of what was said,” Stent told ABC News.

“This was the single issue that most exercised the anti-Trump voters on foreign policy,” he said. “I don’t think this will be front page news for a week.”