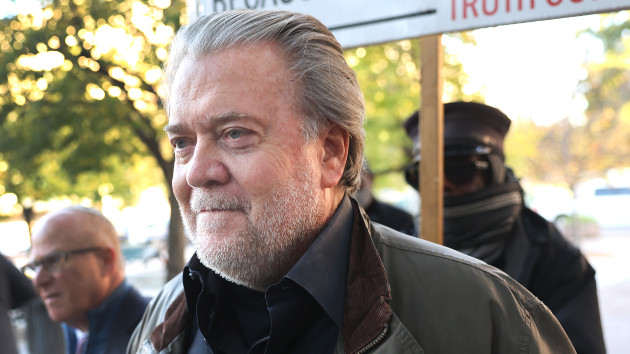 (WASHINGTON) — Former Trump adviser Steve Bannon is scheduled to be sentenced today following his conviction on two counts of criminal contempt of Congress, after he defied a subpoena from the House select committee investigating the Jan. 6 attack on the U.S. Capitol.

He was subpoenaed by the Jan. 6 panel for records and testimony in September of last year. He refused to comply and was found guilty of contempt in July.

Speaking to reporters outside the courthouse after receiving his four-month sentence, Bannon said he respected the judge’s decision. But he was defiant about his conviction, and his attorney confirmed he would be filing a notice of appeal.

Bannon also attacked the Jan. 6 committee and urged people to vote in the upcoming election.

Protesters nearby chanted “traitor” and “liar” as he spoke.

In sentencing Bannon to four months, Judge Nichols reiterated how serious the events of Jan. 6 were and said the congressional committee has every reason to investigate what happened that day and to prevent anything like it from happening again.

Nichols emphasized that Bannon has not produced a single document or any testimony to the Jan. 6 committee — nor did he provide a log of documents that he believed to be covered by executive privilege.

However, the judge said the factors in Bannon’s favor include that he was taking the advice of counsel, even if it was misguided. Nichols also said the committee did not attempt to sue Bannon to enforce their subpoena.

The four-month sentence is two months shorter than the sentence prosecutors had been seeking.

Steve Bannon has been sentenced to four months in prison and has been ordered to pay a fine of $6,500.

However Judge Nichols said he agreed that Bannon should not have to serve a sentence while he appeals his case, which Bannon has indicated he will do.

Bannon attorney David Schoen took exception to the suggestion that Bannon did not have a legitimate claim of executive privilege when he rejected the committee’s subpoena.

In particular, Schoen went after Trump lawyer Justin Clark, who told DOJ investigators in July that at no point did former President Donald Trump ever invoke executive privilege over Bannon’s testimony.

“You wouldn’t believe a thing he says,” Schoen said of Clark, who also contradicted other claims made by Bannon’s defense team in their case.

Federal prosecutor J.P. Cooney argued that Bannon is not above the law and should be sentenced and treated like any other citizen.

“It must be made clear to the public and the grand jury … that no one is above the law,” Cooney said. “He hid behind a fabricated claim of executive privilege, to thumb his nose at Congress.”

“He had an interest in making a public spectacle of the committee’s hearings,” Cooney told the judge, saying that Bannon “has tried to make it about nothing but politics and retribution.”

The hearing got underway with Judge Carl Nichols saying he tended to agree with the government on the sentencing guidelines.

The judge said that Bannon “has expressed no remorse for his actions” and hasn’t demonstrated that he has any intention of complying with the subpoena from the Jan. 6 committee.

Bannon attorney David Schoen argued that there should not be a 30-day mandatory minimum of jail time for the offense.

Nichols, however, rejected that argument, saying the statute is clear on the point that there is a mandatory minimum of 30 days and a mandatory maximum of 12 months.

Bannon arrived at the courthouse before 9 a.m. He thanked the TV news cameras for being there and called the Biden administration illegitimate.

He also thanked a woman who was chanting “traitor.”

Bannon, whose sentencing hearing is scheduled for 9 a.m. EST, blasted members of the Jan. 6 committee on his way out of the courtroom after being found guilty in July.

Bannon’s attorney, David Schoen, said that Bannon’s defense team would appeal the case, saying, “This is just Round 1.”

Bannon is scheduled to be sentenced this morning in Washington, D.C. He was interviewed as part of the court’s presentencing investigation, but prosecutors said he refused to disclose any information about his finances.

They did, however, say that Bannon insisted “that he is willing and able to pay any fine imposed, including the maximum fine on each count of conviction,” according to Monday’s court filing.

“For his sustained, bad-faith contempt of Congress, the Defendant should be sentenced to six months’ imprisonment — the top end of the Sentencing Guidelines’ range — and fined $200,000 — based on his insistence on paying the maximum fine rather than cooperate with the Probation Office’s routine pre-sentencing financial investigation,” prosecutors said in Monday’s filing.

The Department of Justice is seeking six months in prison and a fine of $200,000 when Steve Bannon is sentenced this morning, according to a court filing Monday.

The adviser to former President Donald Trump was convicted in July on two counts of criminal contempt of Congress, after he refused to appear before the House select committee investigating the Jan. 6 attack.

“From the time he was initially subpoenaed, the Defendant has shown that his true reasons for total noncompliance have nothing to do with his purported respect for the Constitution, the rule of law, or executive privilege, and everything to do with his personal disdain for the members of Congress sitting on the Committee and their effort to investigate the attack on our country’s peaceful transfer of power,” prosecutors said in Monday’s filing. “[Bannon’s] abject refusal to heed the Committee’s subpoena, under the circumstances with which this country is confronted, could not be more serious.”

Bannon faces a maximum sentence of one year per count, for a total of two years behind bars.

In his own sentencing memorandum, Bannon asked that he be sentenced to a period of probation and is seeking a stay of any sentence pending appeal of his conviction.