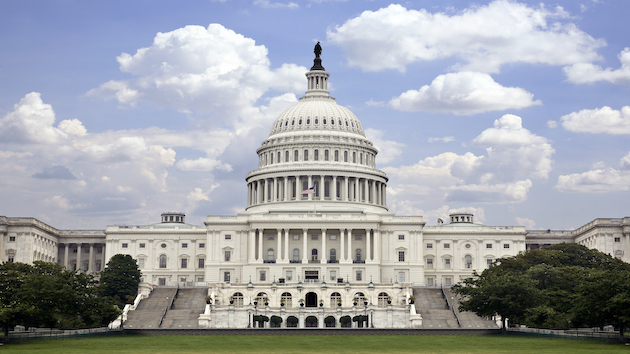 (WASHINGTON) — A tri-partisan group of senators on Tuesday introduced legislation designed to claw back national security powers, delineated in the Constitution, from the executive branch that the Senate trio says have been flowing away from Congress after decades of inaction by lawmakers.

“The founders envisioned a balance of power between the executive and legislative branches of government on national security matters. But over time, Congress has acquiesced to the growing, often unchecked power of the executive to determine the outline of America’s footprint in the world. More than ever before, presidents are sending men and women into battle without public debate, and making major policy decisions, like massive arms sales, without congressional input,” said Sen. Chris Murphy, a senior member of the Foreign Relations Committee a bill cosponsor, along with Sens. Bernie Sanders, I-VT, and Mike Lee, R-Utah.

The three-pronged National Security Powers Act would place Congress in a more proactive role of having to affirm executive action on more controversial arms sales — particularly of lethal weapons, including air to ground munitions, tanks, and armored vehicles, as opposed to the current method requiring lawmakers to reject a sale with a veto-proof majority; would replace the 1973 War Powers Act with new policy that would require congressional authorization of military operations by a President after just 20 days instead of the current 60; and require that Congress approve a national emergency declaration after 30 days from presidential enactment.

“The president can declare a national emergency and act on that for a 30-day period, but after that, if Congress chooses not to enact a law to approve of the move, (called a joint resolution of approval) — that ability for the president would expire after 30 days,” according to a senior Senate GOP aide briefing reporters on the proposal.

President Donald Trump, in a highly controversial move in 2019, declared a national security emergency on the southern border to build his wall in that space. There was bipartisan support at the time to stop him but not a veto-proof majority. The Murphy-Sanders-Lee legislation would “flip the script” and put Congress in a position to more easily stop such executive action.

What senators also discovered at the time was that some 30 national emergency declarations were still in effect going back decades. The proposed legislation would sunset those declarations without explicit Congressional approval, putting a five-year limit on future moves.

The tri-partisan proposal comes as Washington is moving to rescind a 2002 Authorization for the Use of Military Force (AUMF) approved ahead of the Iraq war. There is also growing support to rework or possibly end the 2001 AUMF that led to America’s longest war in Afghanistan where U.S. troops have just been sent home. Under the newly-introduced legislation, those AUMF’s would expire, and all future AUMF’s would require an expiration date.

The new legislation, which is sure to spark heated debate among hawks and those who doubt Congress’ authority to rein in executive powers where national security is concerned — despite the Constitution’s delineation that Congress has the sole power to declare war — would more strictly-define “hostilities” as any that require U.S. troops, as opposed to the current unwritten rule that basically requires U.S. service member boots on the ground.

“Presidents of both parties have usurped Congress’s prerogative to determine if, when, and how we go to war. Now America’s global standing, treasure, and brave service members are being lost in conflicts the people’s legislators never debated. In areas where the Constitution grants broad powers to Congress, Congress is ignored. The National Security Powers Act will change that and return these checks and balances to our government,” Lee said.

It is unclear where support lies for the proposal in Congress, particularly among leadership, and Senate aides close to the matter say that there was no consultation with the White House or Administration officials.

Still, the group says the time to act is now.

“Before it’s too late, Congress needs to reclaim its rightful role as co-equal branch on matters of war and national security. The bipartisan National Security Powers Act will make sure that there is a full, open and public debate on all major national security decisions, such as war making, arms sales and emergency declarations,” Murphy said.