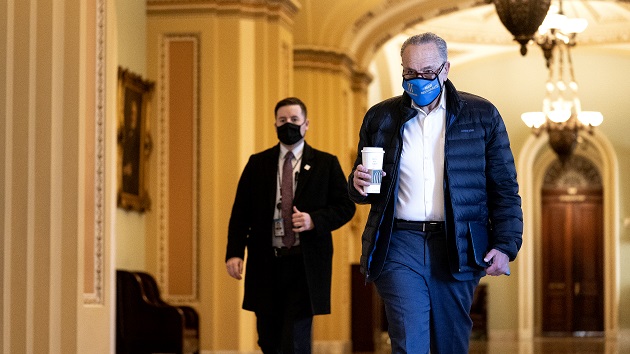 (WASHINGTON) — The Senate is taking up the $1.9 trillion coronavirus relief bill Thursday, but before voting on President Joe Biden’s signature legislation, Republicans who claim the bill is massive and won’t address issues related to the pandemic have set the stage for a lengthy series of procedural measures designed to slow down momentum.

Democrats are projecting that they will hold together and vote unanimously in favor of the aid after Biden made concessions to appease the moderates. If they stick together, there’s little the GOP can do to prevent it from passing in the evenly divided Senate.

But that won’t stop Republicans from fighting to make passage an arduous affair.

Sen. Ron Johnson, R-Wis., announced that he intends to extend the length of debate by several hours by requiring the Senate clerk to read the nearly 600-page bill aloud in full. Aides estimated this could take somewhere between eight and 10 hours.

Final bill text and cost estimations are not yet available to senators. Johnson said he’s requesting a full reading of the bill in order to give staffers and lawmakers more time to familiarize themselves with what is in the bill and to propose additional amendments.

“I feel bad for the clerks are going have to read it, but it’s just important you so, so often we rush these massive bills that are hundreds of 1000s of pages long. You don’t have time. Nobody has time to read them,” Johnson said. “This will give everybody time to consider what the provisions are.”

“We all know this will merely delay the inevitable,” Schumer said. “It will accomplish little more than a few sore throats for the Senate clerk.”

Republicans also plan to offer a laundry list of amendments to make good on Minority Leader Mitch McConnell’s promise that Republicans will be “fighting in every way we can” to block the bill.

The last marathon-voting session on the bill lasted about 15 hours. Sen. Mike Braun, R-Ind., called that a “warm-up session” for what’s to come on the vote for final passage.

The bill cleared the House without a single Republican backer and McConnell said he is hopeful that Senate Republicans will also “unanimously oppose” the bill. It’s not yet clear whether he’ll have his way.

Moderate Republican Sen. Lisa Murkowski hasn’t yet said how she intends to vote on the bill, and in recent days, Biden has made concessions to appease moderates within the Democratic caucus — that could also earn favor with moderate Republicans.

The Senate version of the bill does not include language that would have required a raise in the minimum wage to $15 an hour, for example. The proposal, which was unpopular with moderate Democrats Joe Manchin, D-W.Va., and Kyrsten Sinema, D-Ariz., was ruled out of bounds for a budget bill by the Senate parliamentarian.

Finance Chairman Ron Wyden, D-Ore., estimated this would decrease the cost of direct checks by $12 billion.

A total cost of the bill is still not publicly known. Members were waiting for a final score before they proceeded to debate Thursday.

White House press secretary Jen Psaki said Wednesday that Biden had been listening closely to the suggestions of Manchin and other moderates on the bill — and with the new changes — Manchin seemed unlikely to vote against the package.

“I just think that the bill has, really, enough good stuff — really does have enough good stuff — that we should be able to make this work — we really should,” Manchin said. “I’m very pleased with the discussions and dialogues and some changes that have been agreed upon.”

Democrats on Thursday said they were confident they could move through the procedural hoops and pass the legislation.

“We don’t have time for the politics that are going on right now,” Sen. Debbie Stabenow, D-Mich., said Thursday. “We’re going to just going to keep drinking coffee and getting this thing done.”