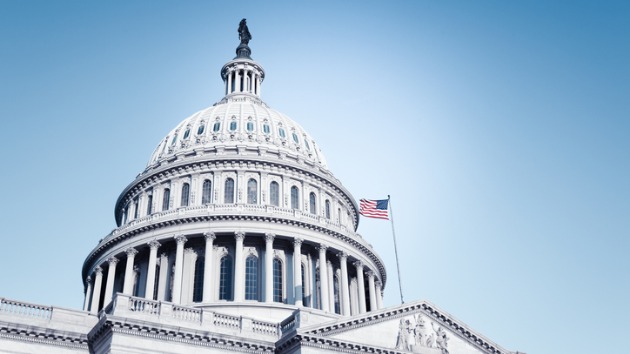 (WASHINGTON) — Republicans on Tuesday blocked the Senate from moving forward on a sweeping elections reform bill known as the For The People Act that was a top priority for congressional Democrats and President Joe Biden.

Democrats were able to stay unified — with West Virginia Sen. Joe Manchin voting with his party in the procedural vote to open debate on the measure — but their 50 votes in favor fell 10 short of the 60 needed under Senate rules to advance legislation.

Vice President Kamala Harris, whom Biden has tasked with getting voting rights reform passed, presided in her role as president of the Senate and announced the 50-50 final vote in the Democratic defeat.

All GOP senators voted no.

Immediately afterward, Majority Leader Chuck Schumer took the floor to say Republicans had aligned themselves forever with former President Donald Trump and what Schumer called his “big lie,” to their “enduring disgrace.”

Republicans had accused Democrats of a blatant power grab.

“What this is really about is an effort of the federal government to take over the way we conduct elections in this country. It is a solution in search of a problem. And so finally today we will put an end to it here in the Senate,” McConnell told reporters before the vote.

But Democrats insisted that a federal response was needed to the 14 red states across the country where Republicans have enacted laws critics say curb voting of minority voters who tend to support Democrats.

“What kind of Congress would we be in the whole history of Congresses if seeing that discussion out there we refuse to even debate the matter in here? Who are we and how are we to hide in a moment like this?” Sen. Raphael Warnock, D-Ga., asked his colleagues.

“So I rise … with what I think is a simple request to my colleagues. Let’s do our job. Resist the easy route, the temptation to hide behind Senate procedure, and let’s have a principled conversation in front of the American people about voting rights,” Warnock said on the Senate floor before the critical vote.

Earlier in the day, Schumer announced he had won the last-minute support of Manchin, the lone holdout member of his caucus — a key victory presenting a unified front to GOP opposition despite the failed vote.

“We got it,” Schumer said with a grin, announcing the agreement that he reached with Manchin to allow him to offer an amendment to make changes to the basic reform bill should the Democratic majority be able to secure 60 votes to break the GOP filibuster and start debate on the bill.

“We just got to keep working,” Manchin, who has opposed changing the Senate’s filibuster rule, told ABC News Congressional Correspondent Rachel Scott earlier in the day.

“The fight is not over,” she said.

“In supporting the For the People Act and defending the rights of voters, they stood united for democracy. They stood against the ongoing assault of voter suppression that represents a Jim Crow era in the 21st Century,” he said.

“Unfortunately, a Democratic stand to protect our democracy met a solid Republican wall of opposition. Senate Republicans opposed even a debate—even considering—legislation to protect the right to vote and our democracy.

“It was the suppression of a bill to end voter suppression—another attack on voting rights that is sadly not unprecedented,” he said.