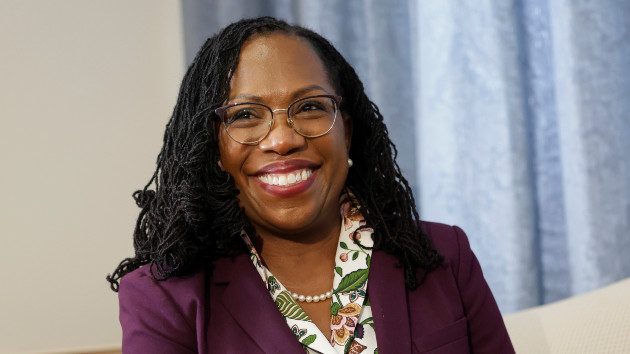 (WASHINGTON) — The U.S. Senate is poised to vote to confirm Judge Ketanji Brown Jackson to the Supreme Court on Thursday, paving the way for Jackson to become the first Black woman in history to sit on the nation’s highest court.

“It will be a joyous day. Joyous for the Senate, joyous for the Supreme Court, joyous for America,” Senate Majority Leader Chuck Schumer said Wednesday evening. “America tomorrow will take a giant step to becoming a perfect nation.”

It’s still unclear whether President Joe Biden will make an appearance following the afternoon vote, which is expected to be called around 1:45 p.m., or whether Vice President Kamala Harris, as president of the Senate, will preside over the chamber for the historic occasion.

While Democrats have the votes to confirm Biden’s nominee on their own, three Republicans — Sens. Susan Collins, Lisa Murkowski and Mitt Romney — will break ranks from the GOP to join them, marking a solid, bipartisan win for the Biden White House in a hyper-partisan Washington. Former President Donald Trump’s last nominee, Justice Amy Coney Barrett, received no votes from Democrats.

If confirmed, Jackson is not expected to be fully sworn in for duty until summer, once retiring Justice Stephen Breyer steps down.

In marathon hearings before the Senate Judiciary Committee last month, Jackson was given the opportunity to tell the panel — and the American people — what it would mean to her to serve on the nation’s highest court.

“I stand on the shoulders of so many who have come before me, including Judge Constance Baker Motley, who was the first African American woman to be appointed to the federal bench and with whom I share a birthday,” Jackson said. “And, like Judge Motley, I have dedicated my career to ensuring that the words engraved on the front of the Supreme Court building — ‘Equal Justice Under Law’ — are a reality and not just an ideal.”

Jackson endured nearly 24 hours of questioning from senators in the, at times, contentious and emotional hearings.

“Not a single justice has been a Black woman. You, Judge Jackson, can be the first,” said chairman Dick Durbin, D-Ill. “It’s not easy being the first. You have to be the best and in some ways the brightest. Your presence here today and your willingness to brave this process will give inspiration to millions of women who see themselves in you.”

Meanwhile, several Republicans assailed Jackson with accusations that she’s a liberal activist and “soft on crime”– taking issue with nine child pornography sentences she handed down, criticizing her legal work for Guantanamo Bay detainees, and questioning support she received from progressive groups.

“In your nomination, did you notice that people from the left were pretty much cheering you on?” asked Republican Sen. Lindsey Graham of South Carolina.

“A lot of people were cheering me on, senator,” she replied.

Notably, Graham voted to confirm Jackson to a lifetime judicial appointment last year but said he’ll vote no this time — and warned that if Republicans had control of the Senate, Jackson wouldn’t have received hearings to begin with.

Others in the GOP pressed Jackson to explain critical race theory, say whether babies are racist, and to define “woman” — questions which Democrats repeatedly criticized as they took to defending her record and applauding her character.

“You did not get there because of some left wing agenda,” Sen. Cory Booker, D-N.J., told her in a dramatic soliloquy, moving Jackson to tears. “You didn’t get here because of some dark money groups. You got here how every Black woman in America who has gotten anywhere has done. You are worthy. You are a great American.”

While Senate Minority Leader Mitch McConnell called Jackson’s performance, at times, “evasive and unclear,” scrutinizing her judicial philosophy, Jackson insisted “there is not a label” for her judiciary philosophy — because she says she doesn’t have one. She told the committee, “I am acutely aware that, as a judge in our system, I have limited power, and I am trying in every case to stay in my lane.”

At age 51, Jackson currently sits on the U.S. Court of Appeals for the D.C. Circuit to which she was named by Biden and confirmed by the Senate last year in a bipartisan vote. She has also been Senate-confirmed on two other occasions.

She will replace Justice Breyer, whom she once clerked for, when he retires at the end of the term. Jackson said last month, “It is extremely humbling to be considered for Justice Breyer’s seat, and I know that I could never fill his shoes. But if confirmed, I would hope to carry on his spirit.”

When Biden formally announced Jackson’s nomination at the White House, he fulfilled a promise made on the 2020 presidential campaign ahead of the South Carolina primary when he relied heavily on support from the state’s Black voters.

“For too long our government, our courts haven’t looked like America,” he said on Feb. 25. “And I believe it is time that we have a court that reflects the full talents and greatness of our nation with a nominee of extraordinary qualifications.”

Jackson’s parents, Johnny and Ellery Brown, Miami natives who grew up under segregation in the South, were on hand at the historic hearings to support their daughter — who they say was once told by a school guidance counselor to lower her sights.

Growing up, her mother was a public high school principal in Miami-Dade County, where Jackson attended public schools and was a “star student,” while her father was a teacher and, later on, county school board attorney. Jackson has fondly recalled memories of drawing in her coloring books next to her father studying his law school textbooks. Her younger brother, her only sibling, served in the U.S. military and did tours in combat. Two of her uncles have been law enforcement officers.

After graduating from Miami Palmetto Senior High School, Jackson went on to attend Harvard College and Harvard Law School. There she met her husband, Patrick, a general surgeon, and the couple share two daughters, Talia, 21, and Leila, 17.

Asked about her message to young Americans, Jackson recalled to the Senate Judiciary Committee of feeling out of place at Harvard in her first semester — and provided a remarkable lesson in resilience.

“I was really questioning: Do I belong here? Can I, can I make it in this environment?” she said. “And I was walking through the yard in the evening and a black woman I did not know was passing me on the sidewalk, and she looked at me, and I guess she knew how I was feeling. And she leaned over as we crossed and said ‘persevere."”

“I would tell them to persevere,” Jackson said.