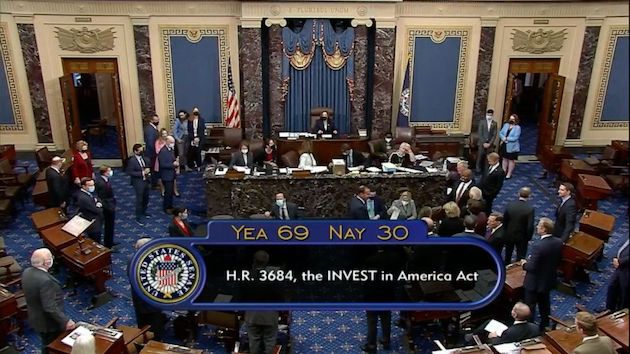 (NEW YORK) — After weeks of wrangling, the Senate on Tuesday passed a $1.1 trillion infrastructure bill with Republican support, in a big win for Democrats and President Joe Biden.

The measure passed by a vote of 69-30, with 19 Republicans joining all Senate Democrats to advance the bill out of the Senate chamber.

In a sign of its political significance, Vice President Kamala Harris presided over the final vote.

Passage represents a major victory for senators from both parties who said they were committed to showing Congress could work in a bipartisan way, as well as for President Joe Biden, who campaigned on a promise to work across the aisle.

Biden’s first reaction to the passage came via Twitter and sent a strong signal to House Speaker Nancy Pelosi that he does not want the House to delay a vote.

“Big news, folks: The Bipartisan Infrastructure Deal has officially passed the Senate. I hope Congress will send it to my desk as soon as possible so we can continue our work of building back better,” Biden tweeted.

The package took months to forge, with bipartisan negotiators Sen. Kyrsten Sinema, D-Ariz., and Portman of Ohio, a Republican, leading a group of ten colleagues in discussions that led to the final package.

Senate Majority Leader Chuck Schumer praised the package in remarks just before the final vote, saying, “We have persisted and now we have arrived. There were many logs in our path, detours along the way, but the American people will now see the most robust injection of funds into infrastructure in decades.”

“When the Senate is run with an open hand rather than a closed fist senators can accomplish big things,” he added.

The bill now heads to the House, where it faces a precarious path to Biden’s desk.

Pelosi, who leads a razor-thin majority of Democrats in the House, has made clear she has no intention of bringing the bipartisan bill to a vote until the Senate sends over a second, larger budget bill containing the rest of President Biden’s “American Families Plan” priorities.

The debate of the budget will be far different from the bipartisanship in the debate over infrastructure.

With the bipartisan bill off their plate, Senate Democrats are turning their attention immediately to passing the budget bill, and they’re expected to try to force the massive package through the Senate as early as tomorrow, without a single GOP vote. Budget bills are not subject to the regular 60-vote threshold generally necessary to move legislation forward.

Republicans have vowed to fight the budget resolution at every step, including through what is expected to be a marathon of votes this week on partisan amendments designed to score political points and make centrist Democrats squirm.

McConnell conceded Tuesday morning there will be little Republicans can do to stop the budget from advancing if Democrats keep a united front, but he promised a fight on the Senate floor.

“Republicans do not currently have the vote to spare American families this nightmare,” McConnell said of the $3.5 trillion bill. “But we will debate and we will vote and we will stand up and we will be counted and the people of this country will know exactly which senators fought for them.”

Senate action on the budget this week is just the first in a series of steps before the bill comes to a final vote in the Senate and moves to the House, likely in the fall.

Pelosi said only then, after the full budget process is completed, will she bring both the budget bill and the bipartisan infrastructure bill up for a final vote in the House.