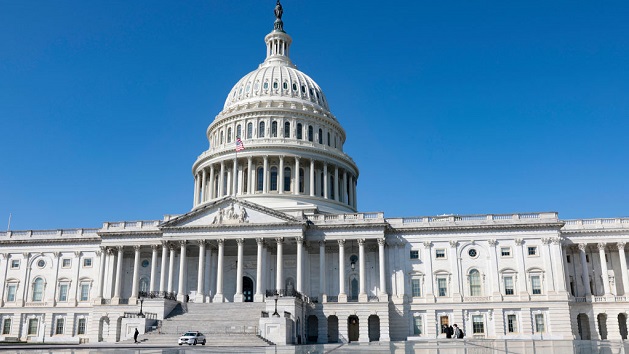 (WASHINGTON) — After weeks of pleas from the White House for Congress to approve more money toward COVID-19 programs that were at risk of being cut, Senators have put forward a new bill for $10 billion.

The package, which sets aside money to support the nation’s testing infrastructure and the development of new, variant-specific vaccines, falls far short of the initial $22.5 billion requested by the White House.

Sen. Mitt Romney, who has been leading negotiations on the bill for Republicans, announced that the new funding would be paid for entirely by offsets, meeting Republican demands to only use already-approved federal funds instead of spending any more money.

But doing so required cutting back on support for certain programs and repurposing funds that were set aside for other things. The new bill takes $500 million back from a fund to support colleges and universities during COVID, for example, and nearly $1 billion from a fund for tribal governments.

And it does not include funding for the U.S. global vaccination program, which was supporting vaccine distribution and administration in countries around the world.

Romney said he was “willing to explore a fiscally-responsible solution to support global efforts in the weeks ahead.”

Reacting to the latest deal, White House press secretary Jen Psaki said the president was “grateful” for the progress but would continue to push for more money.

“This is clearly a huge focus for the president because of the dire need we have at this moment to get this funding through and the fact that we are already at a point where we have had to halt, delay a range of programs and purchases that we feel are imperative,” Psaki said at a White House press briefing.

“I would also note that even as we’re very encouraged by the progress, we’re going to need more,” she added.

Senate Majority Leader Chuck Schumer said he was “disappointed” that global COVID aid did not make it into the package but that he intends to bring up the funding again later this year, as part of a larger global aid package.

“It is my intention for the Senate to consider a bipartisan International appropriations package that could include additional aid for Ukraine as well as funding to address COVID-19 and food insecurity globally,” Schumer said in a statement.

It’s unclear exactly what will be supported if the $10 billion package passes, as the White House asked for more than twice that amount to pay for efforts like test manufacturing, continued orders of anti-viral treatments, global vaccine efforts and future vaccines for different variants.

But if it does pass, the bill is sure to avert some of the immediate impacts of the funding stalemate.

Last week, for example, the White House warned that without any funding, the nation would only have enough tests to get through the next potential increase of cases from the BA.2 variant but wouldn’t be able to keep producing tests at the current pace after June.

“And if we fail to invest, we leave ourselves vulnerable if another wave of the virus hits,” President Joe Biden said in a speech last Wednesday.

And in the time Congress and the White House have spent squabbling over the funding, the uninsured fund ran out of money, leaving Americans who don’t have insurance to pay as much as $125 out of pocket if they get PCR testing at labs like Quest Diagnostics, one of the biggest in the country.

Funds to cover the costs of vaccination for uninsured Americans are set to run out this week.

Monoclonal antibody treatment supplies distributed to states each week have also already been impacted. And Biden warned that the U.S. supply could run out entirely by May if funding isn’t secured.

“We’ve had to cancel planned orders and cut the supply we’re sending to the states. Without more funding, we’ll start to run out of them by the end of May,” he said on Wednesday.

According to Romney’s office, half of the proposed $10 billion in funds will go to development and purchase of therapeutics, like a new variant-specific vaccine, while the other half will be given to the Department of Health and Human Services for use with slightly broader COVID-related discretion — likely for testing.

It’s not precisely clear when the Senate will vote on the measure. The chamber needs to act quickly if senators want to get it done before departing on a two-week Easter recess.