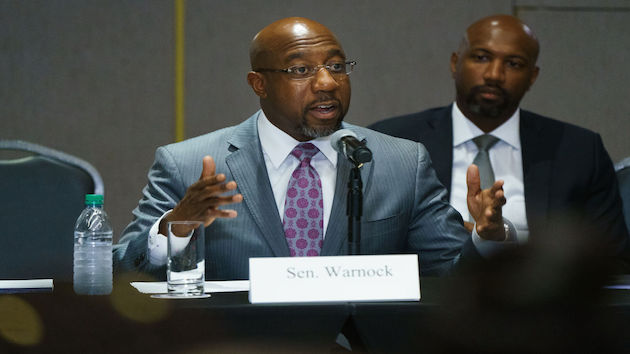 (ATLANTA) — For the first time in 20 years, the Senate Rules Committee held a field hearing on Monday, this time in Atlanta to discuss voting rights as Democrats push for federal reform in the wake of sweeping legislation in Georgia — and in GOP-led legislatures across the country — which Democrats argue will make it harder for voters to cast their ballots.

“It is no coincidence that this assault on the freedom to vote is happening just after the 2020 election, when nearly 160 million Americans cast a ballot — more than ever before — in the middle of a pandemic, in an election that the Trump Department of Homeland Security Declared the most secure in history,” Committee Chair Sen. Amy Klobuchar, D-Minn., said as she opened the hearing.

Witnesses included Sen. Raphael Warnock, D-Ga., and state lawmakers and voters who would be affected by the law — which, in part, adds a voter ID requirement and results in fewer drop boxes available in the Atlanta-area.

Those testifying focused their ire on Senate Bill 202 (SB 202), a Georgia state bill passed in March that shortens the periods between elections and runoffs, bans early voting on holidays, and makes it a crime for someone who is not an election worker to give food or drinks to anyone waiting in line.

Republican Senate Minority Leader Sen. Mitch McConnell, R-Ky., criticized the hearing in a statement as it kicked off Monday, deeming it all “phony hysteria.”

“This silly stunt is based on the same lie as all the Democrats’ phony hysteria from Georgia to Texas to Washington D.C. and beyond — their efforts to pretend that moderate, mainstream state voting laws with more generous early voting provisions than blue states like New York are some kind of evil assault on our democracy,” the GOP leader said.

But Warnock testified Georgia was “ground zero” for GOP efforts to suppress the vote.

“What we did in Georgia this last election, in terms of turnout, should have been celebrated, by everyone, regardless of political party. But instead it was attacked by craven politicians, who are more committed to the maintenance of their own power than they are to the strengthening and maintaining of our democracy,” Warnock said.

Citing restrictions in Georgia’s new law, particularly how it would prohibit non-poll workers from handing out water and would let people challenge others’ votes, Warnock called for federal voting right protections and emphasized the urgency of those efforts: “We Americans live in a great house that democracy built. Right now, that house is on fire.”

No Republicans were present at the hearing, but Republicans from Georgia — including Gov. Brian Kemp — criticized the event in a call with reporters later on Monday morning.

“Today’s hearing is just the latest attempt by the Democrats to ignore the catastrophe up in Washington, DC and also to really change the narrative that couldn’t get the federal takeover of elections in S1 [the For the People Act voting rights bill] passed through the Senate or the Congress,” Kemp said.

Klobuchar said that Republicans were invited to join; Kemp said that he was in a hearing about crime during the voting hearing, and that he does not believe Klobuchar’s hearing was fair.

The hearing comes as Senate Democrats put pressure on their colleagues across the aisle to move forward in unison on the stalled For the People Act, an expansive package that would transform federal elections, voting and congressional redistricting, which passed the House in March.

A more measured proposal with some Republican support named for the late Rep. John Lewis, D-Ga., which would restore pieces of the Voting Rights Act struck down by the Supreme Court in 2013, has also failed to advance through Congress.

Democrats argue lawmakers must act with more urgency on voting legislation also in the wake of the U.S. Supreme Court deciding last month to uphold voting restrictions in Arizona that Democrats and voting advocates have called discriminatory on the basis of race.

Monday’s hearing also comes at a busy time in Washington.

Both chambers of Congress were back in session Monday as Democrats in the Texas State Legislature took harbor in the capital for a second week in order to prevent Republicans in Austin from taking up the proposals in a special legislative session. While they had planned to push voting rights legislation on the hill, five members have tested positive for COVID-19.

And just days after Congressional Black Caucus Chair Rep. Joyce Beatty was arrested along with other activists in a display of civil disobedience on Capitol Hill, the “Women’s Moral Monday March on Washington” rally, organized by the Women’s March and Poor People Campaign, added their voices with a demonstration in front of the Supreme Court Monday.

The group demanded that Congress take action on issues such as ending the filibuster and expanding voting rights.

Sixteen states have enacted 28 laws that would restrict voting access, out of hundreds that have been introduced throughout the country, according to the Brennan Center for Justice at NYU School of Law.