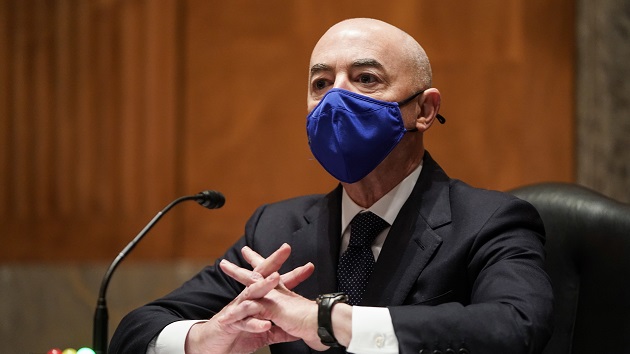 Mayorkas, a former federal prosecutor and deputy DHS secretary, faces an increasing challenge at the border and at home. He takes over a department that hasn’t had a confirmed secretary in almost two years.

The Biden administration worked quickly to try to roll back former President Donald Trump’s immigration policies including the Migrant Protection Protocols program, which keeps individuals seeking asylum into the U.S. in Mexico while they go through the asylum process.

Mayorkas becomes the first latino and first immigrant to lead the Department.

According to the International Organization for Migration, thousands of migrants from Honduras — fleeing violence, devastation caused in the aftermath of two devastating hurricanes and economic hardships due to the COVID-19 pandemic — were in Guatemala and moving towards Mexico, hoping to ultimately reach the U.S. Something similar occurred in 2019 and immigration authorities at the border were overwhelmed by the influx of migrant families fleeing dangerous conditions in Central America’s Northern Triangle: Guatemala, Honduras and El Salvador.

Depending on how this situation develops, it may turn into one of the earlier immigration issues the Biden administration faces.

After his confirmation hearing, Missouri Sen. Josh Hawley opposed fast tracking Mayorkas out of the committee, citing concerns about his immigration policies.

The department also faces a national security threat in homegrown domestic extremists — an issue Mayorkas vowed to combat at his confirmation hearing.

“The threat of domestic extremism is one of the greatest challenges that the Department of Homeland Security confronts,” Mayorkas said at the hearing, while also calling the Jan. 6 attack at the U.S. Capitol “horrifying.”

Mayorkas is also tasked with helping secure the nation’s cyber security after a massive breach by Russia into “less than 10” government agencies.

“I can assure you that the cybersecurity of our nation will be one of my highest priorities because I concur with you that the threat is real,” he said. “And the threat is every day and we have to do a much better job than we are doing now.”

During his Senate confirmation hearing, Mayorkas was also asked about a federal watchdog report from 2015 in which he was accused of improperly meddling with visa applications for wealthy business people. U.S. Citizenship and Immigration Services employees cited in the report said the then-deputy homeland security secretary was in touch with applicants outside of normal channels.

The Department of Homeland Security Office of Inspector General review, which relies on accounts from more than a dozen Homeland Security employees, found that Mayorkas’ actions “created an appearance of favoritism and special access.”

In response, Mayorkas said senators and House members asked for his intervention and he maintained that his involvement was aimed at improving the applications process.

He pointed out his involvement in “dozens and dozens” more cases beyond the those mentioned in the report. The inspector general was tasked with reviewing just three of the thousands of high-profile visas issued each year and did not conclude that anything improper occurred in the handling of the applications.