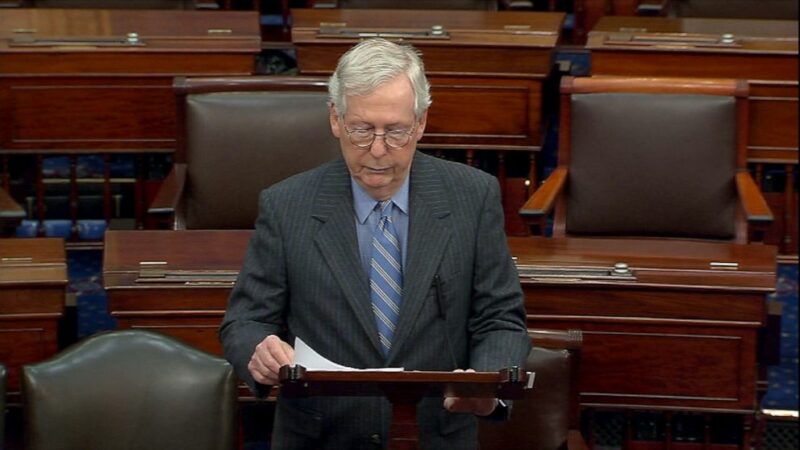 (WASHINGTON) — For the first time this Congress, the Senate started debating voting rights legislation on Tuesday, a day after Democrats failed to meet their hopeful, symbolic, deadline to pass an election reform bill by Martin Luther King Jr. Day.

But Democrats need 60 votes, or the support of 10 Republican senators — which they don’t have — plus all 50 of their own, to overcome a GOP filibuster on the legislation and end debate, making way for the bill’s final passage. All 50 Senate Republicans are opposed to the bill.

“The American people deserve to see their senators go on record on whether they will support these bills or oppose them. Indeed, that may be the only way to make progress on this issue,” Schumer said on Tuesday. “And if Republicans choose to continue to filibuster voting rights legislation, we must consider and vote on rule changes that are appropriate and necessary to restore the Senate and make voting legislation possible.”

The bill at hand would make Election Day a federal holiday, expand early voting and mail-in-voting, and give the federal government greater oversight over state elections. And would come at a time when nearly 20 states have restricted access to voting fueled by false claims in the wake of the 2020 election, according to the Brennan Center for Justice.

Quoting the late civil rights leader Dr. Martin Luther King Jr., Schumer acknowledged that Democrats have “an uphill struggle” to pass voting rights legislation but said they should “keep moving, keep fighting” in the face of the inevitable defeat this week.

“Win, lose, or draw — members of this chamber were elected to debate and to vote, especially on an issue this vital to the beating heart of our democracy as voting rights. And the public — the public is entitled to know where each senator stands on an issue so sacrosanct as defending our democracy.”

He also seized the spotlight to slam Republicans for continuing to block Democrats from passing the legislation last year, and addressing the American people from the Senate floor, said the GOP has “regressed.”

McConnell, on Tuesday, speaking first for Republicans, slammed his colleagues across the aisle for characterizing the Senate filibuster as a “Jim Crow relic” while, Democrats argue, the procedural tactic is being weaponized by Republicans to prevent federal voting protections largely to minorities.

“This is about one party wanting the power to unilaterally rewrite the rulebook of American elections,” McConnell said.

“Democrats have been pushing the same policy changes in the same Chicken Little rhetoric since 2019,” he added. “The Democratic leader’s effort to break the Senate long predates the latest pretext.”

“Too many of our colleagues across the aisle still want to respond to a 50-50 Senate with a rule-breaking power grab. Those voting to break this institution will not be a free vote or a harmless action, even if efforts fail,” McConnell continued. “An unprincipled attempt at grabbing power is not harmless just because it fails. Voting to break the Senate is not cost-free, just because of a bipartisan majority of your colleagues have the wisdom to stop you.”

To go it alone, Schumer said he will move to challenge the chamber’s filibuster rule with a simple majority vote, and aides say that rules-change proposal will come as early as Wednesday. Schumer on Tuesday also filed cloture on the bill, setting up the 60-vote threshold filibuster vote for later this week.

It’s still unclear exactly how Democrats intend to change the filibuster rule. Schumer didn’t lay out specifics Tuesday on what his plans are on possible changes to the filibuster when Republicans block the voting rights bill as they’re expected to do.

Senate Democrats are scheduled to meet Tuesday evening ahead of an expected vote Wednesday to try to change the filibuster rule.

Sen Tim Kaine, D-Va., a key negotiator in voting rights talks., told ABC News last week that it will likely amount to a one-time change to the rule, or carveout, by lowering the threshold to end debate on the legislation from 60 votes to 51 votes. In theory, Vice President Kamala Harris, as president of the Senate, could serve as Democrats’ tie-breaking vote — both to quash the filibuster and, eventually, pass the voting rights bill.

Another option Democrats have looked into is reverting back to a talking filibuster, which would require 41 opponents of the bill to keep talking on the floor — called “holding the floor” — to test the opposition’s stamina. If they run out of steam, there would be a 51-vote requirement for passage of the once-filibustered bill.

But Democrats need the support of their entire party to change the rule in the chamber where they hold the slimmest of majorities. And conservative Democratic Sens. Joe Manchin and Kyrsten Sinema have made clear their opposition to changing the filibuster, even though both support the underlying legislation, so the effort is expected to fail — a massive blow to Democrats as President Joe Biden approaches one year in office on Thursday.

Martin Luther King Jr.’s 13-year-old granddaughter, Yolanda Renee King, called out Manchin and Sinema by name in demonstrations near Capitol Hill on Monday as activists took the street to demand action in the name of the late civil rights leader being honored across the nation.

“Sen. Sinema, Sen. Manchin, our future hinges on your decision, and history will remember what choice you make,” she called out. “So join me in demanding action for today, tomorrow and generations to come.”

After Biden took the national spotlight last Tuesday in Georgia to demand the Senate change its rules “whichever way they need to be changed to prevent a minority of senators from blocking actions on voting rights,” he met with Sinema and Manchin privately at the White House. As he headed to the Hill last Thursday to meet with lawmakers, Sinema stunningly took to the Senate floor and reiterated her opposition to what the president had just publicly called for.

Republicans, meanwhile, have argued Biden went too far in his attacks on the GOP, tying their obstruction on the bill to Jim Crow-era racism, with Minority Leader Mitch McConnell slamming Biden’s speech from the Senate chamber as “profoundly, profoundly un-presidential” and as a “rant” that was “incoherent, incorrect and beneath his office.”

As activists continue to push for federal action, Sen. Mitt Romney, R-Utah, said over the weekend he was never contacted by the White House to try and gain support for passing voting rights legislation.

“Sadly, this election reform bill that the president has been pushing, I never got a call on that from the White House. There was no negotiation, bringing the Republicans and Democrats together to try to come up with something that would meet bipartisan interest,” he told NBC’s “Meet The Press” Sunday.

With the Senate finally taking up voting rights Tuesday, the president is scheduled to remain out of sight, according to his schedule, but at the White House for briefings.

Biden is scheduled to hold a news conference on Wednesday, one day before marking his first year in office, where he’ll likely face questions on the issue of voting rights — among other unfinished agenda items.