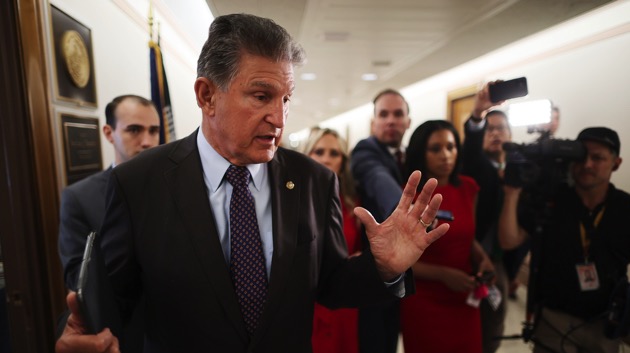 Sources tell ABC News Manchin detailed his concerns privately to colleagues and others on Capitol Hill in recent months.

The private discussions further highlight the stark disagreements between the conservative Democrat and most of his party over a popular program the White House has touted as one of President Joe Biden’s major accomplishments with a Democratically-controlled Congress.

On a Sunday Fox News appearance, Manchin signaled opposition to the White House’s $1.75 trillion social policy plan as currently written, effectively ending negotiations over the House-passed bill that Democrats had initially hoped to get signed into law before Christmas.

That proposal included an extension to the Child Tax Credit program — which will likely lapse in January after the last payments on Dec. 15 — along with paid family leave, an expansion of Obamacare coverage and funding for education and combating climate change.

“I cannot vote to move forward on this mammoth piece of legislation,” he said in a statement Sunday. “My Democratic colleagues in Washington are determined to dramatically reshape our society in a way that leaves our country even more vulnerable to the threats we face. I cannot take that risk with a staggering debt of more than $29 trillion and inflation taxes that are real and harmful to every hard-working American at the gasoline pumps, grocery stores and utility bills with no end in sight.”

In a response from the White House, press secretary Jen Psaki accused Manchin of backtracking in negotiations with the president after submitting to Biden last week a potential framework for the social policy and spending plan.

“Senator Manchin promised to continue conversations in the days ahead and to work with us to reach that common ground. If his comments on Fox and written statement indicate an end to that effort, they represent a sudden and inexplicable reversal in his position, and a breach of his commitments to the president and the senator’s colleagues in the House and Senate,” Psaki said.

In private conversations, Manchin also said he believed paid family leave would be exploited by Americans to go hunting during deer season — particularly in his home state of West Virginia, according to two separate sources familiar with the comments. Both remarks were first reported by the Huffington Post.

Those who heard these comments firsthand expressed outrage and discomfort over them to ABC News.

“Senator Manchin has made clear he supports the Child Tax Credit and believes the money should be targeted to those who need it most. He has also expressed support for a paid leave program that has a dedicated, sustainable funding mechanism,” a spokeswoman for Manchin’s office told ABC News.

Biden and Manchin spoke Sunday after Manchin’s remarks on Fox News, according to two sources familiar with what was described as a cordial conversation.

The White House and Manchin’s office declined to comment.