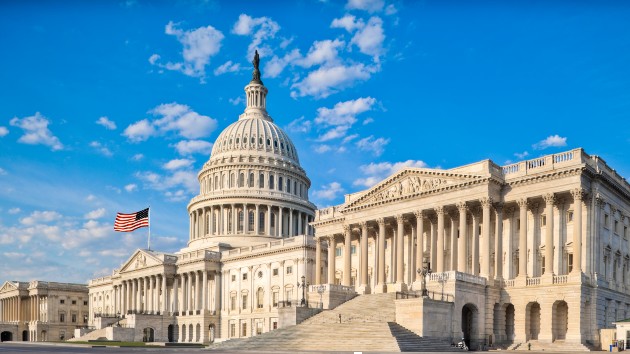 (WASHINGTON) — A bipartisan Senate investigation of the deadly Jan. 6 insurrection found security and intelligence failures at every level of government that led to the breach of the Capitol by a pro-Trump mob as lawmakers in a joint session were certifying the 2020 election.

The 95-page report, a product of a roughly five-month, joint probe by the Senate Homeland Security and Rules Committees, found significant breakdowns ranging “from federal intelligence agencies failing to warn of a potential for violence to a lack of planning and preparation by (U.S. Capitol Police) and law enforcement leadership.” There was no overall operational or staffing plan for that fateful day, a total failure of leadership, according to the committees.

“We do know there were significant, widespread and unacceptable breakdowns in the intelligence gathering and security preparations and emergency response during the attack,” said Sen. Gary Peters, who chairs the Homeland Security panel, calling it “an important start.”

“The attack was, quite frankly, planned in plain sight,” Peters, D-Mich., said.

“We had some differences along the way,” said Sen. Rob Portman, the top Republican on the Rules panel. “The goal is to let the American people know, know what the security and intelligence failures were in the days leading up to Jan. 6 and also on Jan. 6. Capitol Police were put in an impossible situation. They didn’t have the tools they needed to protect the Capitol. And that’s just the hard truth that you’ll see clearly outlined in our report.”

Despite numerous warnings on social media of potential violence, law enforcement failed to recognize the serious potential for violence, and specifically, an intelligence unit inside the Capitol Police (USCP) knew of the gravity of the threat but failed to share that assessment widely, leaving rank-and-file officers vulnerable, according to investigators.

That Capitol Police intelligence arm, known as the “Intelligence and Interagency Coordination Division” (IICD), “knew from online posts of a plot to breach the Capitol and posts that contained Capitol Complex maps of the tunnel systems, yet did not convey the full scope of known information to USCP leadership, rank-and-file officers, or law enforcement partners,” according to the report.

“This was not a failure of the front-line officers. This was a failure of leadership,” said Senate Rules Committee Chair Amy Klobuchar, calling those failures “obvious.”

“This can never happen to our country again,” said Klobuchar, D-Minn.

The scope of the report is exceedingly narrow — primarily focusing on what happened on the day of the attacks — not the root cause of that violent day, a delicate topic for some Republicans who have sought to avoid addressing any role that former President Donald Trump may have played in inciting the attack.

The House impeached Trump on charges of inciting an insurrection following the attack; he was later acquitted by the Senate.

The report mentions Trump’s name 44 times, including footnotes, but it does not ascribe any blame for the insurrection, nor does it use that term, something committee aides said was intentional.

“Certainly the language that was chosen was purposeful,” said one committee aide for the minority, indicating that there was not a consensus on using “insurrection.”

“Our report is limited in scope. It is specifically focused on the security planning and response failures that allowed the attack to occur,” Peters said. “That’s why I believe a commission is absolutely essential — that there is no way that this report is in any way comprehensive in the way that it should. The American people deserve to get those answers. They should get it from an independent, trusted investigation.”

Republicans last week blocked the creation of an independent bipartisan commission, but Senate Majority Leader Chuck Schumer has held out the possibility that senators may vote again on creating the panel.

Sen. Roy Blunt, the top Republican on the Rules Committee, who opposed the creation of a commission and actively lobbied colleagues against it, countered, saying that any commission would not now have access to the perpetrators of the attacks, 465 of whom have been arrested in relation to the attack and 130 of whom have been charged, according to the Department of Justice.

“I don’t know how we would have really identified or talked to the people that will soon be available once the Justice Department process works through its way,” Blunt, R-Mo., said.

Federal prosecutors have described their aggressive efforts to pursue those linked to the Capitol attack as one of the largest criminal investigations in the history of the department.

While the report closes out the joint investigation, lawmakers noted that they intend to pursue a host of unanswered questions. Of top concern is the lack of cooperation, the senators claim, from the Department of Justice and the Department of Homeland Security.

“I’m disappointed that we still do not have an adequate response from the Department of Homeland Security and the FBI about those intelligence failures,” Peters said, noting that he would continue to press those agencies for more information.

Klobuchar and Blunt announced that their panel will, next week, examine a list of 65 recommendations made in a scathing report on the Jan. 6 attacks by the Capitol Police Inspector General whose findings mirror the senators’ probe.

The bipartisan Senate investigation issued 20 recommendations of its own including selection of a new Capitol Police chief and the creation of a new intelligence director to lead a consolidated and upgraded bureau within the department.

“I think this report clearly detailed all of our collective concerns about the leadership of the Capitol Police and not the individual officers,” Klobuchar said, though she noted that the Jan. 6 failures “were not all on the Capitol Police.”

The new chief, the report says, should be given the power to directly request National Guard assistance in emergencies, something lawmakers intend to address immediately in legislation.

The existing system, which requires the chief to maneuver a cumbersome process involving the Defense Department chain of command to make emergency requests, led to staggering delays in the arrival of aid when the riots kicked off, the report finds. It took more than three hours for the D.C. National Guard to be deployed that day.

Capitol Police officers must also be trained and equipped appropriately, a major downfall during the riots that saw law enforcement officers in regular duty uniforms with little to no riot gear, leaving them vulnerable to the unruly mob wielding dangerous weapons, including pipes, fire extinguishers, tasers and more, the investigation found.

Problems at the Pentagon

A cascading series of problems and delays involving the Defense Department are outlined in the report with some new detail and reaction from former Trump officials who were interviewed by investigators behind closed doors.

Despite reporting that Trump may have been involved in delaying the call-up of the D.C. National Guard, a committee aide said, “We found no evidence of feet-dragging,” adding, “There was no communication between President Trump and the Defense Department.”

The acting secretary of defense at the time, Chris Miller, who was interviewed by the committee behind closed doors, indicated he “had all the authority he needed to and Trump concurred,” according to a panel aide.

William Walker, the commanding general of the D.C. National Guard, testified last March that he had troops ready to deploy immediately to the Capitol, but that approval from the Pentagon was delayed for more than three hours. DOD officials “disputed that characterization” and said that Walker’s request “simply memorialized longstanding policy. Christopher Miller, the Acting Secretary of Defense on January 6, was not aware that General William Walker wanted to deploy the (Guard’s Quick Response Force) on January 6.”

Further, the report states, “According to Army officials, however, the requests were not specific and clarity on the scope of the request was needed.”

Adding to the delay in response from the Pentagon, investigators found that DOD officials were concerned about “criticism it received about its response to the civil unrest after the murder of George Floyd during the summer of 2020.” When protests erupted in Washington following Floyd’s killing by a Minneapolis police officer, there was a heavy response from the DOD, including the use of military helicopters to buzz protestors.

“DOD officials cited lessons learned from the summer 2020 as guiding its decision-making for January 6,” the probe found. “Officials believed it needed ‘control measures’ and ‘rigor’ before deploying (National Guard) personnel, including a clear deployment plan to avoid the appearance of overmilitarization.”

“Inaccurate media reports” about DOD refusing a request for the deployment of the D.C. National Guard also created problems, the committees found. “At 2:55 p.m., a reporter tweeted that DOD ‘had just denied a request by D.C. officials to deploy the National Guard to the US Capitol,’ despite the fact that no denial had been ordered and senior DOD officials were still analyzing the request,” according to the report.

Miller then approved the mobilization at 3:04 p.m., but because of the confusion caused by the tweet, Army Secretary Ryan McCarthy “spent at least half an hour fielding calls and reassuring Congressional and local leaders that DOD ‘was indeed coming,"” the report says.

Klobuchar described the Guard — mobilizing from all across the country — for “a Super Bowl-sized event” but not knowing one another, it was “more like a game of pick up.”

The two panels also found intelligence failures at every level.

“Despite online calls for violence at the Capitol, neither the FBI nor DHS issued a threat assessment or intelligence bulletin warning law enforcement entities in the National Capital Region of the potential for violence. FBI and DHS officials stressed the difficulty in discerning constitutionally protected free speech versus actionable, credible threats of violence,” the report notes.

In response to the report, the U.S. Capitol Police wrote that they rely on intelligence, and that no intelligence products leading up to that day indicated that the Capitol would face such severe threats.

“Neither the USCP, nor the FBI, U.S. Secret Service, Metropolitan Police or our other law enforcement partners knew thousands of rioters were planning to attack the U.S. Capitol,” the statement reads. “The known intelligence simply didn’t support that conclusion.”

But the report notes that the lead intelligence office inside USCP — one of three — “failed to convey the full scope of threat information they possessed,” and as a result, the committees say, “critical information regarding threats of violence was not shared with USCP’s own officers and other law enforcement partners.”

According to the report, one intelligence product issued by a subset of the USCP on Jan. 3 warned of a “sense of desperation and disappointment” in protesters that “may lead to more of an incentive to become violent.”

But those warnings weren’t reflected in later intelligence materials. The report finds that this warning “does not appear to have informed other key decision makers’ perspectives.”

The committees also want to see U.S. intelligence agencies reevaluate their assessment criteria and establish “standing concept of operation” scenarios in an attempt to improve the Pentagon and D.C. National Guard’s response to terrorism incidents, including a clear plan for “command-and-control during the response.”

Congress still has work to do to fortify the Capitol grounds and the buildings on the campus. In May, the House narrowly passed $1.9 billion in emergency funding, but the Senate has yet to act on that measure. Portman and Klobuchar said they hoped their report would inform the appropriations process in that chamber.

“January 6, 2021 marked not only an attack on the Capitol Building — it marked an attack on democracy,” the report states. “The entities responsible for securing and protecting the Capitol Complex and everyone onsite that day were not prepared for a large-scale attack, despite being aware of the potential for violence targeting the Capitol. The Committees’ investigation to-date makes clear that reforms to USCP and the Capitol Police Board are necessary to ensure events like January 6 are never repeated.”