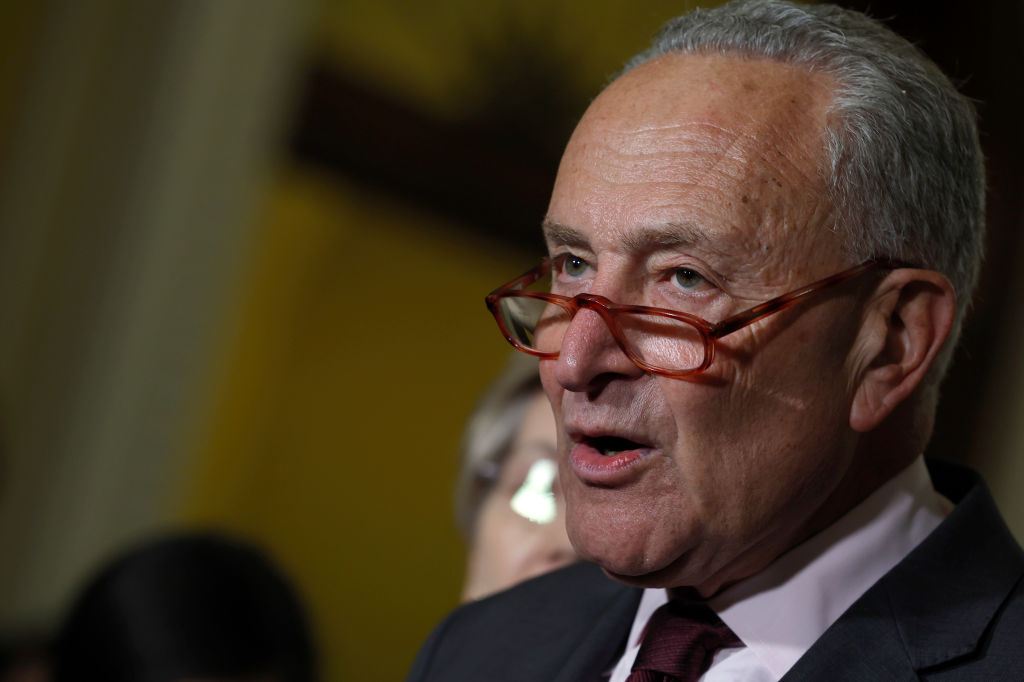 Democrats are concerned that the Supreme Court’s decision to overturn Roe v. Wade may pave the way for same-sex marriage, contraception and other privacy rights to be dismantled.

“Let’s remember why a vote on the Respect for Marriage [Act] is necessary,” Schumer said. “Millions upon millions of American women had their right taken away by the extremist MAGA Supreme Court in the Dobbs decision. And in a concurring opinion Justice Thomas opened the door for the Supreme Court going even further.”

“When some Republicans say the vote is unnecessary, it won’t happen — they said the same thing about Roe,” Schumer continued.

Democrats want to pass the bill quickly, Schumer said, and would prefer to do so in a stand-alone vote. But they would need at least 10 Republicans to back the bill in order for it to overcome the filibuster and pass.

Sen. Tammy Baldwin, D-Wis., and Sen. Susan Collins, R-Maine, are working with Republicans to shore up enough votes. The two recently penned an op-ed in The Washington Post telling their colleagues it’s time to “get the job done.”

“But let me be clear, a vote will happen,” Schumer told reporters Wednesday. “A vote on marriage equality will happen on the Senate floor in the coming weeks and I hope there will be 10 Republicans to support it.”

Democrats were considering a riskier option to codify same-sex and interracial marriage by attaching the bill to a must-pass continuing resolution to keep the government open past Sept. 30, an aide familiar with the matter told ABC News on Tuesday. But Schumer and other Democrats appeared to change course on Wednesday.

Sen. Mitch McConnell, R-Ky., said Wednesday that the government funding bill should be as “clean as possible” in order to move forward without controversy.

Baldwin and Collins also said they prefer the stand-alone bill route, and are currently working on an amendment to appease Republican concerns about the legislation.

“We’re looking at an amendment that would strengthen the language in the bill to make crystal clear that it does not in any way infringe upon religious liberties, and it also would correct a drafting error in one part of the bill that makes very clear that marriage is between two individuals,” said Collins, adding that some Republicans have expressed concern that the bill might lead to “polygamous marriage” though that is not allowed in any state in the country.

Asked if she were confident she had the support of 10 Republicans, Collins said, “I’m never confident until the role is called, but we’re making good progress. There’s a lot of sincere interest, but obviously people want to see the amendment and have input into the amendment.”

The Respect for Marriage Act passed the House in a bipartisan vote of 267 to 157 in July. Forty-seven Republicans joined Democrats to support the bill.

The legislation repeals the Defense of Marriage Act and replaces provisions that define, for purposes of federal law, “marriage” as between a man and a woman. It also provides additional legal protection for same-sex or interracial couples.

House Speaker Nancy Pelosi, D-Calif., at the time called the bill’s passage “another step to defend freedom for the American people.”