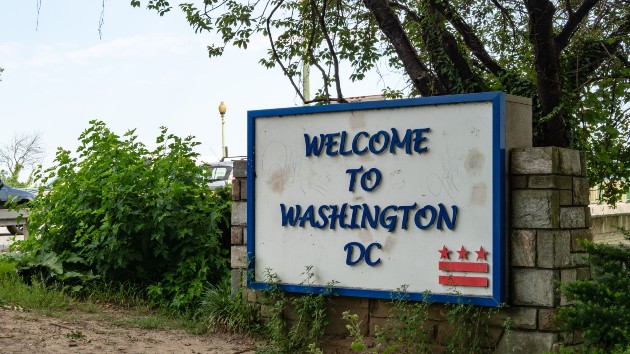 (WASHINGTON) — Democratic lawmakers took to the Senate floor Tuesday to argue in favor of statehood days after nearly 40 legal scholars sent a letter to congressional leadership outlining the constitutionality of the District of Columbia becoming the 51st state.

Sen. Tom Carper, D-Del., who has led the charge for the district’s statehood in the Senate, said the issue should transcend the political divide as it is one of “basic fairness and equality.”

“The reality is that these citizens pay the most — get this, get this — the citizens of the District of Columbia pay the most in per capita federal income taxes in the U.S., more than any other state, but they have no say in how those dollars are spent. None,” Carper said Tuesday. “The second-class status must come to an end.”

Sen. Cory Booker, D-N.J., argued that the district’s statehood is also a civil rights issue given the demographics of the district.

“D.C. is a majority-minority city and the people of the city deserve the same opportunity that other less-populated states have to make their voices heard in Congress,” Booker said.

The House approved a bill that would admit the district as a state in late April, but much of the debate in the Senate has centered around the constitutionality of admitting it as a state. Some lawmakers argued it would require a constitutional amendment and others have said the district could not become a state at all given the requirements that the seats of federal government not be in any state at all.

Thirty-nine legal scholars from across the U.S. penned a letter to congressional leaders on Saturday in an attempt to dispel the arguments about why the district’s statehood might be unconstitutional.

Caroline Fredrickson, a distinguished visitor at Georgetown Law School, said the letter came after she spoke with another legal scholar who wanted to “set the record straight.”

“Well, there were a number of members of Congress that had, I think, sort of irresponsibly suggested that the D.C. statehood legislation was not constitutional, that there would be a requirement of a constitutional amendment to add D.C.,” Fredrickson told ABC News.

The letter, Fredrickson said, illustrates a “slam dunk” in terms of the constitutionality of admitting the district as a state. It argues that Congress has the authority to admit new states and that it doesn’t have to be admitted through constitutional amendment.

The letter also suggests that the district clause in the Constitution, which requires a federal district with the Capitol that is not part of any state, does not have to be the current size it is now. Instead, the scholars wrote, the federal district could be a small area including the White House, Capitol Hill and a few other federal buildings, while the rest of the area could become the 51st state, which would be named Washington, Douglass Commonwealth.

Del. Eleanor Holmes Norton, who represents the District of Columbia as a nonvoting member of Congress, told ABC News she thinks the letter could help convince undecided lawmakers to sign onto the bill.

“I thought that the analysis was particularly helpful because it did not hedge. It said none of the critics’ objections to the admission of the district as a state were meritorious, none of them were meritorious,” Holmes Norton said. “And the analysis of these constitutional law professors from all over the United States, all recognized from their top law schools is likely to carry some … weight with people in Congress who are wondering what to do about D.C. statehood.”

Holmes Norton said that she spoke to one senator who has not signed onto the bill, but told her the letter was “very informative.”

She said that the outcome of statehood “will depend on many things” but this analysis could bolster the effort.

“I think it could change outcome in the sense that there are about three or four Democrats now who have not signed on to the bill,” Holmes Norton said. “And I think this kind of straightforward, readable constitutional analysis could change their vote.”

Proponents of statehood argue that the more than 700,000 residents of the District of Columbia are left disenfranchised. “Taxation without representation,” is the rally cry that even appears on district-issued license plates because voters in the district can only elect nonvoting representatives in Congress.

“People should understand how clear cut this the constitutional question is and then they can come to the issue with fresh eyes and figure out whether they think it’s a bad idea for the country, it’s bad policy,” Fredrickson said. “But let’s not pretend that has anything to do with this legislation being unconstitutional.”

In his floor speech Tuesday afternoon, Carper also took issue with the federal oversight of policy in the city, where legislation passed by the council must be reviewed by Congress before it can become law. For example, he said earlier this year a senator from Utah tried to block a proposal — approved by the city council in October — to allow teens to get vaccines without parental consent.

Sen. Chris Van Hollen, D-Md., argued that America is quick to criticize foreign countries for rights violations and the global standing of the nation relies on it focusing on human rights at home.

“When it comes to the representation for the people of the District of Columbia, we have violated their basic rights. We are the only country in the world where citizens of their capital do not have the opportunity to vote for representatives in the national legislature,” Van Hollen said. “That’s not a distinction that we want to have.”