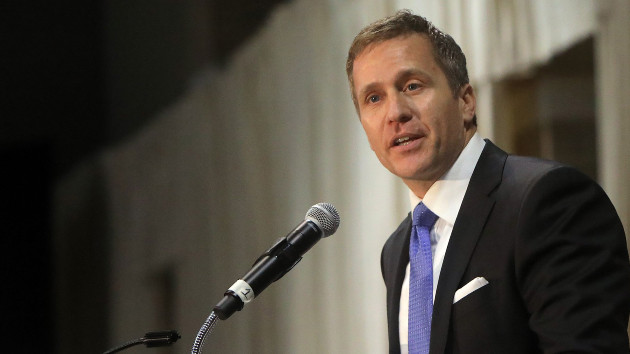 “I think now the people of Missouri need a fighter in the United States Senate and they need somebody who’s going to go — as I will, as I am committed to do, to defending President Trump’s America first policies and also to protecting the people of Missouri from Joe Biden, Nancy Pelosi and Chuck Schumer’s radical leftist agenda,” Greitens told Fox News host Bret Baier.

Greitens resigned in June 2018 amid allegations of sexual misconduct and blackmail after he allegedly had an affair with a hairdresser and performed sexual activities without her consent.

He and his campaign were also investigated by the Missouri Ethics Commission for allegedly misreporting campaign funds and misuse of donor lists, although he personally was ultimately cleared of wrongdoing in that case. However, the case ended with his campaign being fined $178,000 at the end of one of the largest investigations conducted by the commission, it said.

Greitens addressed his resignation on Fox News Monday night. He falsely said that he was fully exonerated when it came to allegations of sexual misconduct.

“We resigned because at the time it was what I needed to do for the people who I love the most. It was one of the hardest things I’ve ever had to do because I knew that all these accusations were false,” Greitens said.

Greitens was set to face trial on a charge of invasion of privacy, but it was dropped after his resignation. A special Republican-led state House panel found the hairdresser in question to be a credible witness.

After her testimony, Sen. Josh Hawley, who was serving as Missouri’s attorney general at the time, called on Greitens to resign immediately. When asked by McClatchy on Tuesday afternoon if he still stands by that statement, he said he did.

“I know as a Navy seal you can lose the battle but still stay in the war. The fact is, right now the people of Missouri need a fighter. They need somebody who’s willing to stand up and fight for them. That is when I’ve done my entire life and that’s what I’m going to continue to do for them in the United States Senate,” Greitens said Monday.