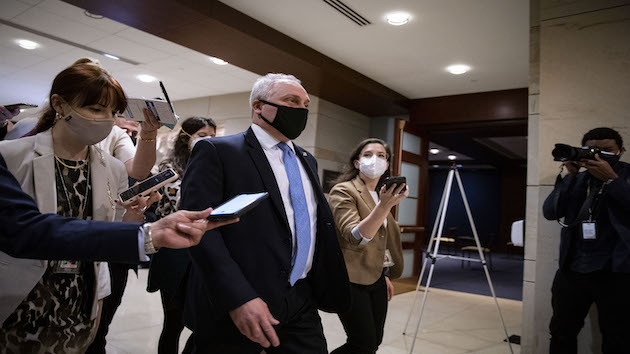 (WASHINGTON) — President Joe Biden is the legitimate winner of the November election now that electoral votes have been counted, House Minority Whip Steve Scalise, R-La., said Sunday on ABC’s “This Week,” but he would not say the election wasn’t “stolen.”

After serving as president for just over a month and despite the fact that over 60 lawsuits were litigated and almost entirely thrown out by courts across the country, Scalise did not concede on the legitimacy of the election after being asked by ABC Chief Washington Correspondent Jonathan Karl.

“Look, Joe Biden is the president,” Scalise said. “There were a few states that did not follow their state laws, that’s really the dispute that you’ve seen continue on.”

Karl challenged Scalise on the extent of Biden’s win.

“I know Joe Biden is the president. He lives at the White House. I asked you, is he the legitimate president of the United States and can you concede that this election was not stolen,” Karl asked. “Very simple question. Please just answer it.”

“Once the electors are counted, yes he’s the legitimate president. But if you’re going to ignore the fact that there were states that did not follow their own state legislatively set laws. That’s the issue at heart, that millions of people still are not happy with and don’t want to see happen again,” Scalise said.

Karl also asked Scalise about his recent trip to visit former President Donald Trump at Mar-a-Lago and pressed him on whether he asked the former president to take responsibility for the violence at the U.S. Capitol on Jan. 6.

“Well, Jonathan, I was in Florida doing some fundraising throughout a number of parts of Florida — ended up at Mar-a-Lago. The president reached out, we visited — I hadn’t seen him since he left the White House. It was good to catch up with him. He was a lot more relaxed than his four years in the White House,” he said.

Scalise refused to say explicitly whether Trump should accept any of the blame.

“I wrote a Wall Street Journal editorial about where I think the responsibility lies for January 6th,” Scalise said. “And surely there’s a lot of blame to go around but at the end of the day, the people who were in the Capitol on the 6th of January, they need to be held accountable. In fact, over 180 have already been arrested.”

“President Trump has denounced what happened. And I think everybody should have been equivocal in their denouncing of what happened, not only on Jan. 6, but during the summer when they were burning down cities, shooting cops, beating people in the streets,” he added.

Karl also pushed Scalise on his stance on reopening schools and using additional coronavirus relief funds to do so.

“But if you look at what the priority should be — it should be the children — and that’s not the case because right now you can see as the unions have stepped up and said that they don’t want in-classroom learning,” Scalise said. “They need to be in the classroom today, the science says they can be in the classroom today. The question is, is the will there for some politicians in Washington who are bowing to the teachers unions right now?”

Biden’s plan to return students to school with another coronavirus relief package — which would provide additional money to state and local governments — is unnecessary, Scalise told Karl, pointing to unused funds from previously passed relief bills.

Karl pushed Scalise on his view of the federal government’s role when it comes to making a decision about when children should return to schools.

“Congressman, the White House is not mandating that the states do anything on this. They have issued guidance from the CDC. Are you suggesting that the president should be effectively ordering local school districts to reopen?” Karl asked.

“Right, I strongly agree that education should be run at the local school system,” Scalise said. “But what what Jen Psaki just said is, I think, the biggest concern. That is, they’re saying they want to pass over $100 billion of new money that’s not even tied to schools reopening,” he added, responding to the White House press secretary who said in an earlier interview with Karl that the administration had no plans to tie additional coronavirus relief funding to reopening schools.

“Let’s target the money, but this idea that Washington should be giving out $100-plus billion of new money to school and not even requiring them to reopen — that’s an insult to those children who are demanding they go back to school,” he added.

A recent Quinnipiac poll found that 68% of Americans polled said that they support Biden’s $1.9 trillion relief package. Karl pressed Scalise on the congressional GOP’s resistance to passing another package.

“Biden may not have many — any — Republicans in Congress on board. But he must, according to the polling anyway, have a lot of Republicans across the country in favor of what he’s trying to do,” Karl said.

Scalise told Karl that if Americans knew the extent of unspent dollars in relief, they may answer differently.

“Well Jon, you don’t have to be a good pollster from Washington ask the question, ‘Hey would you like the federal government to send you a $3,500 check?’ Of course the answer is going to be yes. If you said, ‘Do you want us to borrow that money from your children?’ because that’s what this is, I think their answer might be a lot (different),” Scalise said.

“And we’re going to pass $1.9 trillion of additional spending to bail out failed states, to raise the minimum wage. What does that have to do with COVID? It should be focused on helping families and small businesses who are struggling, not bankrupting our children by Congress,” he added.