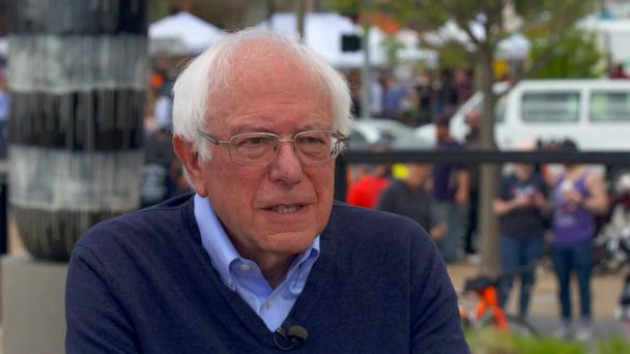 (WASHINGTON) — Senate Budget Committee Chair Bernie Sanders said Sunday that he opposes eliminating the debt ceiling, the financial limit on the federal government that could produce fierce clashes if the GOP wins back one or both chambers of Congress in November’s midterm elections.

“You have to increase the debt ceiling,” Sanders, I-Vt., said on CNN’s State of the Union.

“But you keep it?” anchor Jake Tapper asked him.

Those remarks come as Republicans forecast that they’ll use negotiations over the debt ceiling to extract concessions from Democrats to cut spending — a repeat of battles over the last decade starting with congressional Republicans and President Barack Obama.

Kevin McCarthy, the current House GOP leader who would likely become speaker if the party retakes the chamber, has been advocating for using the debt ceiling to win leverage over Joe Biden’s administration and Democratic lawmakers, with some House Republicans rallying to his side.

“I support that strategy because look, at the end of the day, when COVID-19 happened you had the federal government and state governments literally shut companies down. Businesses had to make tough decisions about how they were going to keep their doors open. The federal government just kept getting record revenue year over year and hasn’t had to make those tough decisions,” Rep. Nancy Mace, R-S.C., said on CNN on Sunday.

Democrats, meanwhile, accuse Republicans of potentially holding the debt ceiling hostage to win over their spending cuts. Forfeiting on the nation’s debts, they say, would amount to an economic calamity given that the government is already legally required to pay out spending that Congress authorizes — and so the debt ceiling should rise as that spending is passed.

President Joe Biden and others in the Democratic caucus have laid out red lines surrounding what they expect will be Republican offers to cut Social Security and Medicare in exchange for GOP votes to raise the debt ceiling.

“What Republicans are basically doing — and I hope everybody understands this — they are saying, ‘Look, we are prepared to let the United States default on its debt, not raise the debt ceiling, unless you talk about making cuts,"” Sanders said on CNN.

But he, like Biden, disagrees with calls to remove the debt ceiling. The president last week called such a move “irresponsible.”

“You know what they’re talking about? Cuts in Social Security, Medicare and Medicaid. Is that irresponsible? It is absolutely irresponsible,” he said on CNN. “You don’t use the debt ceiling to do that.”

He also argued that the party that has been hammering Democrats over inflation and the economy — as polls show voters trust the GOP more on both issues — has no real economic plan of its own.

“What do they want to do, other than complain?” he said.

McCarthy, the House minority leader, has touted a “Commitment to America,” including strengthening the economy. The platform, however, is light on specifics.