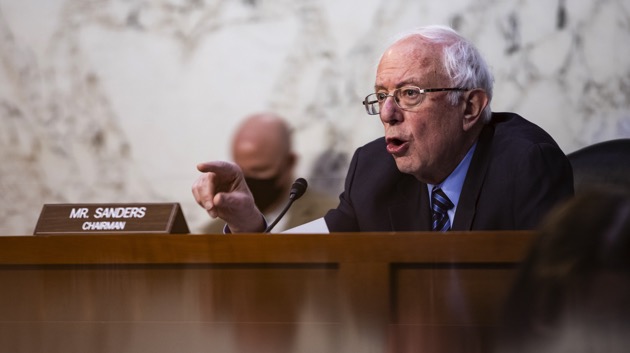 (WASHINGTON) — Sen. Bernie Sanders on Thursday introduced a resolution that would halt a major arms sale to Israel amid its fight with Hamas and the deaths of Palestinian civilians, a high-profile illustration of the significant divide in the Democratic Party, with some members breaking with the historic lock-step support of the Jewish nation by Washington lawmakers of every stripe.

The joint resolution of disapproval, sponsored in the House by Democratic Reps. Alexandria Ocasio-Cortez, D-N.Y., Mark Pocan, D-Wis., and Rashida Tlaib, a Palestinian American from Michigan, would cancel “the proposed transfer of defense articles, defense services, and technical data to support weapons integration, flight test, and hardware delivery of Joint Direct Attack Munition variants and Small Diameter Bomb Increment I variants for end use by the Ministry of Defense for Israel.”

“At a moment when U.S.-made bombs are devastating Gaza, and killing women and children, we cannot simply let another huge arms sale go through without even a Congressional debate,” Sanders, I-Vt., said in a statement about his bill that would stop the arms package totaling $735 million. “I believe that the United States must help lead the way to a peaceful and prosperous future for both Israelis and Palestinians. We need to take a hard look at whether the sale of these weapons is actually helping do that, or whether it is simply fueling conflict.”

Senate Republican Leader Mitch McConnell has blasted any Democratic attempts to blame Israel in any fashion or call for a ceasefire, standing behind the U.S. ally’s fight against Hamas, the terrorist organization that has a stranglehold on the Palestinian territories and governs Gaza.

“We cannot send the signal that terrorist attacks on American allies will be met with mealy-mouthed attempts to blame both sides,” said McConnell, R-Ky.

Under Senate rules, the measure cannot be filibustered and empowers Sanders to force a full floor vote in roughly a week’s time once it has been filed with the Foreign Relations Committee.

Despite that streamlined process and simple majority requirement for passage, the resolution faces a high hurdle in the chamber given the number of Democrats unwilling to challenge a longtime American ally with a politically-potent lobby and support in the U.S.

The legislation does not enjoy a privileged status in the House, so it’s unclear if it would even be considered there where Republicans could pounce on any sign of political daylight between Democrats and Israel, along with its Jewish supporters. It also comes as the Democratic majority is fending off a potent GOP challenge for control of that chamber in the 2022 midterms.

If, by some chance the legislation were to path both houses of Congress, President Joe Biden – who has pressed for a cease-fire in the region — could veto the legislation, and an override would then require a two-thirds majority in both the House and Senate, something the nonpartisan Congressional Research Service says has never happened.