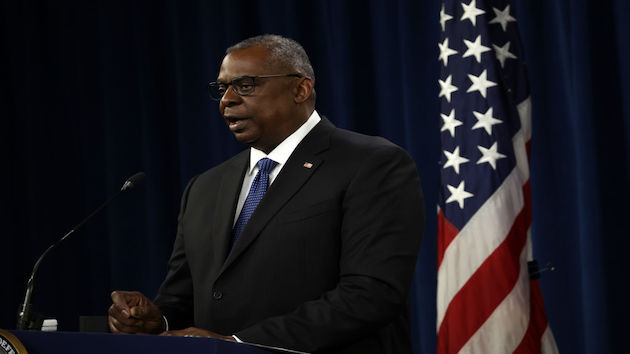 (WASHINGTON) — The Pentagon has been providing daily updates on the Russian invasion and Ukraine’s efforts to resist.

Here are highlights of what defense officials told reporters on Wednesday:

On Tuesday evening, Pentagon press secretary John Kirby dismissed a surprise offer from Poland to send all of its MiG-29 fighter jets to a U.S. air base in Germany “and place them at the disposal” of the U.S. government.

“The prospect of fighter jets ‘at the disposal of the Government of the United States of America’ departing from a U.S./NATO base in Germany to fly into airspace that is contested with Russia over Ukraine raises serious concerns for the entire NATO alliance,” Kirby said in a statement, adding that “we do not believe Poland’s proposal is a tenable one.”

On Wednesday, Defense Secretary Lloyd Austin spoke to his Polish counterpart about the MiG-29 offer, thanking him for Poland’s willingness to help Ukraine, but rejecting the notion of using the U.S. as an intermediary for any aircraft transfer.

“He stressed that we do not support the transfer of additional fighter aircraft to the Ukrainian air force at this time, and therefore have no desire to see them in our custody either,” Kirby said during a press conference at the Pentagon.

“The intelligence community has assessed the transfer of MiG-29s to Ukraine may be mistaken as escalatory and could result in significant Russian reaction that might increase the prospects of military escalation with NATO,” he said.

In addition to that risk, the U.S. believes other forms of military support are more effective.

“We believe the best way to support Ukrainian defense is by providing them the weapons and the systems that they need most to defeat Russian aggression,” Kirby said. “In particular, anti-armor and air defense.”

The U.S. has sent hundreds of millions of dollars worth of military aid into Ukraine, including anti-tank and anti-aircraft weapons such as the Javelin and Stinger systems.

Kirby added that the Ukrainian air force still has several squadrons of “fully mission-capable” aircraft of its own.

“We assess that adding aircraft to the Ukrainian inventory is not likely to significantly change the effectiveness of Ukrainian Air Force relative to Russian capabilities.

While the U.S. has rejected the idea for now, Ukrainian President Volodymyr Zelenskyy has continued to call for more aircraft.

“This is about people’s lives. We ask again: make the decision faster. Don’t throw the responsibility — send us the jets,” Zelenskyy said in a Wednesday speech.

And the skies above Ukraine are not yet dominated by Russia.

On Wednesday morning, the U.K. Ministry of Defense tweeted an intelligence update saying “Ukrainian air defenses appear to have enjoyed considerable success against Russia’s modern combat aircraft, probably preventing them from achieving any degree of control of the air.”

“Although Russian air capabilities are significant, their effectiveness has been limited due to Ukrainian … air-defense systems, surface-to-air missiles, and MANPADS,” Kirby said.

Late on Tuesday evening, U.S. European Command confirmed that two Patriot anti-missile systems already in Europe would be moved to Poland. By Wednesday they had arrived, according to the senior U.S. defense official.

The Patriot systems are capable of detecting and intercepting incoming ballistic missiles.

Russia has now fired more than 710 missiles against Ukraine, with about half launched from within Ukraine using mobile platforms, according to the official.

The U.S. has also seen indications Russia is using “dumb” munitions. meaning ordinance that is not precision-guided. The official said it is not clear if these imprecise weapons are being used as part of the original Russian plan or due to problems with their guided missile targeting process.

“What we see manifested is increasing damage to civilian infrastructure and civilian casualties,” the official said.

Russia has about 90% of its invading combat power still intact, the official said. On Tuesday, the estimate was 95%, but the official emphasized that these numbers are rough estimates, so it doesn’t necessarily mean 5% of Russian forces were taken out of the fight overnight.

The U.S. still sees no indications Putin is trying to gather any more troops in addition to the more than 150,000 originally designated for the invasion, the official said.

Since Tuesday, Russians have further closed in on Kharkiv, gaining about 12 miles ground.

“It’s still heavy, heavy fighting there,” the official said. “We don’t assess that they’ve taken the city by any means.”

The U.S. has not seen any significant Russian movement toward Kyiv or Chernihiv in the last 24 hours, and there is still no sign of an an immanent amphibious assault on Odessa. Ukrainians have mounted a strong resistance in Mariupol, but Russians continue to surround and bombard the city.