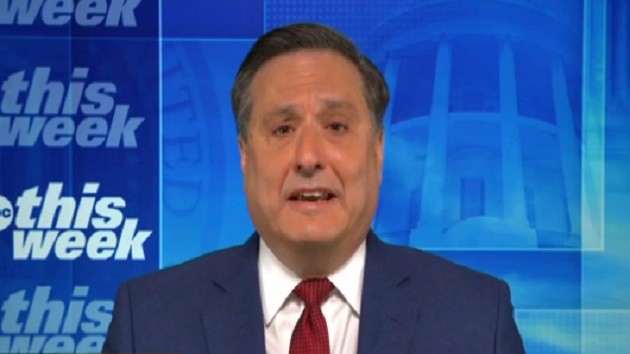 (WASHINGTON) — White House Chief of Staff Ron Klain is warning that Russia’s invasion of Ukraine is “far from over,” despite the claim by Moscow that they are retreating from Kyiv and surrounding areas.

Klain said it’s “for Ukraine to decide” what a post-war country looks like when asked about the possibility that Russia overtakes eastern regions of Ukraine, while Ukraine maintains control of the rest.

“I will tell you, as President Zelenskyy has said, that’s not acceptable to him, and we are going to support him with military aid, with economic aid, with humanitarian aid,” Klain said. “The political future of Ukraine is up for Ukraine to decide.”

“The Ukrainians are winning the war around Kyiv and in the northern part of the country. And that’s tremendous credit to the fighting they’ve done and to the support that the United States that our NATO allies have provided them. We send weapons into Ukraine almost every single day,” Klain responded, dodging the question. “And the Ukrainian military, the Ukrainian volunteers that are fighting this war have shown their bravery, their tenacity, again, backed up by the generosity of the U.S. and our allies.”

While the administration is focused on the crisis overseas, Klain also discussed domestic issues that were at the forefront this week, including inflation, combating rising gas prices and the CDC decision to lift the Title 42 policy at the southern border.

Effects of the war at home

President Joe Biden has blamed Russia for the rise in gas prices at the pump, labeling it the “Putin price hike,” though gas prices were skyrocketing before the holidays last year. However, it’s not just gas prices on the rise; food prices are also up because of inflation, and it’s reflected in Biden’s poll numbers.

“Gas prices are a problem, absolutely, George,” Klain acknowledged. “That’s why the president took the actions he took this week to release a million barrels a day from the Strategic Petroleum Reserve to tell the oil companies they either need to pump oil on the 9,000 permits they have or give them back for others to do that, to increase production here. Those things we think are going to bring down the price of gasoline, relieve some of the pain at the pump. And we also have an agenda to cut taxes for people to bring down the cost of everyday things.”

A new Quinnipiac University poll shows that just 36% approve of the president overall, and only one in three Americans approve of how he’s handling the economy. Republicans are criticizing his economic policies with the midterm election just months away and are poised to exploit it as November gets closer. Stephanopoulos pressed Klain on how Democrats should respond.

“The Republicans have an agenda too. Sen. [Rick] Scott says their agenda is to raise taxes on millions of Americans, to get rid of social security and to do other things that are going to devastate middle class people,” Klain said. “So I think when people compare our agenda to the Republican agenda, that’s gonna be a clear choice for folks.”

When Stephanopoulos inquired about how anxious Klain is about the elections this fall, Klain said the administration has done “a great job,” but there is “work to do.”

“We have done a lot of work to bring the economy back from dead in the water when we got here. Virtually no jobs being created, businesses closed, schools closed,” Klain said, adding that there’s been a “tremendous amount of progress on getting the economy going again in 14 months but a lot of work left to be done.”

The U.S. Bureau of Labor Statistics reported on Friday that 431,000 jobs were added to the economy in March, and the unemployment rate fell to 3.6%.

Austan Goolsbee, Klain’s former colleague in the Obama administration, said the country may be moving toward the idea that the COVID-19 era of the U.S. economy is over with — a sentiment Klain said he “cautiously” agrees with.

Immigration along the U.S.-Mexico border is also looming as a big issue for the midterms, and on Friday, the CDC announced it will end the controversial Title 42 policy, which allowed the government to expel migrants at the border during the COVID-19 pandemic.

The decision is receiving a lot of pushback from Democrats and Republicans. Sen. Joe Manchin called it “frightening,” Sen. Kyrsten Sinema said it poses a threat to Arizona, and Sen. Mitt Romney said it’s going to elect Republicans in November.

“How worried are you about a possible surge at the border?” Stephanopoulos asked Klain. “Is there anything the president can do about it?”

This week, the Department of Homeland Security estimated that up to 18,000 migrants could be apprehended at the border each day if Title 42 were to be lifted, though the administration will keep the Trump-era Migrant Protection Protocols, colloquially known as the “Remain in Mexico” policy, which bars asylum seekers from entering the U.S. while immigration courts review their claims.

“Look, we need to do more work at the border. The president sent an immigration plan to Congress on his first day in office. We’ve asked consistently for more resources. We put in place a new rule that will take effect next month to enable us to process asylum claims more clearly,” Klain said. “We also have to be honest about what’s happening at the border. We have people showing up with asylum claims from places like Cuba, Nicaragua, Venezuela, Brazil, people fleeing regimes where they are feeling persecution.”

Crime in the US

Biden has also repeatedly been attacked by GOP lawmakers for being “soft on crime.” After at least six people were killed in a mass shooting in Sacramento, California, overnight, Stephanopoulos pressed Klain on how Democrats got “on the wrong side of the crime issue.”

Klain responded that he didn’t think Democrats are “on the wrong side.”

“The president has sent to Congress plans for robust funding of police. Congress passed one of them just last week — two weeks ago, in the omnibus bill and raised our funding for police. We want to make sure we have strong law enforcement to respond to crime,” he said. “We also want to make sure we have in place police reform and community violence intervention that help reduce crime. … We’re working very hard to be at the forefront of efforts to both control crime and have balanced and sensible policing. We think we can do both.”

The New York Times reported that as recently as late last year, Biden “confided to his inner circle that he believed former President Donald J. Trump was a threat to democracy and should be prosecuted,” citing two people familiar with the president’s comments. The Times reported that “while the president has never communicated his frustrations directly to Mr. Garland, he has said privately that he wanted Mr. Garland to act less like a ponderous judge and more like a prosecutor who is willing to take decisive action over the events of Jan. 6.”

But Klain told Stephanolopous, “I’ve never heard the president say that we advocate the prosecution of any person,” and he reiterated Biden’s pledge to let the Department of Justice be independent and free of political influence.

“One reason why Joe Biden got elected was he promised that we take the decision over who got prosecuted and what away from the White House and put in the Justice Department,” he said. “Only Richard Nixon and Donald Trump in the modern era believe that prosecution decisions should be made in the Oval Office, not at the Justice Department.”

A federal investigation into Biden’s son, Hunter Biden, over payments he received while serving on the board of directors of Burisma, a Ukrainian natural gas company, and other questions over how Hunter Biden paid off tax obligations in recent years has intensified, sources familiar with the matter told ABC News last week.

Klain said “neither the president or any of us at the White House” have been in contact with the DOJ regarding its investigation and told Stephanopoulos, “Of course the president is confident his son didn’t break the law.”

“That’s a matter that’s going to be decided by the Justice Department, by the legal process,” he said. “It’s something that no one at the White House has involvement in.”

The Washington Post also reported this week on deals that Hunter Biden had with a Chinese energy company, which paid $4.8 million to entities controlled by Hunter Biden and the president’s brother.

“The president is confident that his family did the right thing. But again, I want to just be really clear. These are actions by Hunter and his brother. They’re private matters. They don’t involve the president, and they certainly are something that no one at the White House is involved in.”

Klain would not say if Biden would sign such a bill into law if it reached his desk and refrained from weighing in on whether Justice Thomas should recuse himself from 2020 election-related cases.

The Senate is expected to confirm Judge Ketanji Brown Jackson to the Supreme Court this week.

Missouri GOP Sen. Roy Blunt announced this morning on “This Week” that he would vote against her nomination, leaving Maine Sen. Susan Collins as the only Republican so far to voice her support for Judge Jackson. Klain said she “deserves more Republican votes.”

“What I know is she will get enough votes to get confirmed. In the end I suppose that’s the only thing that matters, but I wish more Republicans would look at the case here, look at the record, and vote to confirm Judge Jackson.”