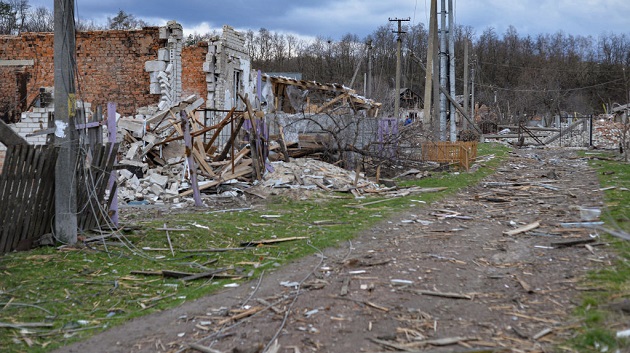 (WASHINGTON) — The Pentagon has been providing daily updates on the U.S. assessment of the Russian invasion of Ukraine and Ukraine’s efforts to fight back.

Here are highlights of what a senior U.S. defense official told reporters Tuesday on Day 48:

Russia could use riot control agents to mask chemical weapons

A defense official said the U.S. cannot confirm whether Russia has used any chemical weapons in Mariupol or elsewhere in Ukraine, but the Defense Department has seen evidence Russia could consider disguising use of chemical weapons by making them look like more benign riot-control agents.

“In the past we’ve had indications that that could be one thing that the Russians look at, is the potential mixing of agents with the with the idea that they could disguise a more serious attack by using the vehicle and the techniques of riot control agents,” the official said.

“These reports, if true, are deeply concerning and reflective of concerns that we have had about Russia’s potential to use a variety of riot control agents, including tear gas mixed with chemical agents, in Ukraine.”

Kirby, like the official on Tuesday, emphasized the U.S. cannot confirm the allegations.

On Tuesday, Kirby told reporters the U.S. is looking into the matter.

“We’re obviously taking it seriously and we’re monitoring it,” Kirby said. “We’re trying to do the best we can to figure out what, if anything, happened.”

The Russian convoy approaching Izuim is still roughly 40 miles to the north of the key Ukrainian city, according to the official.

“We do assess that it’s moving, but not at breakneck speed,” the official said.

While the Pentagon doesn’t have a pristine view of what capabilities make up the convoy, it seems to be support-heavy.

“It includes some command and control elements, some enablers, and we think it’s also intended for resupply, perhaps an effort to amend their poor performance in logistics and sustainment in the north,” the official said.

Heavy fighting continues to the south of Izuim, with Russian forces about 12 miles from the city.

While Russian forces have devastated the coastal city of Mariupol with long-range strikes and have cut off essential supplies to the populace, Ukrainians continue to defend it.

“You’ve seen the devastation that Russian airstrikes have wrought on Mariupol in the city, but our assessment is that the Ukrainians are are still fighting for it,” Kirby said.

Mariupol is strategically important for both the Ukrainians and Russians.

“It’s obvious that the Russians want Mariupol because of its strategic location there at the south of that Donbas area and right on the Sea of Azov,” Kirby said. “It’s a major, important city… it would provide them unfettered and unhindered land access between the Donbas and Crimea.”

Meanwhile, Ukraine has its own clear incentives to keep Mariupol.

“It also has great significance to the Ukrainian people because of what it represents to their economic life, because it is their city and it’s part of their country,” Kirby said. “They haven’t given up on it, and we’re not giving up on them, either.”

The $800 million military aid package for Ukraine authorized by President Joe Biden last month has mostly been delivered, and will be completed in the coming days, according to the official.

“Yesterday, two U.S. flights arrived in the region with everything from small-arms ammunition, machine guns, body armor, grenades and other explosives,” the official said.

While U.S. officials have said Russia has not hit support shipments coming over the border, there is an effort more broadly to disrupt Ukrainian forces’ ability to resupply themselves.

“They certainly have shown an interest in trying to hit logistics and sustainment for the Ukrainians, and they have certainly tried to go after Ukrainian air defense as well,” the official said.