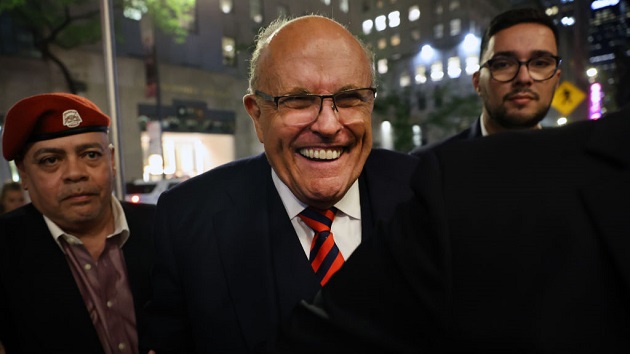 (WASHINGTON) — Former President Donald Trump’s personal attorney, Rudy Giuliani, has been informed that he is considered a “target” of the Georgia criminal investigation probing the effort to overturn the results of the 2020 election in that state, according to sources familiar with the matter.

An attorney for Giuliani received a call Monday informing them that he is a “target” of the investigation, the sources said.

The move comes just two days before Giuliani is set to testify before the Fulton Country special grand jury probing the case, as the investigation appears to be ramping up.

Giuliani is still expected to testify on Wednesday, the sources said.

Last week, an attorney for Giuliani said in court that Giuliani’s legal team had been asked the district attorney “whether or not Mr. Giuliani is a target of this investigation,” but had “not yet received a response.”

The judge in the case, Fulton County Superior Court Judge Robert McBurney, said he “would implore” the DA to “at least address that before [Giuliani] gets here.”

Earlier, 16 so-called “alternate electors” in the state were informed that they are also considered “targets” of the probe.

The House committee investigating the Jan. 6 attack on the U.S. Capitol has said that a plan set up by the Trump campaign in multiple swing states sought to assemble “groups of individuals in key battleground states and got them to call themselves electors, created phony certificates associated with these fake electors and then transmitted these certificates to Washington, and to the Congress, to be counted during the joint session of Congress on January 6th.”

The special grand jury seated in the investigation does not have the ability to return an indictment, and can only make recommendations concerning criminal prosecution.