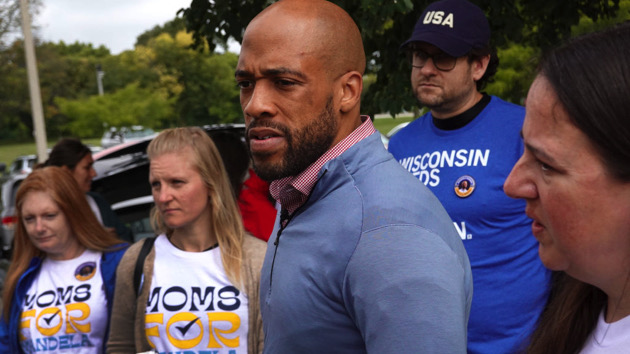 (MILWAUKEE) — The first senatorial debate in the battleground state of Wisconsin is happening Friday evening, with incumbent Republican Ron Johnson facing off against the state’s Lt. Gov. Mandela Barnes, who, if elected, would be the state’s first Black senator.

The debate will be broadcast live from PBS studios in Milwaukee at 8 p.m. ET/7 p.m. local time and is presented by the Wisconsin Broadcasters Association Foundation.

Democrats view the Senate seat in the state as one of the easiest ones to flip, but Republicans’ focus on the issue of crime, along with attack ads on the topic targeting their opponent, have helped tightened the race there, although some Democratic operatives say Republicans’ focus on crime is a distraction from other big issues on voters’ minds, including abortion rights.

A source close to the Barnes campaign said the debates, like the election, will be a referendum on Johnson. Issues that voters can expect to hear Barnes take Johnson to task on will be the Republican senator’s restrictive stance on abortion, past suggestions to end Social Security and Medicare, and Johnson’s ties with his wealthy donors, according to the source.

When asked by ABC News about the first senate debate this Friday, Alec Zimmerman, the communications director for Johnson, wrote in an emailed statement that Barnes is a “dangerous Democrat who has supported radical leftist causes like defunding the police and abolishing ICE.”

Zimmerman adds, “The debate will show what’s at stake in this race: safer communities and an affordable economy — two issues where Mandela Barnes is completely out of touch with Wisconsin families.”

The source close to the Barnes campaign said voters should expect to hear Barnes share his story as the son of a public school teacher and a third-shift auto worker, and how he’ll fight for the middle class.