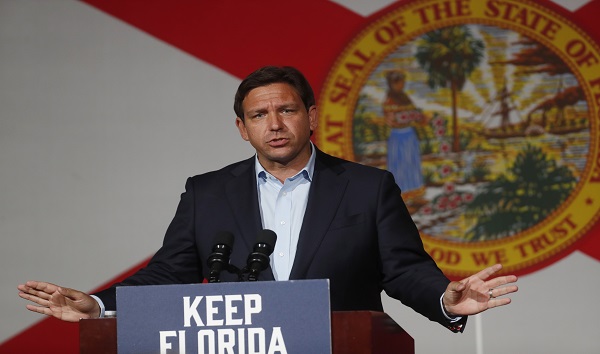 The race for Florida governor was heated in the lead-up to the midterm election season as the incumbent governor, one of the favorites to become the Republican nominee in the 2024 presidential election, sought to remain in the governor’s mansion over an opponent who had lived there before him.

Crist served as Florida’s 44th governor from 2007 to 2011 as a Republican. He did not seek reelection for governor in 2010, instead running for a seat in the Senate. Crist lost to Marco Rubio in the 2010 Senate race.

DeSantis, an aspiring GOP presidential candidate described by President Joe Biden last week as a “Donald Trump incarnate,” would not commit at the pair’s gubernatorial debate that he would serve out a full four-year term if reelected.

“I know that Charlie is interested in talking about 2024 and Joe Biden, but I just want to make things very, very clear,” DeSantis replied after Crist demanded that make plain his future career plans. “The only worn-out old donkey I’m looking to put out to pasture is Charlie Crist.”

Apart from DeSantis’ political aspirations, the sitting and former governors riffed over the state’s abortion laws, COVID-19 mandates and DeSantis’ decision to use tax funds to send migrants to Martha’s Vineyard, a move the governor argued shed light to the “immigration problem” at the southern border.

Crist accused DeSantis of signing a bill that would restrict that abortion rights, even in cases of rape or incest, while DeSantis stated that Crist would have weakened businesses during COVID-19 and allowed for more abortions had he served as governor in the past several years.

Crist also evoked his time as governor during the debate, describing himself as a uniter of people and vowing not to take away Floridian’s ability to access abortion.

The state’s current law bans the procedure after 15 weeks, even in cases of rape and incest, though there are exceptions for the health of the mother and fetal abnormalities. The ban is being reviewed by the courts.

Recent voter registration trends show an uptick of Republican voters in Miami-Dade County, previously considered a Democratic stronghold, The Associated Press reported. Losing Miami-Dade County could eliminate a Democratic path to victory in future statewide elections, according to the AP.