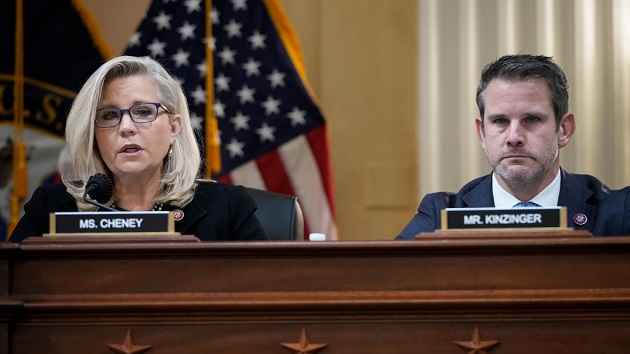 (SALT LAKE CITY) — The Republican National Committee voted Friday to censure GOP Reps. Liz Cheney and Adam Kinzinger, in part for their roles on the House select committee investigating the Jan. 6 attack on the U.S. Capitol.

“Whereas, Representatives Cheney and Kinzinger are participating in a Democrat-led persecution of ordinary citizens engaged in legitimate political discourse, and they are both utilizing their past professed political affiliation to mask Democrat abuse of prosecutorial power for partisan purposes, therefore, be it resolved, That the Republican National Committee hereby formally censures Representatives Liz Cheney of Wyoming and Adam Kinzinger of Illinois and shall immediately cease any and all support of them as members of the Republican Party for their behavior which has been destructive to the institution of the U.S. House of Representatives, the Republican Party and our republic, and is inconsistent with the position of the Conference,” according to resolution text obtained by ABC News and passed by voice vote at the RNC’s annual winter meeting in Salt Lake City, Utah.

“Liz Cheney and Adam Kinzinger crossed a line. They chose to join Nancy Pelosi in a Democrat-led persecution of ordinary citizens who engaged in legitimate political discourse that had nothing to do with violence at the Capitol. That’s why Republican National Committee members and myself overwhelmingly support this resolution,” RNC Chairwoman Ronna McDaniel said in a statement after the vote.

Her statement notably attempted to clarify the resolution’s “legitimate political discourse” language, adding the words, “that had nothing to do with violence at the Capitol.”

In response to the RNC resolution language about Jan. 6 and the “legitimate political discourse” it said took place, Cheney tweeted out a New York Times video depicting the violent reality of that day.

“This was January 6th. This is not “legitimate political discourse,” she tweeted, with the video attached.

“Cheney and Kinzinger have engaged in actions in their positions as members of the January 6th Select Committee not befitting Republican members of Congress,” and “seem intent on advancing a political agenda to buoy the Democrat Party’s bleak prospects in the upcoming midterm elections,” the resolution also reads.

Both Cheney and Kinzinger have been vocal in their refusal to embrace former President Donald Trump’s baseless claims of election fraud, and were among the 10 Republicans who voted to impeach the former president for “incitement of an insurrection”– to the disdain of many others in the GOP, who have since been overtly critical of the two lawmakers.

Cheney faces an arduous primary challenge to maintain her Wyoming seat, while Kinzinger will not be running for reelection in Illinois.

“The Conference must not be sabotaged by Representatives Liz Cheney and Adam Kinzinger, who have demonstrated, with actions and words, that they support Democrat efforts to destroy President Trump more than they support winning back a Republican majority in 2022,” the resolution reads.

The censure language that the 168-member body approved Friday is a diluted version of an original text pushed by Maryland committeeman David Bossie that initially called for the expulsion of the pair from the party.

The resolution is non-binding, given the RNC’s inability to forcibly remove a member from office, but is not without political consequence, and is patently illustrative of the ironclad grip Trump still has on the party, even without an address on Pennsylvania Avenue.

If the larger conference of Republicans decides to vote in favor of a censure, candidates are likely to be less vocal about their criticisms of the former president, and may even be willing to embrace unverified theories about election fraud to keep within Trump’s good graces and avoid consternation from the national party.

Both Cheney and Kinzinger struck back at the censure preemptively Thursday evening. Kinzinger tweeted, after the unanimous passage, that he is “now even more committed to fighting conspiracies and lies.”

“I’m a constitutional conservative and I do not recognize those in my party who have abandoned the Constitution to embrace Donald Trump,” Cheney said in a statement. “History will be their judge. I will never stop fighting for our constitutional republic. No matter what.”

On Friday morning, House Republican Leader Kevin McCarthy, R-Calif., did not respond to reporter questions regarding the potential censure.

Yet, not all Republicans are on board with the RNC action.

“Shame falls on a party that would censure persons of conscience, who seek truth in the face of vitriol. Honor attaches to Liz Cheney and Adam Kinzinger for seeking truth even when doing so comes at great personal cost,” Romney said.

Who is Harriet Hageman, the Trump-backed candidate who beat Liz Cheney?