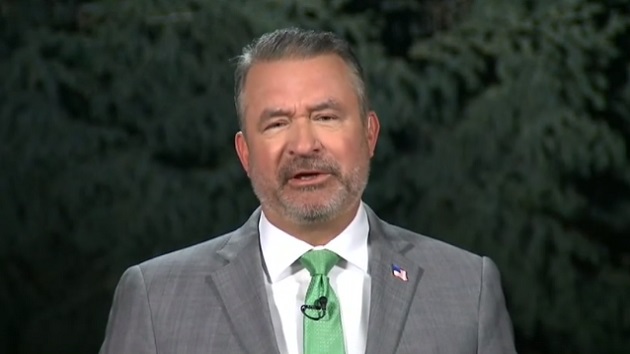 (WASHINGTON) — Rep. Don Bacon, R-Neb., warned Sunday that there is a concerning risk of a default on the federal government’s debts if Democrats and Republicans are unable to compromise on raising the nation’s rapidly approaching borrowing limit.

“I think it is a real threat that both sides have to take serious,” Bacon told ABC “This Week” co-host Jonathan Karl.

“The Republicans were largely elected to get control of reckless funding. That’s the mission that their voters have given them. So, when President [Joe] Biden says he’s going to refuse to negotiate with Republicans on any concessions, I don’t think that’s right either,” Bacon said, referring to Biden’s vow not to tie a debt ceiling increase to cuts to government programs like Medicare and Social Security.

Some conservatives have said they want a deal on the borrowing limit to include a decrease on spending, reviving a similar strategy used during the Obama administration.

Speaker Kevin McCarthy contended last week that the government needed to change its spending, some of which he called “wasteful.”

Bacon on Sunday said that the White House and Democratic lawmakers must come to the table, but the narrow divide in Congress means the goal should be compromise for both parties.

“On our side, we have to realize, we control the House … the Senate is run by the Democrats … and the president is obviously from the Democrat Party, so we can’t get everything we want either,” Bacon said.

After that, Yellen said, the government would use “extraordinary measures” and its current cash flow to stave off a default for several months, likely until at least June. The temporary measures could include cuts to investing in government employees’ retirement funds.

Ultimately, the only way to avoid default is if Congress authorizes more borrowing. The Biden administration has said it will seek to pass only a “clean” increase in the limit without any related cuts.

Bacon said on “This Week” that “I want our side to negotiate with the Democrats in good faith, but President Biden has to also negotiate.”

“He can’t say he refuses to negotiate. That’s a nonstarter as well,” Bacon argued, “because the mission we’ve been given is to control reckless spending, which has been not the only contributor but one of the main contributors to inflation.”

The Nebraska lawmaker said the president hadn’t yet reached out to him on the debt ceiling after reports surfaced this week that the administration had begun contacting Republicans who they believe might vote with Democrats to raise the limit.

“In the last two years, he’s invited the Republican leadership to the White House twice. That’s not a very good record,” Bacon said. “And we’ve got to do our part, too.”

Separately, Bacon said he supports Attorney General Merrick Garland’s appointment of a special counsel to investigate Biden’s handling of classified documents after some sensitive materials from Biden’s time as vice president were found to still be in his possession, including at an old office he used.

Other documents with classified markings were also found at Biden’s home in Delaware, according to the White House.

Bacon noted differences between Biden’s handling of the issue — including cooperating with the National Archives and the Department of Justice — and former President Donald Trump’s reluctance to hand over similar documents. But equal treatment was warranted in the eyes of the public, Bacon said.

“I think the American people see how President Trump’s been treated on one hand and they want to see a sense of fairness,” he said. “Granted, the situations are different, but they’re both about classified information being in areas that’s illegal and the improper handling of highly classified information. So, I think it shows a sense of fairness to have a special counsel for both.”

He criticized some “hypocrisy” from Democrats and Republicans alike in how they were talking about the controversies. He pointed to how Biden had been sharply critical of Trump’s possession of classified materials after leaving office.

Bacon cited “that old adage — ‘if you live in a glass house, do not throw stones.’ And I think that President Biden was caught throwing stones.”