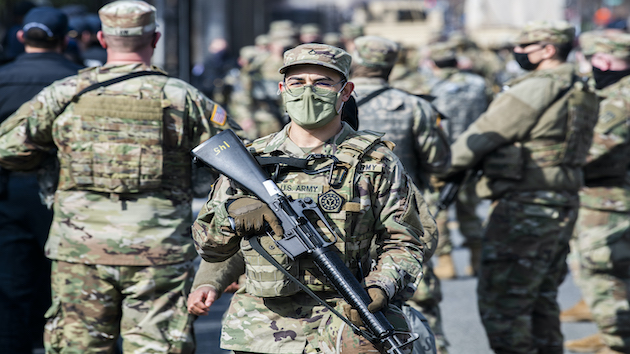 (WASHINGTON) — Congress should hire more Capitol Police officers to boost the overstretched ranks of the department and provide them with better equipment, training and support, according to a study of Capitol security led by retired Army Lt. Gen. Russel Honore released Monday.

Honore and his team on Monday were briefing rank-and-file House lawmakers on their findings and recommendations.

Republicans have criticized House Speaker Nancy Pelosi’s appointment of Honore to conduct the review, pointing to his increasingly partisan tone on Twitter and attacks against Republicans.

“While there may be some worthy recommendations forthcoming, General Honore’s notorious partisan bias calls into question the rationality of appointing him to lead this important security review,” House GOP Leader Kevin McCarthy, R-Calif., said in a statement Sunday. “It also raises the unacceptable possibility that the Speaker desired a certain result: turning the Capitol into a fortress.”

The House is expected to incorporate Honore’s findings into a new funding bill to boost security around the campus and pay for some of the expenses incurred after Jan. 6 — such as the National Guard deployments and the cleanup and repair costs.

Here are six key takeaways from his report:

The report found that Capitol Police were “understaffed, insufficiently equipped, and inadequately trained” to secure the Capitol and members on Jan. 6. It suggested filling all existing vacancies on the force — about 233 officers — and adding another 854 officers in various roles, including as intelligence specialists, civil disturbance units and dignitary protection agents.

If enacted, the additions would make the Capitol Police force, which already has more than 2,000 officers, among the largest department’s in the entire country.

To meet the security needs of the Capitol, officers worked nearly 720,000 overtime hours in Fiscal Year 2021, an “unsustainable” model for the department moving forward.

Additionally, the report recommended adding more explosive-sniffing K9 units to help Capitol Police scan for explosive devices on the Capitol complex, due the number of vacant units and “aging” dogs. It also suggested reestablishing the department’s mounted unit — which was disbanded in 2005 — to serve as a “force multiplier” in high-trafficked areas to help control crowds.

Honore’s team recommended the use of body cameras “to improve police accountability and protect officers from false accusations of misconduct,” and more intelligence support for the department.

The report called for the creation of a permanent Quick Reaction Force to help Capitol Police and other DC law enforcement agencies respond to crises in the district and future emergencies on Capitol Hill — comprised of federal law enforcement officers or a military police battalion under the command of the D.C. National Guard.

The report also recommended the creation of Civil Defense Units within the Capitol Police to be kept on standby when Congress is in session, and for all officers to be given civil disturbance training and their own riot gear to use in emergency situations.

MORE BARRIERS AROUND THE CAPITOL?

The report recommended a “mobile fencing option” that can be assembled and taken down quickly, in place of the temporary fencing currently surrounding the Capitol that requires a “significant” number of personnel to patrol.

A retractable fencing system and more integrated system of cameras, sensors and alarms could “enable an open campus while giving security forces better options to protect the complex and its Members should a threat develop,” the review team wrote in the report.

Tweaking the chain of command

The report found that the Capitol Police Board’s decision-making process “proved too slow and cumbersome” to effectively respond on Jan. 6, when National Guard troops took hours to arrive on the Capitol grounds to help police clear out the halls of Congress. It recommended allowing the Capitol Police chief to request the help of federal law enforcement and the National Guard in emergencies, without first needing the sign off of the board — an opaque, four-person body that includes the chief, the architect of the Capitol, and the House and Senate sergeants-at-arms, who are appointed by congressional leaders.

The report also recommended an “independent review” of the efficacy of the Capitol Police Board’s “authority” over the department.

“Requiring background checks for identification card holders and employing card readers more widely throughout the complex would decrease insider threat risks and enhance the safety of all Members, staff, and legislative employees,” according to the report.

The report also suggested repairing and securing the doors and windows around the Capitol that were used by rioters to break into the building, and erecting screening portals for staff and visitors around the complex to make it easier for Capitol Police to monitor visitors seeking to enter the building.

Pointing to the increasing number of threats to members of Congress, the report recommended expanding the Dignitary Protection Division’s ranks to better protect lawmakers at home and in Washington. Currently, only members of leadership have full-time security details.

The report also recommended the creation of a new office to “centrally manage” lawmakers’ travel from their districts to the Capitol, in coordination with state and local law enforcement partners.

Why Biden, Republicans fought over Social Security at State of the Union